Taking Along a Piece of the Past

Every incarnation of the Blacklog Valley has been an experiment.  I like to try out new ideas, incorporate new techniques.  The goal is to make the next layout better than the last.  The second Blacklog Valley was built on a wooden grid instead of plywood on sawbucks.  You could stand on it.   But the real breakthrough was using wooden splines on risers to support the track.  The splines were made from furring strips with one inch wooden separators.  To make the curves, I would wrap the furring strips in wet towels and carefully bed them into shape.  The splines formed beautiful curves.  On top was a strip of Homosote cut to fit with a jigsaw.

I really loved those curves -- so much that when we moved from Pennsylvania to South Carolina in the mid-1980s, I dismantled the benchwork, rented a U-Haul, and moved the entire layout myself (I didn't trust the movers to respect those curves).  The layout in South Carolina was reconfigured, but I kept the splines and the loops at either end of a folded dogbone.  Unfortunately, not every experiment was as successful.  The South Carolina layout incorporated a hidden staging yard -- not all that unusual, except that in my case it really was hidden!   There was no way to see the staging yard tracks, and almost no way to reach them either!  Needless to say, when we moved to New Rochelle, New York ten years later, the hidden staging track was eliminated. 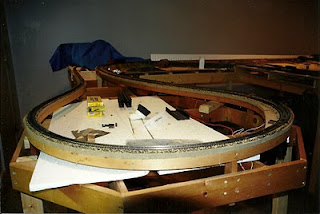 As you can see, when I rebuilt the layout (for the fourth time) I kept those beautiful splines with their graceful curves.   The New York layout was a continuous loop of track with three peninsulas forming the letter E (or maybe the number 3, depending on where you were standing). 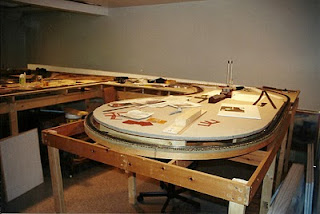 The main line had over 70 feet of track, which allowed for some whopping long trains!  The grandchildren loved it.  Our oldest grandson wanted me to add more and more cars ("More cars, Pop Pop!") and make it go faster and faster.  At one point the train was so long the engine nearly caught up with the caboose! 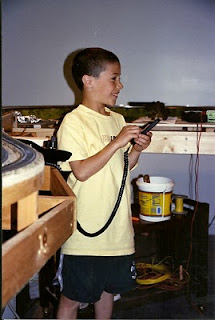 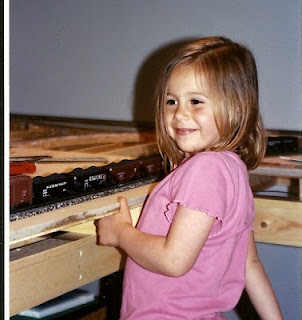 It was fun watching the train go round and round, but after a while it got ... how shall I say this? ... boring!  I began to realize that trains exist to carry cargo and passengers from point to point.  In other words, in order to be interesting, a model railroad has to have a purpose for existing, a "raison d'etre" as the French would say.  The grandkids loved to play with the trains, but in my mind I was already planning for the next incarnation of the Blacklog Valley Railroad, although it would be another ten years until those plans began to bear fruit. 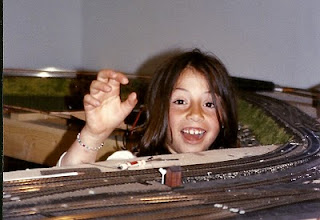 An Introduction to the Blacklog Valley

My interest in trains began at a very early age.  When just a youngster, I wandered away from the back yard and found myself exploring the tracks of the Susquehanna Railroad some six blocks away.  After being picked up and returned home by the local constabulary, my parents decided it was safer to invest in a set of Lionel electric trains.  My dad built a complete layout on two sheets of 4x8 plywood, complete with Plasticville houses and painted green scenery.  That was the beginning of a life-long love of model railroading.

My railroading was sidetracked by college, grad school and seminary, and lay dormant for a decade and a half.  But in the mid-1970's, a friend showed me his train collection, and I was off and running.  The first incarnation of the Blacklog Valley Railroad was constructed in the dank basement of my first parsonage on two sheets of plywood set on sawbucks.  As you might expect, the plywood sagged over time, creating an unintended valley in the middle of the layout.  Interestingly, the church I served was located in Mount Union, Pennsylvania, at the junction of the Pennsylvania Railroad mainline and the tiny narrow gauge East Broad Top Railroad.  Thus was born my fascination with narrow gauge. 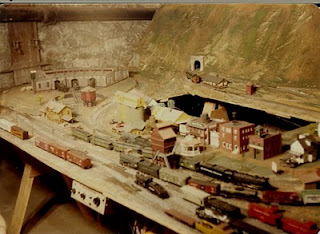 The second Blacklog Valley was in an unfinished attic in my second parsonage.  Located in Hollidaysburg, Pennsylvania, the parsonage was only two blocks from the Pennsy's Sam Ray Shops, a major car repair facility on their Philadelphia to Pittsburgh route.  A few miles away lay Altoona, with a huge locomotive repair center.   I determined to build a larger and sturdier model railroad than my first effort.  The benchwork was a massive wooden grid of 1x4 boards supported by 2x2 legs.  It was strong enough to stand on!   But the Blacklog Valley Railroad of my imagination never got much beyond the benchwork stage.  Nevertheless, the bug had bitten, and when we moved to South Carolina, I was ready to begin work on the third version of the BVRR.
Posted by Russ Norris, MMR at 6:00 AM No comments: