The town of Mount Union marked the northern terminus of the East Broad Top narrow gauge railroad and its junction with the Pennsylvania Railroad. While Broad Top coal was one reason for the town's importance, it was not the only local industry. Mount Union was also home to three large brickyards, or refractories, where ganister rock (a mineral found in several locations along the EBT) was quarried, crushed, and made into high temperature firebricks for the steel mills of Pittsburgh.  In their heyday, North American Refractories (NARCO), General Refractories (GREFCO) and the huge Harbison Walker plant employed thousands of workers and were a primary source of employment for the citizens of Mount Union and the surrounding area.   Here is an early post card view of the Harbison Walker refractory in Mount Union. 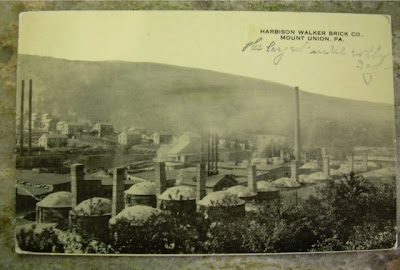 The Harbison Walker facility was located at the foot of Jack's Mountain, seen in the background, a major source of ganister rock on both sides of the Juniata River.  The huge size of the refractory is best seen from an aerial view.  Below you can see the long rows of kilns, where the yellowish bricks were fired at high temperatures, and the associated smoke stacks to vent off the heat and smoke from the fires. In the early days, kilns were fired with coal or coke.  Toward the end of its existence, H-W had made the transition to natural gas, which was plentiful, cheap, and less toxic than coal.  The tracks in the foreground are dual gauge for the EBT and the PRR. 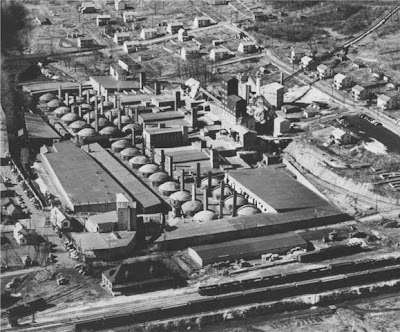 Across town, North American Refractories, or NARCO, was located on the banks of the Juniata and was served by a spur of the PRR.  On the lower left, below, you can see the roofs of standard gauge boxcars in which the newly fired bricks would be shipped out on the Pennsy to steel mills east and west. 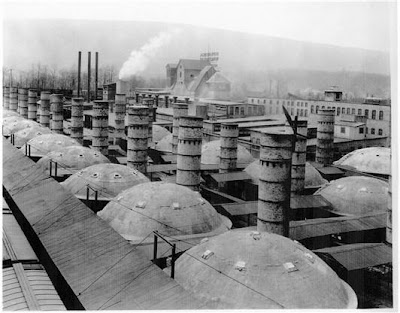 When I began to plan my own layout, I knew that I wanted to include a smaller version of these bustling industries.  The town of Blacklog, with its dual gauge yard and coal cleaning plant, was modeled after Mount Union.  So it seemed reasonable that Blacklog include a brickyard as well.  I had explored the hills around the Harbison Walker plant when I lived in Mount Union, and I knew I wanted my brickyard to resemble a miniature version of that facility.  I was inspired by a close-up view of the refractory in a photograph provided by the Mount Union Area Historical Society. 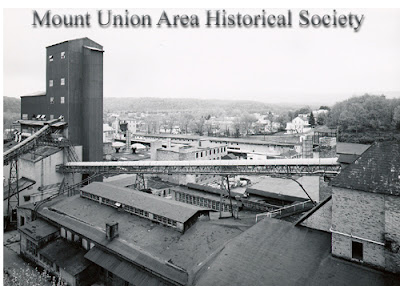 I particularly wanted to reproduce the complexity of the brickyard, with conveyors bringing ganister rock down from the quarries on Jack's Mountain, the large crusher to the left center, the kilns and stacks in the background, and the variety of structures, roofs, and building materials in the photograph.

For the crusher, I used a Walther's Glacier Gravel plant kit, 933-3062, which would be connected to quarries on a nearby mountainside by combining several of the Modern Conveyor kits (933-3518).  Here you can see the crusher on the left, served by two tracks.  The Blacklog Valley main line runs under the conveyor as it loops back around the town.  The mountain on the right was made of layers of 2 inch pink foam insulation, stacked to suggest receding terraces from years of quarrying ganister from the mountainside.  In the lower right corner is the dual gauge EBT wye. 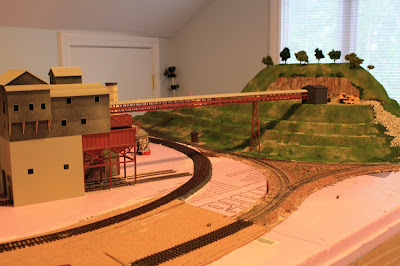 An Easton Mill building by Railway Design Associates would be added later to provide a place for shaping and preparing the firebricks for the ovens.  There would also have to be several large warehouses to hold the finished products for shipment.  All of this would need at least five industrial spurs to service the plant.  Here I am laying out the brickyard to get a feel for how it might look. 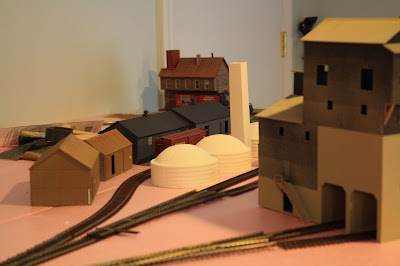 While most of the structures in the refractory were commercially available for kitbashing, I was at a loss as to how to model the kilns.  At first I was attracted to the wonderfully detailed resin kilns from Model Railstuff (Walthers 506-660) with massive matching stacks (506-680).  But after spending more than $75.00 for one kiln and stack, I started looking for an alternative.  After more than a year of searching, I stumbled over a set of cast plaster kilns on eBay from Imported Specialties out of Columbus, Ohio, which were about a third the price of the resin models.   The plaster kilns were pure white.  The following photo shows one of the kilns after spraying wiyth Model Master 1963 Desert Sand.  The paint was as close as I could get to the color of the kilns and stacks at Mount Union. 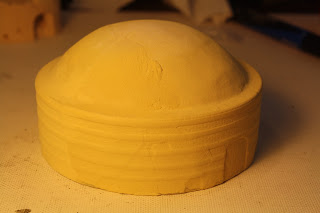 Apparently, the maker of these kilns no longer exists; but eventually I was able to accumulate a total of six kilns on eBay, some of which had been broken and glued back together.  Still, beggars can't be choosers, and I felt that when painted and weathered, the cracks would hardly be noticeable.  That turned out to be correct, as you shall see in the next post, when I continue the story of how I built the Blacklog Refractories Company, or BREFCO for short.
Posted by Russ Norris, MMR at 7:39 AM 2 comments: