My first thought in converting the Mantua switcher to EBT no. 3 was to leave the Pittman open frame motor in it.  But would it work?  I wanted to convert the 0-6-0 to DCC.  I had never tried using DCC on a Pittman motor.  I contacted Wayne Weiss, better known as the "Loco Doc", who said the main problem in using an open frame motor is to isolate it from the frame of the locomotive.  DCC motors must be insulated from the engine.  Wayne suggested the simple fix of slipping a piece of insulation around the spring wire that holds the motor brush in place.  One brush is isolated, the other gets power from the wheels and frame of the engine.  This is the brush that must be isolated.  I tried this trick, and it did work ... sort of.  The motor was indeed insulated from the locomotive frame; but I found that the thickness of the insulation forced the brush tighter against the rotor, leading to problems when I tried DCC. 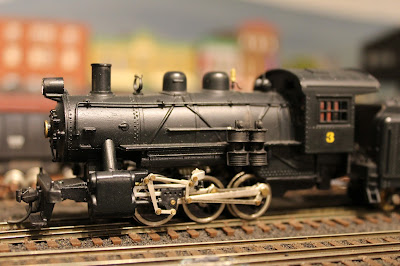 After tinkering with the open frame motor for a week or so, I was able to run the engine back and forth on my yard tracks, but it ran slow in forward and took off like a rabbit in reverse. Also, I could not get the DCC chuff rate to coordinate with the rotation of the drivers.   Digging through my scrap box, I found a couple more Mantua engines, and tried replacing the open frame motor in EBT no. 3 with one from another 0-6-0.  But the problems persisted.  Finally, I had to admit defeat. The only practical solution was to replace the Pittman motor with a good can motor.  Fortunately, I had a 16 x 20 mm NWSL Sagami can motor on hand, which seemed to fit the available space in the Mantua engine.  All I had to do was replace the open frame motor with the Sagami.

Easier said than done!  The Mantua motor turned a nylon worm, which engaged with a nylon worm gear on the main axle, driving the engine.  The simplest solution was to remove the worm from the motor shaft and place it on the can motor shaft.  But  here's where it got interesting.  The worm sat on 2.3 mm shaft; the Sagami motor shaft was only 1.5 mm.  Not only did I have to remove the worm from the old motor, I had to install it on a motor with a smaller diameter shaft.

Not having any experience with this, I contacted NWSL via email and sought the advice of their technical department.  I learned that I would have to use a wheel puller to remove the worm from the old motor shaft, then insert bushings into the worm that would allow it to slip on to the can motor shaft.  The good folks at NWSL told me that once the worm was in place, Loktite super glue couild be applied to the bushings, which when dry would hold the worm firmly in place.

First challenge.  I didn't own a wheel puller.  But NWSL sells them in several sizes, so I ordered one. When it arrived in the mail, I set up the device to hold the worm in place while a screw pressed the shaft, pushing it through the worm. 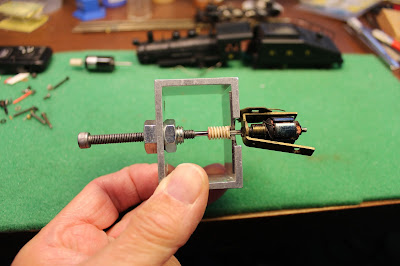 The miniature piston pushed completely through the worm, forcing the motor shaft out the other end. 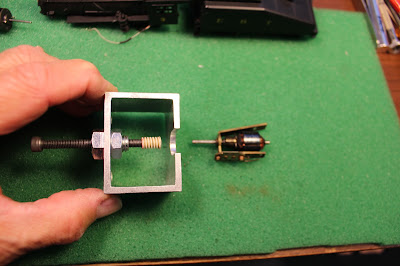 I was able to twist the worm off the wheel puller with little effort.  Say, a guy could get used to this! (Remember, I had never tried to replace a motor before.  The biggest problem was getting the courage up to try.  Once you do, it's surprisingly easy!) 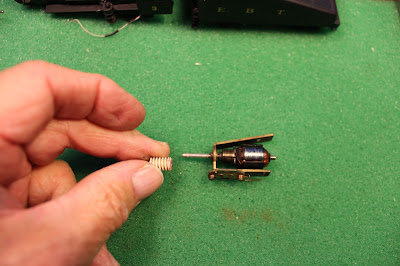 Step two was placing the worm on the can motor shaft.  I had ordered a pair of NWSL bushings with an ID of 1.5 mm and an OD of 2.4.  I tested the bushings on the can motor.  They slipped on easily -- maybe a bit TOO easily!  But another email from NWSL revealed the bushings are made to slide on the shaft, allowing for easy adjustment before bonding them in place. 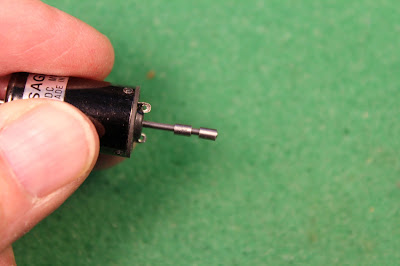 Although the bushings slid on to the can motor shaft easily, the same could not be said for the worm! Inserting the bushings into each end of the worm proved to be a challenge.  They were so small, and even after chamfering the edges gently with a fine file, they just did not want to go into the worm. 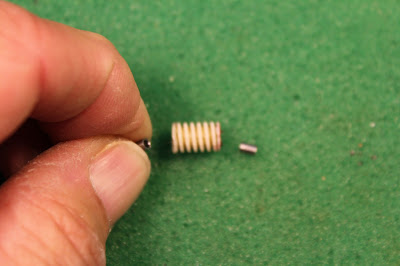 At this point, I used a different tool to simplify the job -- a Precision Arbor Press from Micro Mark that I picked up at a hobby show a few years ago.  The Press-It does the reverse of the wheel puller. It pushes small parts together.  I mounted the worm in the press and carefully centered the punch over a bushing.  To keep the punch and bushing from slipping, I placed a small steel ruler between them and applied pressure.  Pop!  The bushing slipped snugly into the worm.  I repeated the process at the other end, with equally good results. 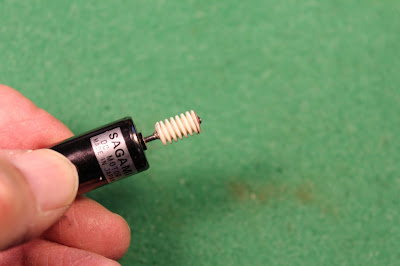 The bushings were tight in the worm, allowing the whole assembly to slide easily on to the motor shaft.  I carefully applied Loktite to both bushings and let them dry for 24 hours to make sure the bond was secure.

The last step in remotoring was to place the motor on the engine frame so that the worm engaged the worm gear properly.  But the motor has to be isolated from the frame electrically.  Again, the folks at NWSL were helpful guides.  They recommended securing the motor to the frame with silicone -- with Permatex Ultra-Black Gasket Maker to be precise.  When it cures, the silicone is a permanent bond which both insulates and secures the motor.  The rubber-like silicone also reduces vibration. Following the advice from NWSL, I placed a blob of silicone on the engine frame, so that the motor would tilt at the same angle as the open frame motor, allowing the gears to mesh.  NWSL also recommended inserting a piece of .008" brass wire between the worm and the worm gear to allow space for the gears to move when the silicone set.

This turned out to be easier said than done (again!)  The silicone goo was soupy when it came from the tube, and couldn't provide support for the motor, which kept falling flat into the Permatex.  The wire kept slipping out from between the worm and gear teeth.  It took some time and some effort to figure out how to hold the motor in place while the silicone stiffened. 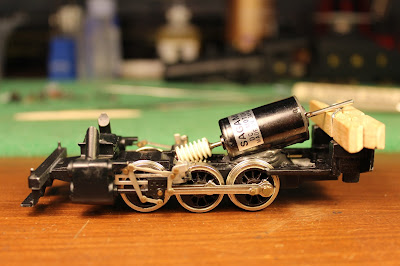 I ended up holding the worm and worm gear in place with my finger until the silicone began to set up.  I also used a small clothespin to prop up the motor shaft.  Some experimentation was required to get the right angle.  I let the silicone set for 48 hours before playing with the motor.  By then the Sagami seemed tightly bonded to the frame, and the motor was safely insulated. 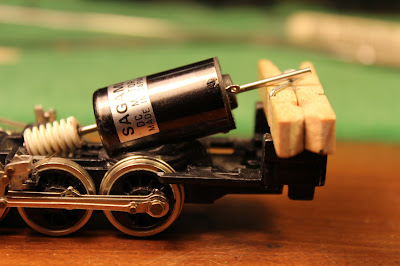 When the bond was secure, I tried running the motor.  The entire engine began to shake and vibrate, then stopped altogether.  A careful examination revealed that the silicone goo had run down the side of the frame and bonded with the rear driver.  Fortinately, the rubbery material is easy to cut with a hobby knife.  A little cutting and cleaning released the driver and allowed the engine to move.  The following brief You Tube video shows the engine operating on my layout.  (Rivet counters will notice that the valve gear is incorrect.  That will be fixed when the project is completed.)

The next installment in this series will detail how I installed and programmed a SoundTraxx Econami decoder in the tender, with "sugar cube" speaker and keep alive.
Posted by Russ Norris, MMR at 1:24 PM No comments:

The East Broad Top was a 3 foot narrow gauge railroad that ran from Mount Union to the coal fields on Broad Top Mountain in southern Huntingdon County, Pennsylvania.  When the railroad ended common carrier operations in 1956, they owned six narrow gauge steam engines, along with two standard gauge 0-6-0 switchers stationed in Mount Union: Numbers 3 and 6.  Ironically, number 6 was the older engine, built by Baldwin in 1907 and seldom used in the 1950s.  It was the smaller of the two, with 48 inch drivers, 17x24 cylinders, weighing 84,200 pounds with a tractive effort of 19,600.  Number 6 was sold to the Whitewater Valley Railroad in 1975, where it remains to this day. 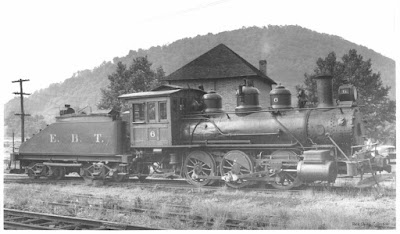 The other standard gauge switcher was number 3, also a Baldwin, built in 1923.  Number 3 was a heavier engine by far, with 51 inch drivers and 21x26 cylinders.  It weighed in at 137,000 pounds and produced a tractive force of 33,500.  It is currently stored inoperable in the Mount Union engine house.  Both nos. 3 and 6 were equipped with standard and narrow gauge couplers for operating in the dual gauge Mount Union yard.

To my knowledge, there has never been a commercial model of either engine, although an article by Dean Mellander appeared in the December 1990 issue of Railroad Model Craftsman describing how he built a model of EBT no. 6 by kitbashing an MDC Roundhouse 0-6-0 kit.

I have long wanted to include a working model of one or both switchers, to add to the realism of my own dual gauge yard, a compressed version of the one at Mount Union.  After reading Mellander's article, I thought of perhaps using the MDC 0-6-0 to represent no. 6, and even went so far as to acquire a kit.  Yet since no. 6 was rarely used in the era I model (around 1950) it seemed preferable to create a model of number 3.  But I was at a loss as to where to start.

A few years ago, I saw a modified Mantua 0-6-0 on eBay that had been painted to represent no. 3.  It was not an identical copy, as can be seen from the following photograph.  But it was "close enough" for my purposes, since it would operate in the background much of the time, and my focus was on the EBT narrow gauge 2-8-2 mikados anyway. 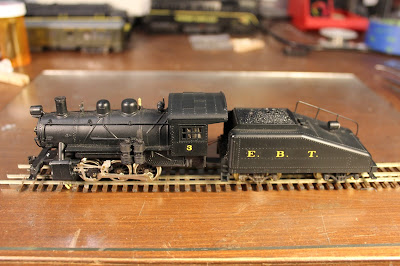 A quick comparison with the preceding photo reveals immediately some glaring differences between the two.  Most obvious is the fact that the Mantua engine has only one sand dome while no. 3 had two.  This suggests that the prototype also had a longer boiler.  There are also differences in the cab, and the cylinders on no. 3 are considerably larger than the model.  But again, I invoked the modeler's Rule Number One ("it's my railroad") and decided to purchase the Mantua engine and see what I could do with it.

In future posts, I will detail how I converted the open frame Pittman motor to a Sagami can motor, removed the worm from the old motor shaft and installed in on the can motor shaft, mounted the new motor and worm using silicone adhesive, installed an LED headlight and put a new SoundTraxx Econami sound decoder in the tender.  All this has proven to be a learning experience for me, and I am looking forward to sharing the story of how I did it.