Like many modelers, I began to experiment with structures from kits.  Many of those projects from decades ago are still around today: a Campbell water tank and bandstand, Fine Scale Miniatures of a two story station and a coal and sand facility.  But my first foray into the wonderful world of scratch building was a coal elevator made from plans and pictures in Model Railroader or Railroad Model Craftsman -- I can't remember which.  Because it was my first, the J. D. Owen coal facility has always had a special place in my memory.

The original plans called for three wooden silos with an overhead structure where coal, having been hauled up by an internal bucket lift, was distributed among the three bins.  I built the silos by wrapping scribed basswood around three (empty) Horseshoe Curve beer cans.  The wooden wrappers were glued to the cans and secured with rubber bans that represented steel bands.   I was delighted with the finished product. 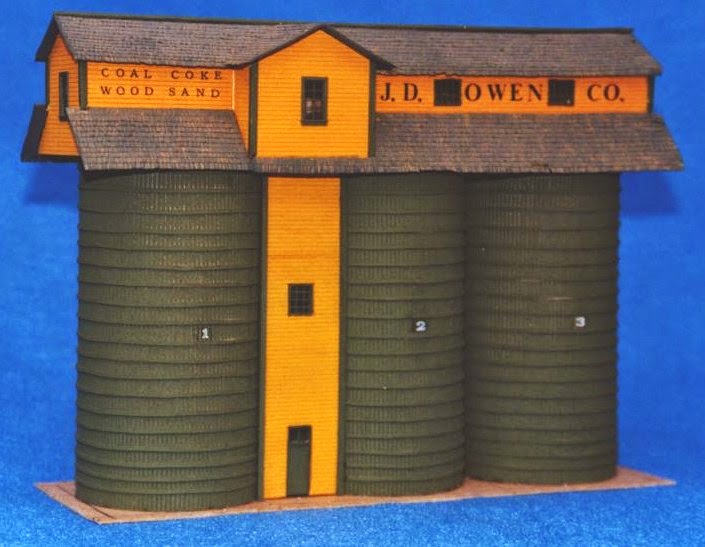 Over the last 40 some years and five layouts, the coal elevator had a place of honor on every model railroad I built.  But the passing of time and the gradual drying of the Ambroid cement that held the structure together led to its slow disintegration.  The final insult was the rotting away of the rubber bands, leaving the entire facility in a state of collapse. 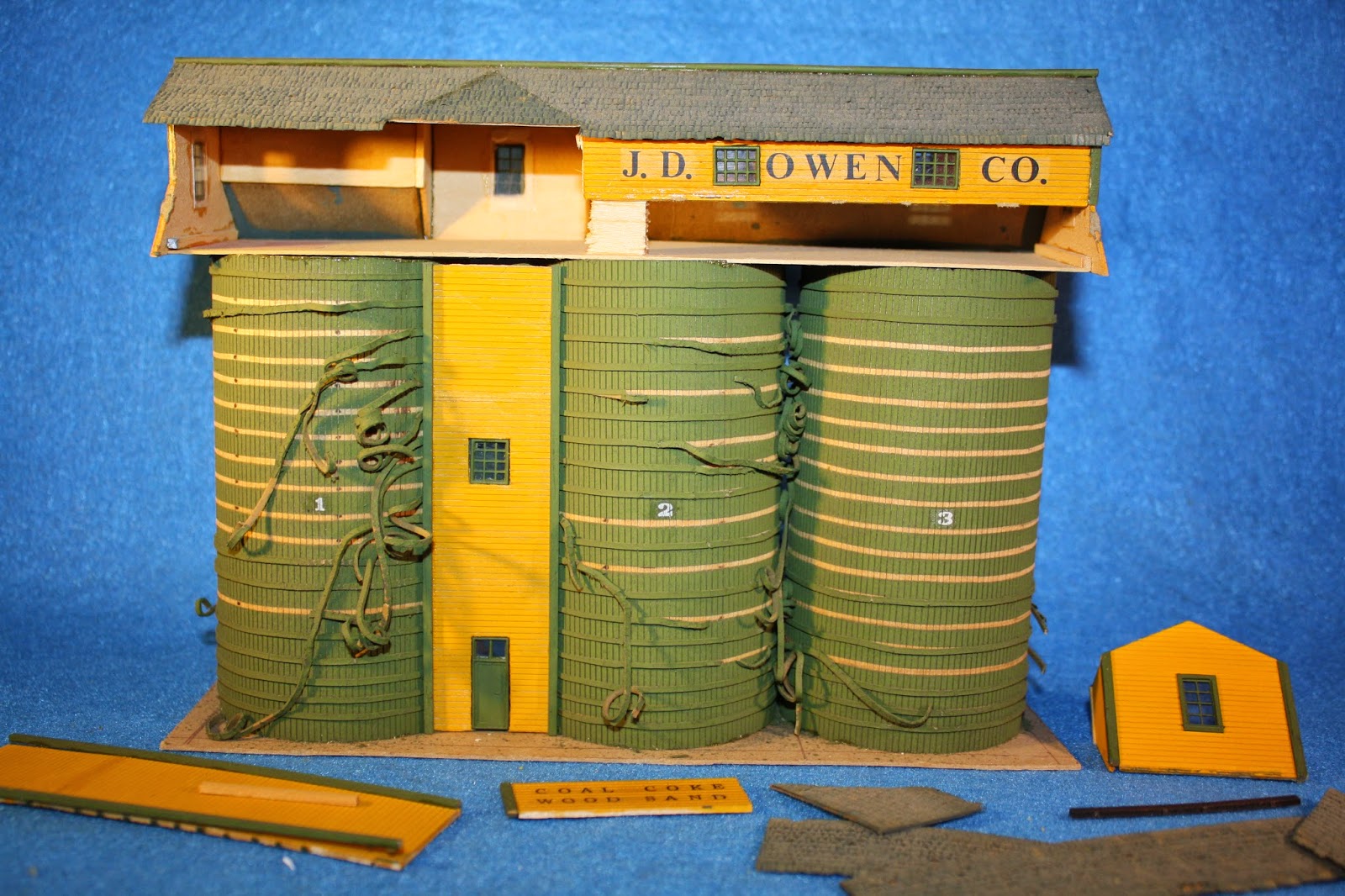 Oh, I played with the idea of rebuilding the structure, but other projects took precedence, and the coal elevator ended up on a shelf where it appeared unlikely to ever appear on the layout again.

Then a wonderful thing happened.  Walther's brought out a reissued Cornerstone kit for the Golden Flame Fuel Company.  One look and I realized that the Walther's kit was a modified version of the original coal facility that had graced my layout for all those years.  The superstructure on the coal elevator was different -- more modern -- and the silos were concrete, not wood; but it was a dead ringer for my ancient scratch built building.

I bought the Cornerstone kit, threw away the elevator roof and superstructure, and tested the J. D. Owen top on the three silos.  The towers of the kit are made of styrene rings that nest together to form the silos.  They were slightly taller than my original design, but discarding one ring from each silo left the towers almost exactly the same height as my original elevator.  I spray painted the towers with Floquil concrete and test fit the parts on my work bench. 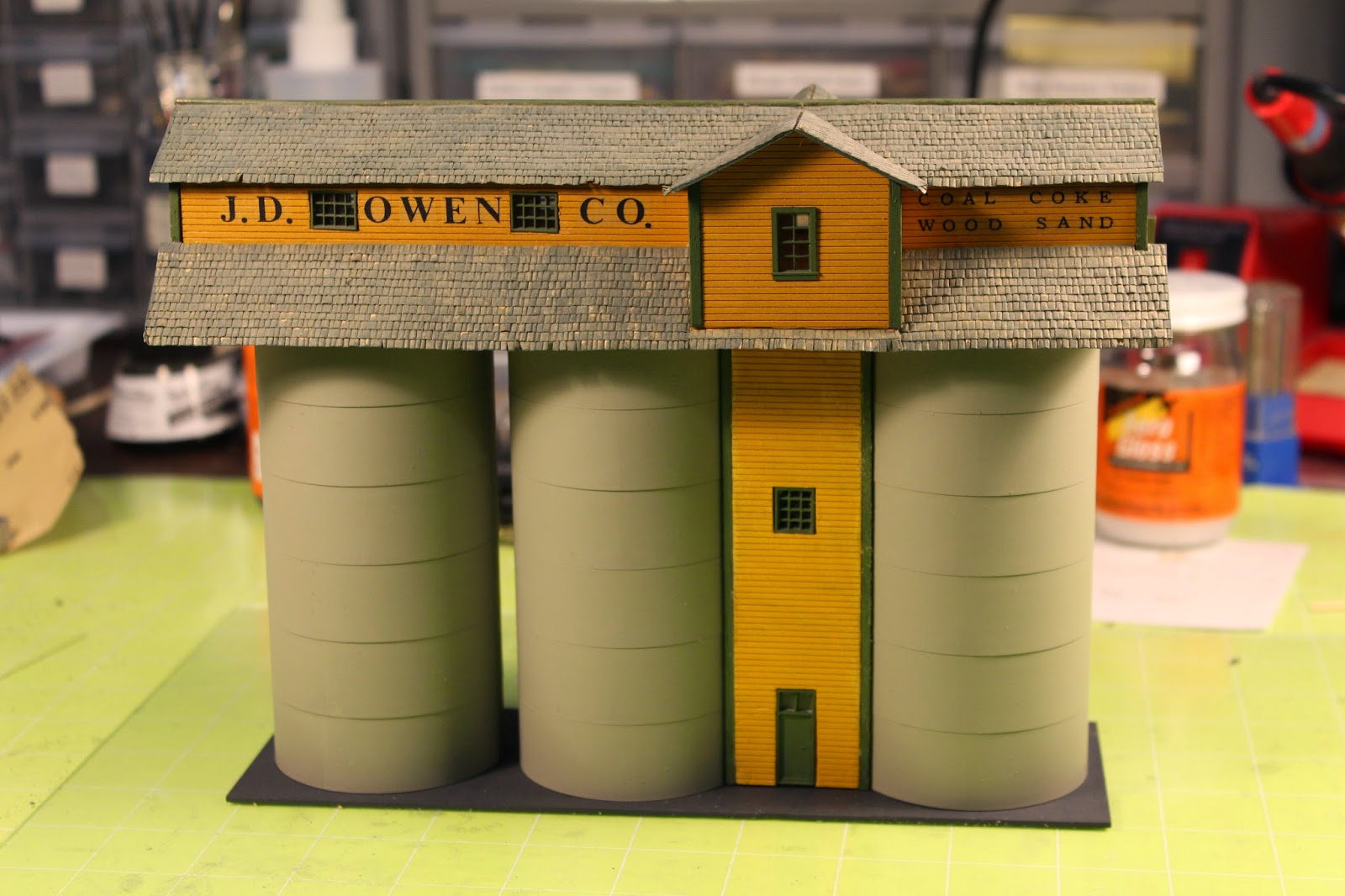 I was ready to move ahead with assembling the structure when friends in the Yahoo! Narrow Gauge Chat group suggested that since the original towers were made from beer cans, it might be fun to make the new silos resemble beer cans!  A couple of folks even sent photos of old farm silos painted to resemble a can of beer.  It didn't take much encouragement; I was up and running!

A quick Google search for beer logos netted dozens of potential candidates for my "three pack" silos. Since I model central Pennsylvania around the year 1950, I needed to find a local brew from that time and place.   I finally selected a logo for Iron City Beer, brewed in Pittsburgh, where East Broad Top coal was used to fire the steel furnaces. 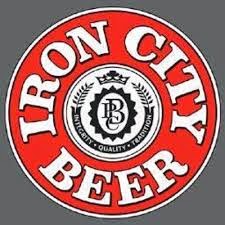 To get a feel for what the finished product would look like, I printed off three Iron City logos on copy paper using my HP ink jet printer.  After cutting them out, I curled them around the three silos and took a picture.  It really looked sharp! I knew I was on the right track. 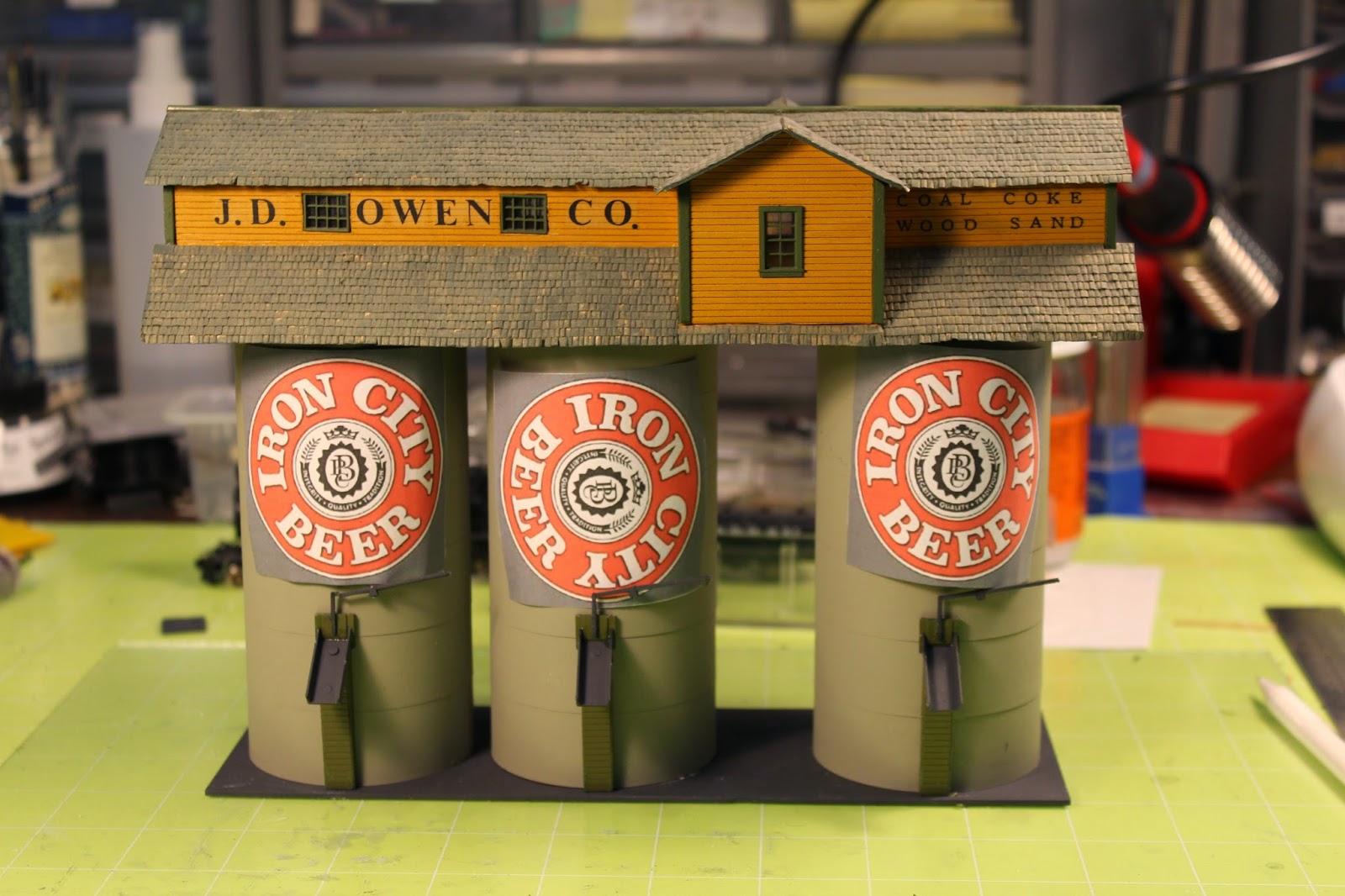 The next step was to print the logos as decals that could be applied to the styrene towers.  I opted to use Testor's decal paper from my local hobby store.  After printing three logos on my ink jet printer and allowing the ink to dry overnight, I sprayed them with Testor's Decal Bonder Spray to fix the ink. The decals were left to dry overnight again before cutting them out and applying them to the towers. Be sure to follow the instructions carefully or you will have a mess trying to slide the decals off the backing and onto the structure.

Once the decals were set in place I applied Microsol from the blue bottle to settle them on the surface of the towers.  This proved difficult because of the size of the logos, and required a lot of finagling. Where the decals had air bubbles, I used a common pin to prick the surface and applied additional Microsol solution.  Two of the decals were still not all I had hoped, and I hoped that weathering would help cover any irregularities.  Before weathering, I sprayed all three towers and the decals with Dull Coat. 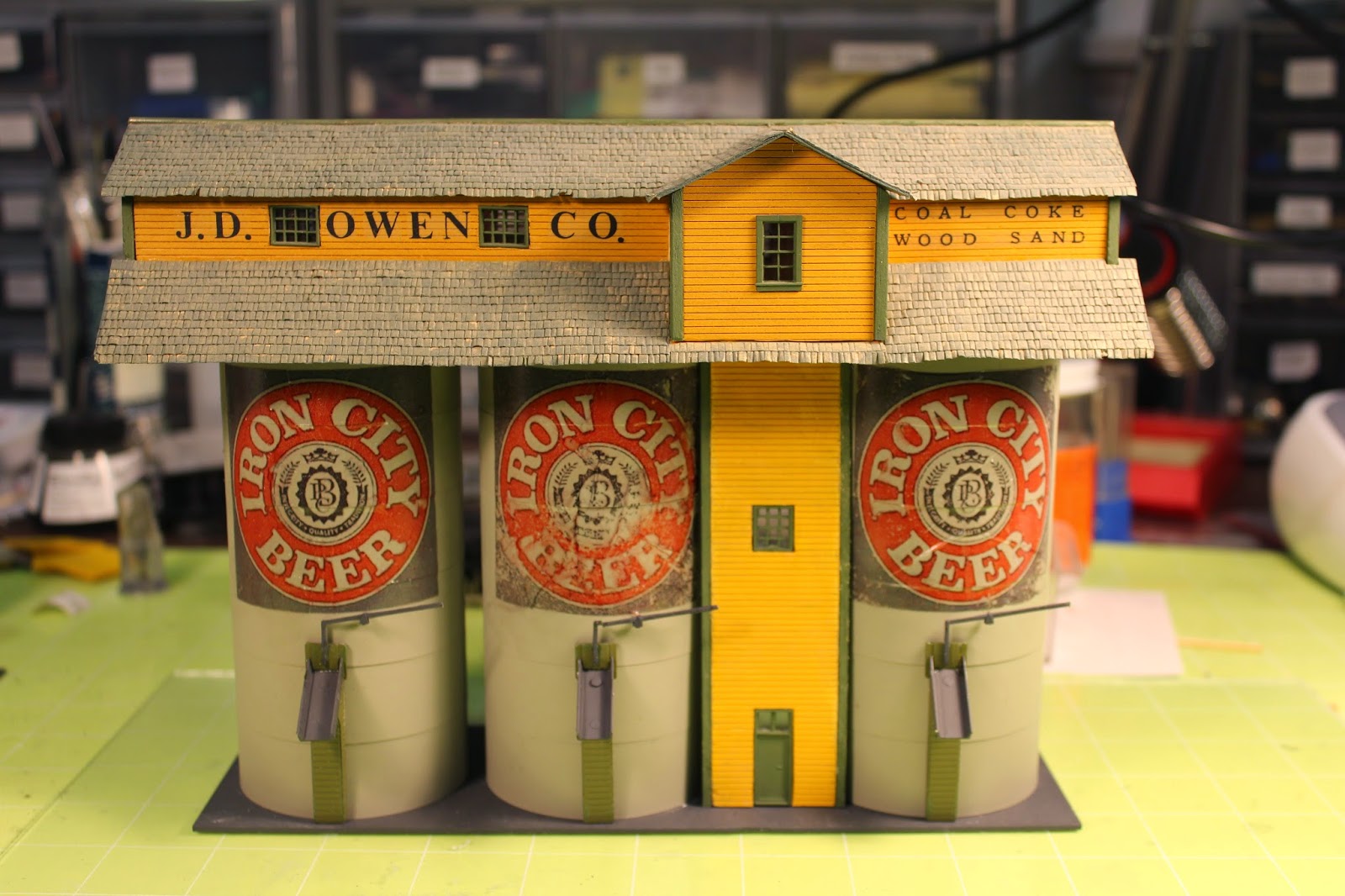 Brick and concrete structures will sometimes emit a white secretion from water seeping into cracks.  I used acrylic white paint to suggest these discolorations.  To do this, I took a small piece of blue painter's tape and ran it just above one of the circular seams in the tower.  Then I dry brushed some of the acrylic to look like discoloration running down the tower.  I even tried the technique over one of the decals where too much touching had removed some of the paint.

After the paint had dried I applied powdered black chalk and MicroMark grimy black weathering powder to suggest years of grime and coal dust accumulated on the towers.  The roof was brushed with grungy gray weathering powder, which came out more of a dirty brown.  The end result was pleasing to me, and the finished structure once again occupies a place of honor on my layout. 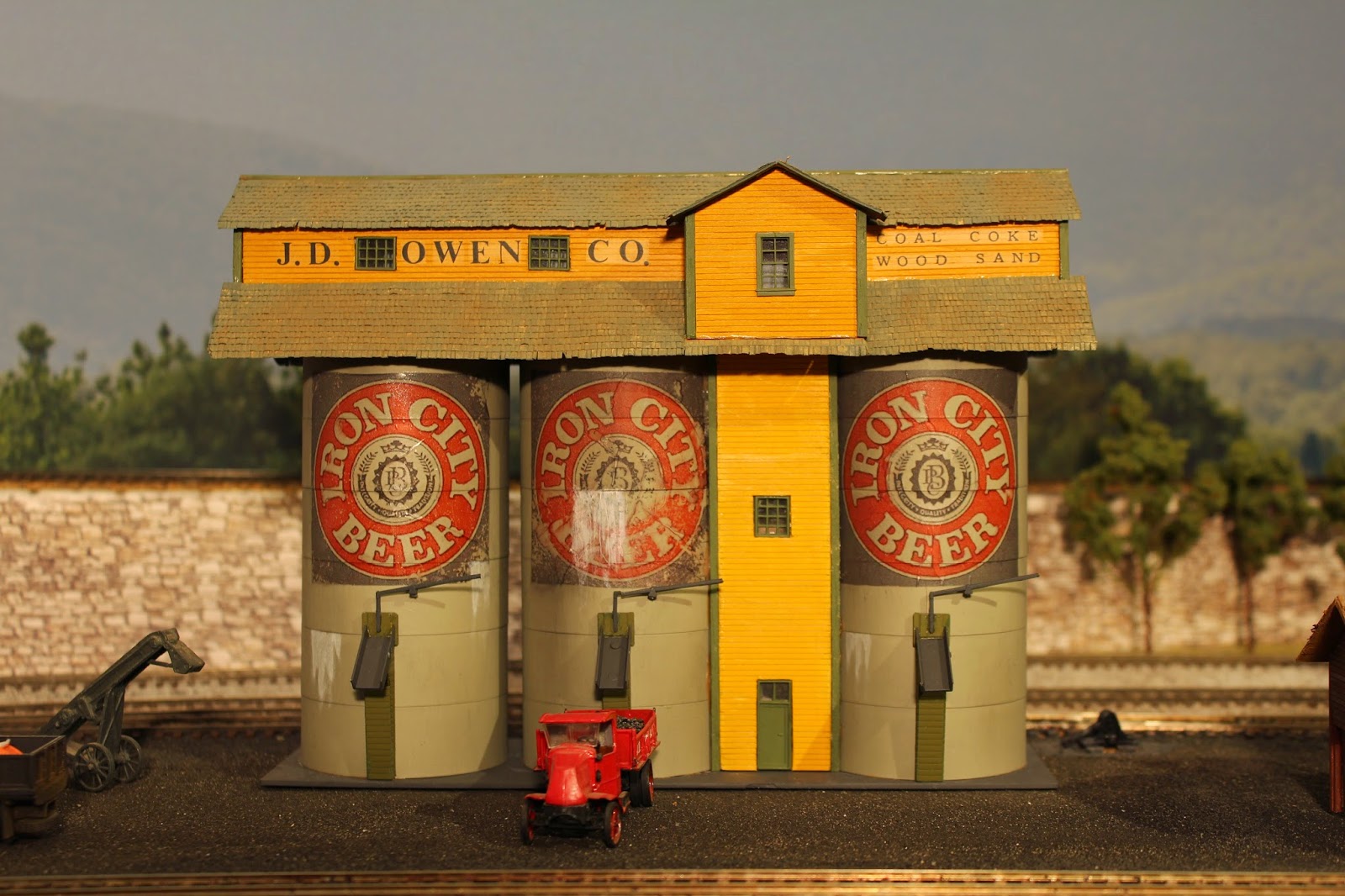 Posted by Russ Norris, MMR at 7:33 PM No comments: