In my previous post I described how I constructed the East Broad Top's longest bridge across the Aughwick Creek in southern Huntingdon County, Pennsylvania.   The bridge passes over a lush, tree covered valley and the old road to Three Springs, as well as the creek.  With the bridge in place, the next step was to create the valley floor and creek bed. 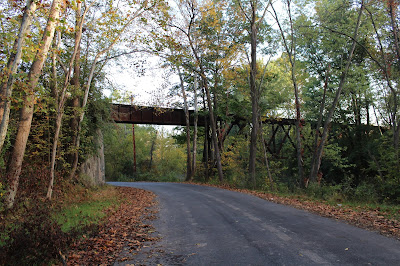 From the photos I took of the bridge, I could see that the creek filled most of the space between the middle support pier and the south pier next to the road. 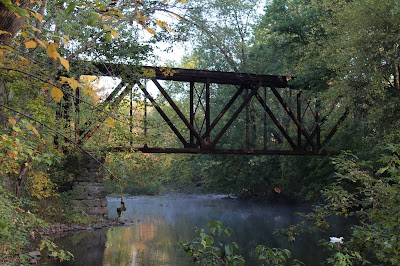 I used a knife and a Surfoam tool to rough out a channel for the creek.  I then lay plaster bandage strips across the bed of the creek to smooth out the bottom, and to prevent leaks when adding the Woodland Scenics Magic Water as described below. 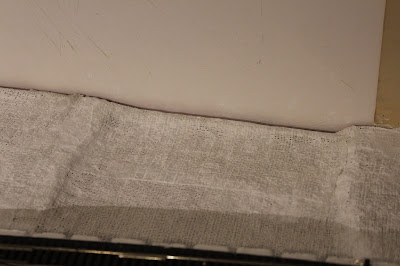 I created the embankments leading up to the bridge also using plaster cloth.  I secured one inch strips of stiff paper between the styrofoam risers and the foam base using a hot glue gun. 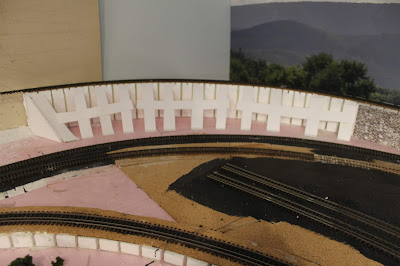 Plaster cloth was then applied horizontally across the paper strips to create the fill. 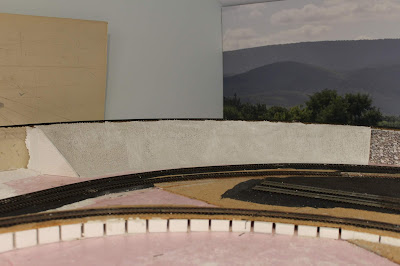 Turning to the Aughwick, I painted the bottom of the creek bed a medium green to suggest depth. 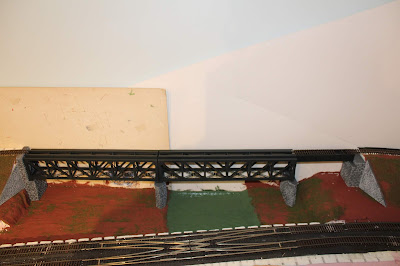 At this point I felt the need to add something behind the bridge -- other than a bare wall!  I have purchased commercial backdrops before and been satisfied with the results.  So I contacted Backdrop Junction and ordered a backdrop with mountains from central Pennsylvania. The backdrop arrived rolled up in a mailer.  I mounted it on a long piece of 1/8 inch Masonite.  Here is what it looked like before being placed on the layout. 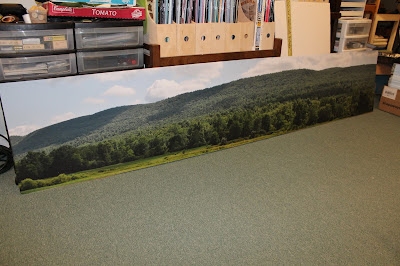 And here is how it looks in place with the bridge in the foreground.  What a difference!

Since my photos of the stream showed water flowing over shallow rocks, I collected various pebbles from my backyard, cleaned them up and glued them to the creek bed,  I added a dead tree that would be partially submerged in the creek. 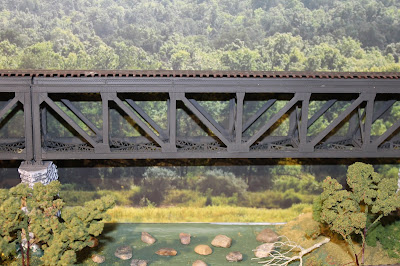 Before adding the Magic Water, I completed detailing the bridge, to avoid dust settling on the water.  The first order of business was to paint the piers and abutments.  Here is what they looked like out of the box -- not very realistic. 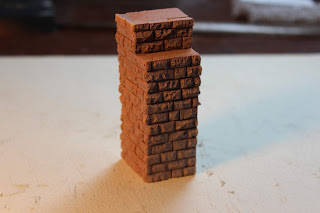 To create the weathered stone bridge abutments and piers, I sprayed them with Model Master FS36081 Euro 1 Gray, leaving the stone work a very dark color. 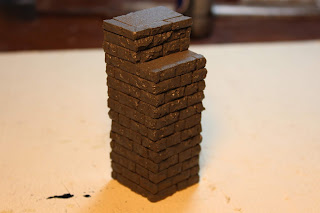 Then I used a sponge applicator to lightly dab the stones with Pan Pastel 28207 Neutral Gray Tint. 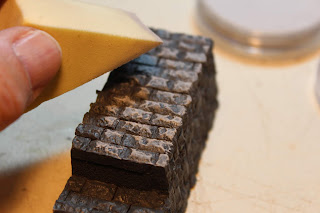 The effect was to give the stones a light gray surface with dark seams and cracks that mimic the prototype. 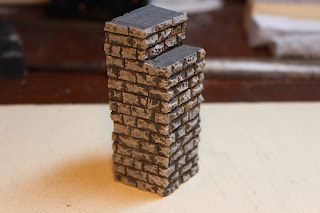 For the bridge approaches, I used the same scenery techniques as on the valley floor.  I discovered that the original approaches were wooden trestles, which were replaced by boney from the mines.  Since I had a large container of boney I collected at the annual EBT Homecoming, I screened it to remove large pieces, and used the fine residue in place of ballast. 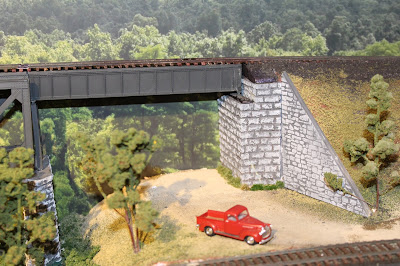 With the bridge and approaches finished, I turned to the Aughwick.  Woodland Scenic's Magic Water is a two part epoxy.  I followed the instructions on the container, mixing two Dixie Cups of epoxy with one cup of Hardener and then stirring the two together for five minutes.  I then poured the mixture into the creek bed.  (I was careful to put a large cookie sheet under the benchwork in case of a leak).  When the "water" was thoroughly cured, I applied thin beads of Woodland Scenics Water Effects.  The beads trailed "downstream" from the pebbles I had glued to the creek bed.  Water Effects takes a while to set, so there is plenty of time to work on it.  I took a stiff brush and stippled the beads to spread them and draw them out a bit.  Water Effects comes out of the bottle thick and white, like glue, but it dries clear.  After a day or two, I finished the creek by lightly dry brushing white craft paint over the ripples, giving the effect of gentle rapids. 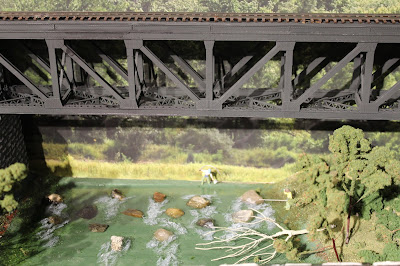 The final touch was the addition of a few Woodland Scenics fly fishermen along the banks of the creek.  As a train rumbles overhead, the fishermen in the creek below are casting for those illusive Aughwick trout!  Watch the action here:  https://youtu.be/KY5kbxaZ1K4