Pursuing the AP Certificate in Scenery

I have been a model railroader for more than forty years, and in that time I have built five different layouts.  Along the way I have also tried my hand at just about every aspect of model railroading, from building the bench work to wiring, from scratchbuilding to kitbashing, from structures to scenery.

A year or so ago, I decided to enter the National Model Railroad Association's Achievement Program and see just how much I have learned.  The AP Program involves a series of certificates in the fundamental skills required to produce a first class model railroad.  So far I have the Electrical and Author certificates, and I am now preparing for certification in Structure building and Scenery.

The Scenery award requires the applicant to finish a minimum of 32 square feet of layout (in HO) with scenery, structures, lighting, and background.  All of this must achieve a measure of realism that meets the approval of the judges.  For the last several years I have been working primarily on one section of my layout -- some 58 square feet, or about a third of the total area -- encompassing the town of Blacklog, Pennsylvania, with its dual gauge yard, coal processing plant, brickyard and other structures.  An additional 15 square feet of finished layout includes the company town of Robertsdale.

Some of my work has appeared in earlier posts.  But now the goal is to finish detailing these areas of my model railroad to meet the requirements of the AP certificate in Scenery.  The following photograph shows some of the area submitted for judging.

The above view shows the Blacklog Refractories plant where firebrick is manufactured for the steel mills of Pittsburgh.  To the right is a quarry where ganister rock, used in making firebrick, is mined and transported to the plant over a long conveyor.  The stacks of the six kilns can be seen behind the conveyor.  The hills in the background are a commercial print of actual Pennsylvania mountains.  The rubble on the hillside is made of kitty litter secured with diluted matte medium.  The brush is Woodland Scenics clump foliage.  Just visible behind the large crusher building in the center you can see some of the brickyard's company houses.  These diminutive structures were based on actual houses in Mount Union, Pennsylvania, built for employees of the local brickyard.  Here is another view of these little homes. 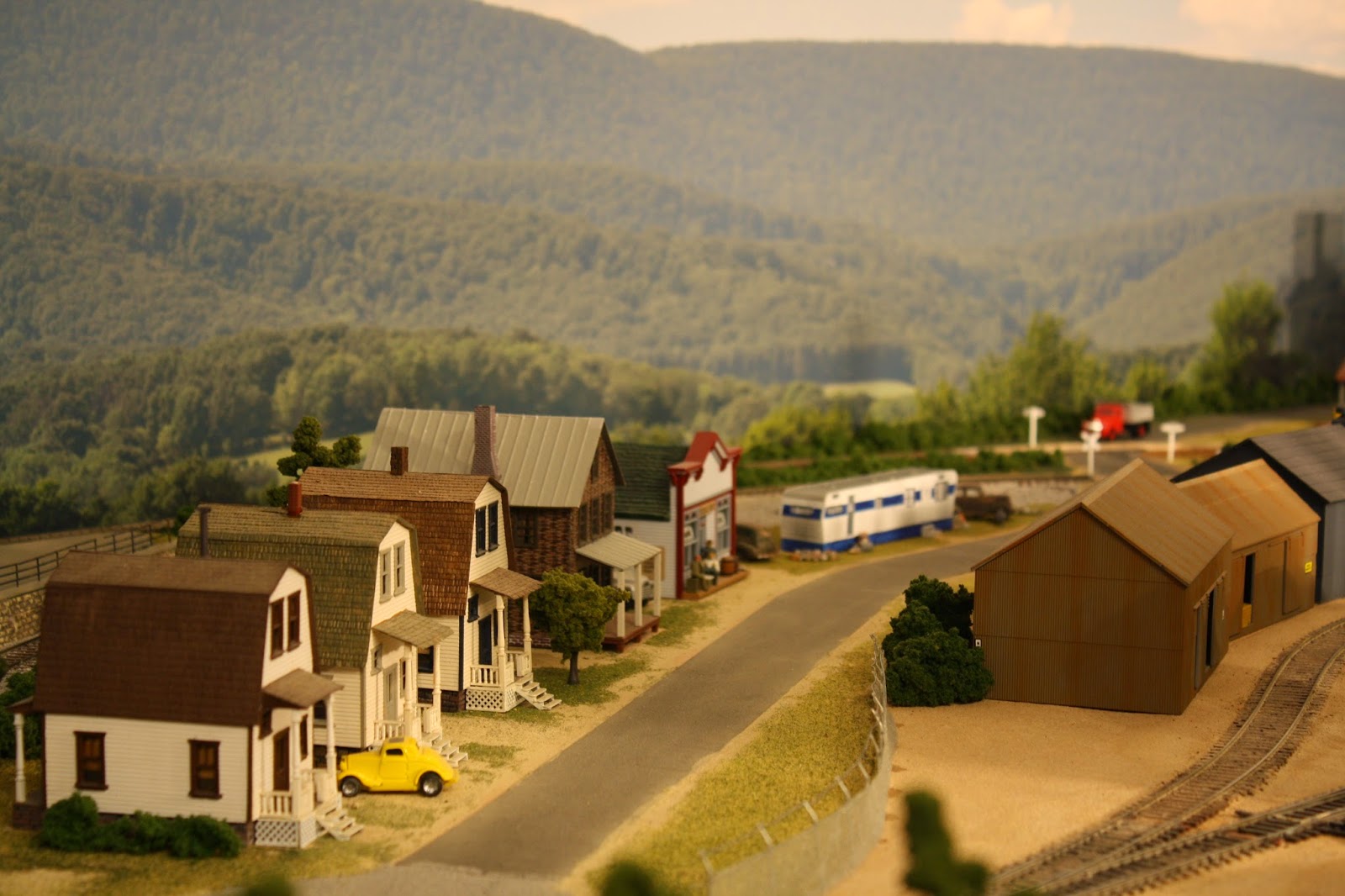 The structures on the right are storage buildings where various kinds of brick are stored until they can be transferred to boxcars and shipped to their destinations.  Beyond the three company houses is a typical central Pennsylvania house of the 1950s clad in "Insulbrick", a kind of asphalt shingle made to resemble brick siding.  The road continues on past a general store and a run down mobile home, until it comes to a small brewery -- the home of the famous Horseshoe Curve Beer! 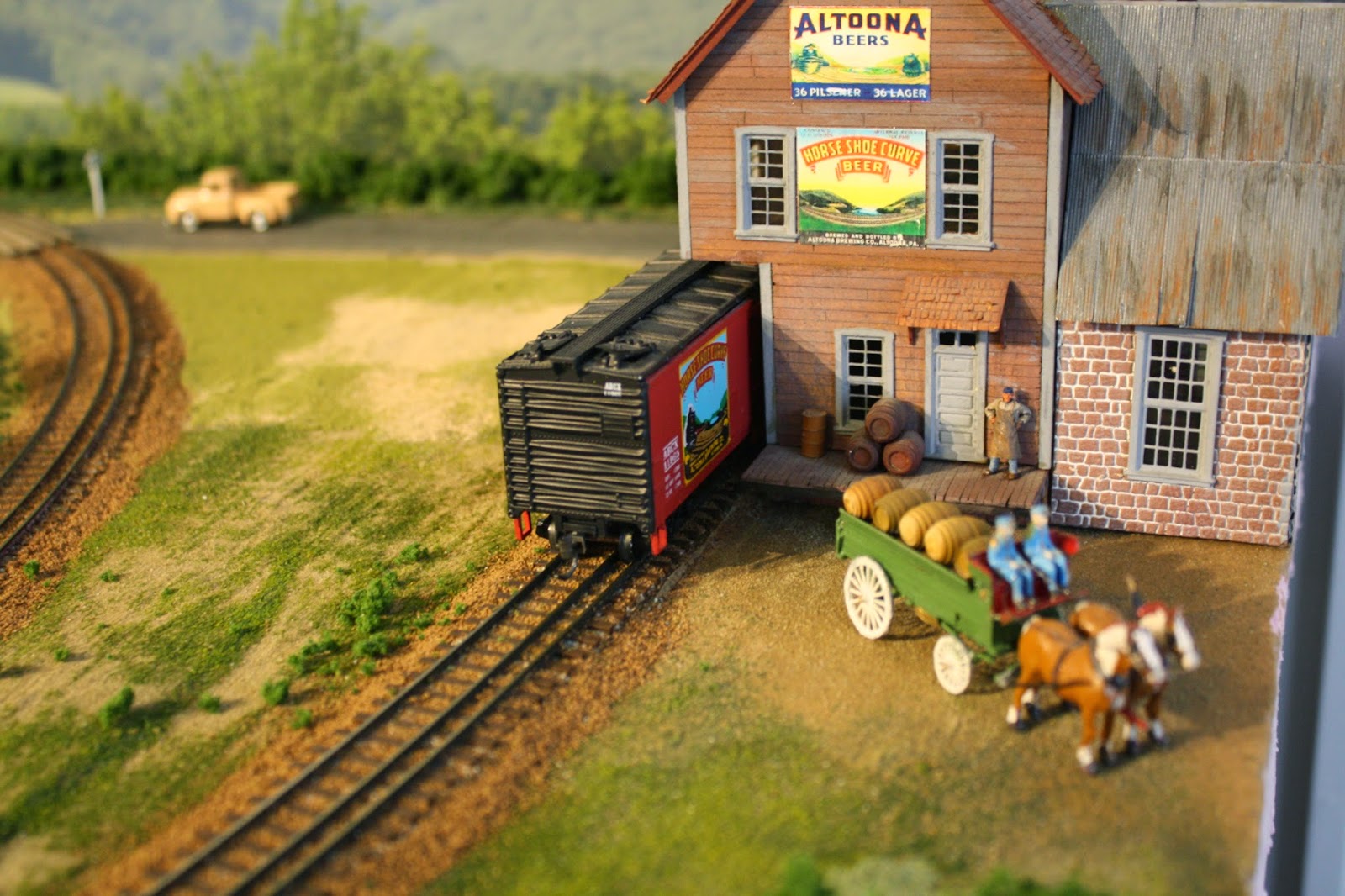 To the left of the brickyard is a large dual gauge yard, where hopper cars full of coal from the mines on Broad Top Mountain are delivered to a washing and sorting facility run by the East Broad Top Railroad.  Like the brickyard and the company houses, this part of the layout is also based on the EBT operation at Mount Union.  In the foreground you can see the narrow gauge hoppers lined up on the dump track.  Beyond the dual gauge tracks are standard gauge tracks holding HO hopper cars to which the coal will be transferred after sorting by size.  From there the cars will be picked up by a standard gauge train that will haul them to their destination. 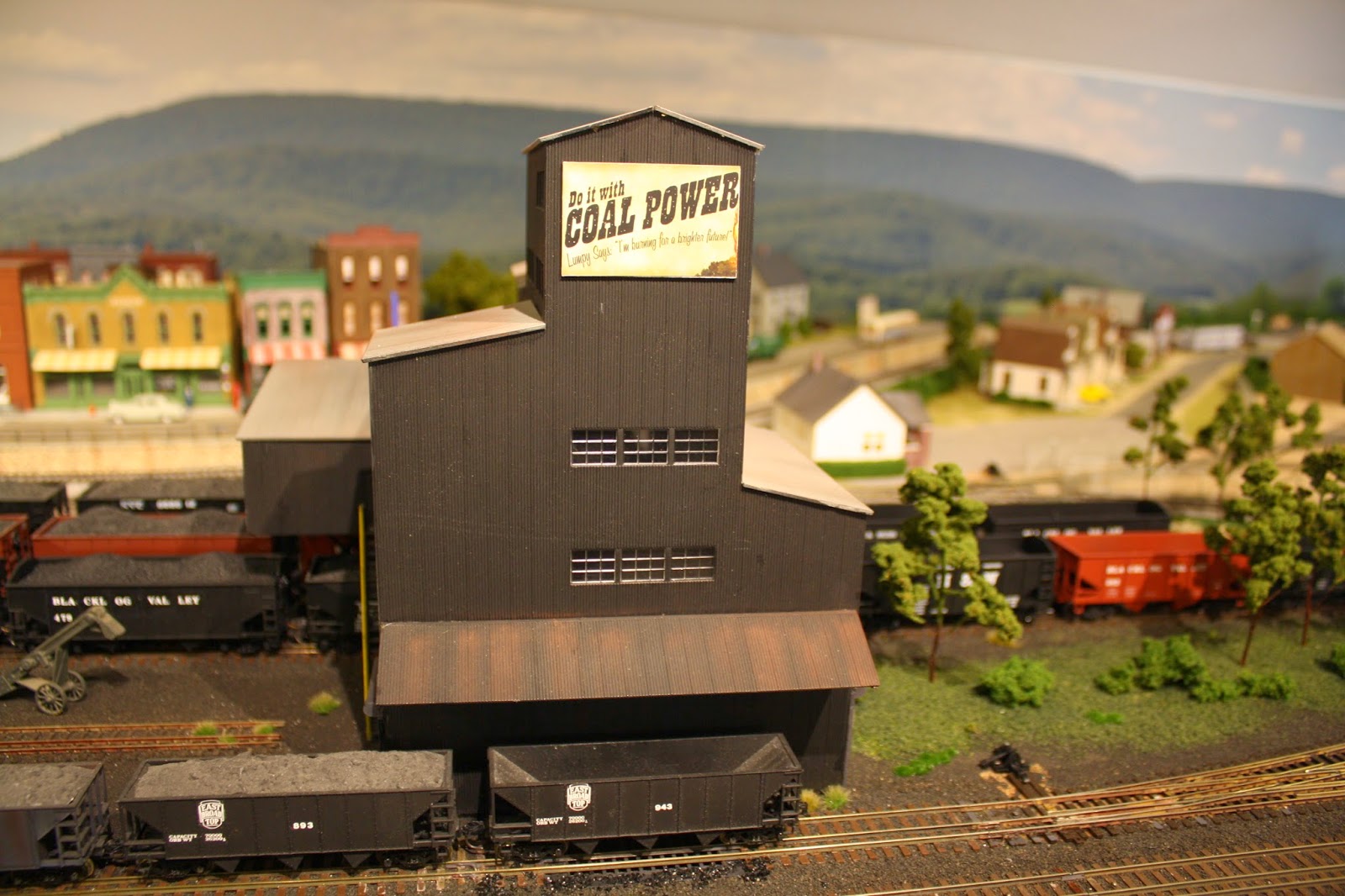 Beyond the yard lies the town of Blacklog, constructed on a sheet of 1 inch extruded foam insulation.  The town was designed to be removable, to allow access to the rear of the layout through a pop-up.  Most of the structures are DPM plastic models that have been super detailed and weathered.  Along the way, I managed to work in the names of my four grandchildren, including the Tucker automobile billboard atop the Blacklog Hotel, Colby's Cafe on the corner across from the depot, Tori Claire's barber shop and hair salon, and Clem's Bar and Grille.  The hardware store next to the cafe is named for my good friend and fellow narrow gauge modeler, Dave Trimble. 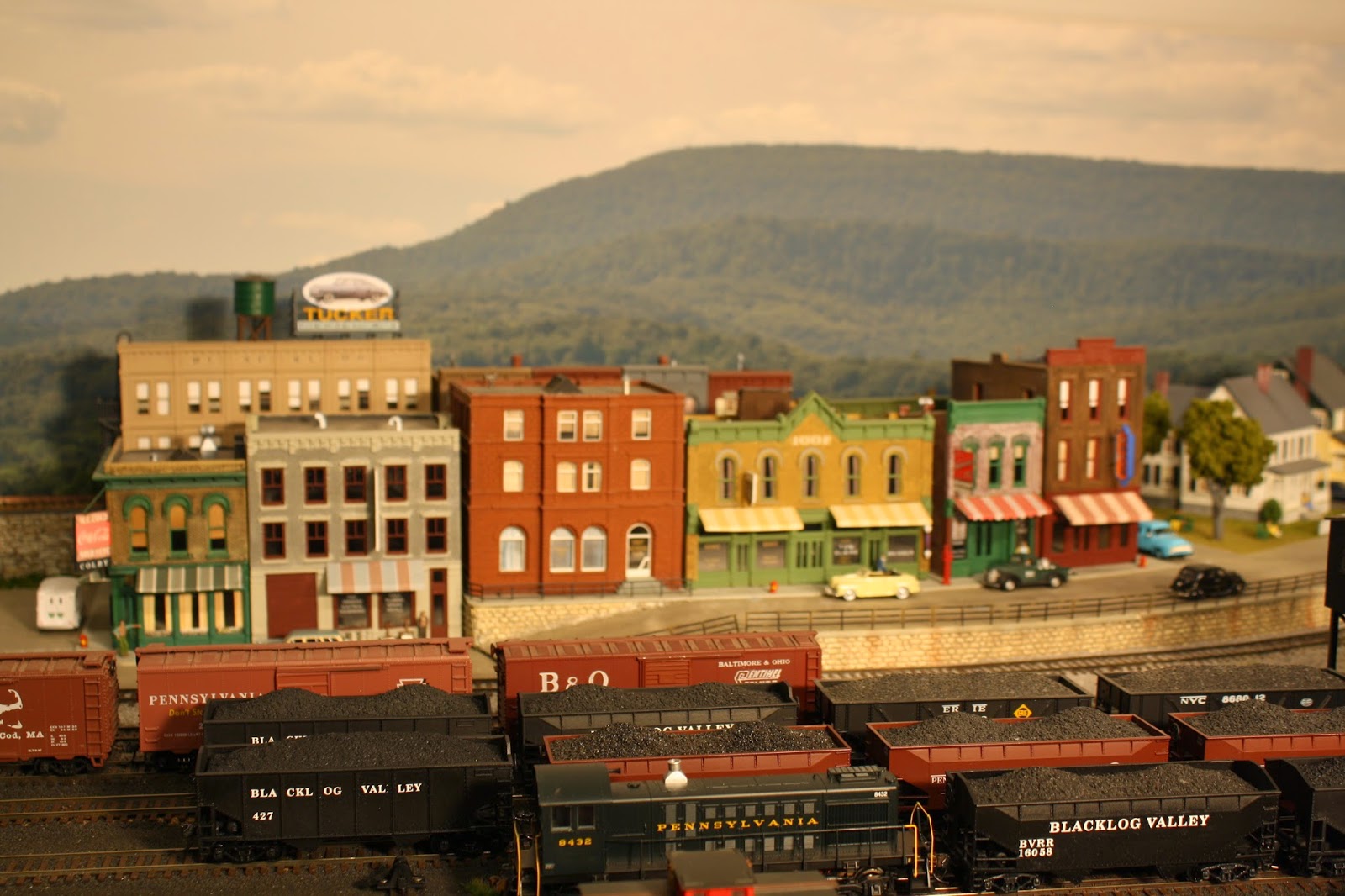 At the far right of town, past a small public park, is the residential side of town.  The street that runs along the tracks lies atop a 7 scale foot stone wall (from Chooch) with iron pipe railing.  The wall and railing have been heavily weathered with soot and rust. 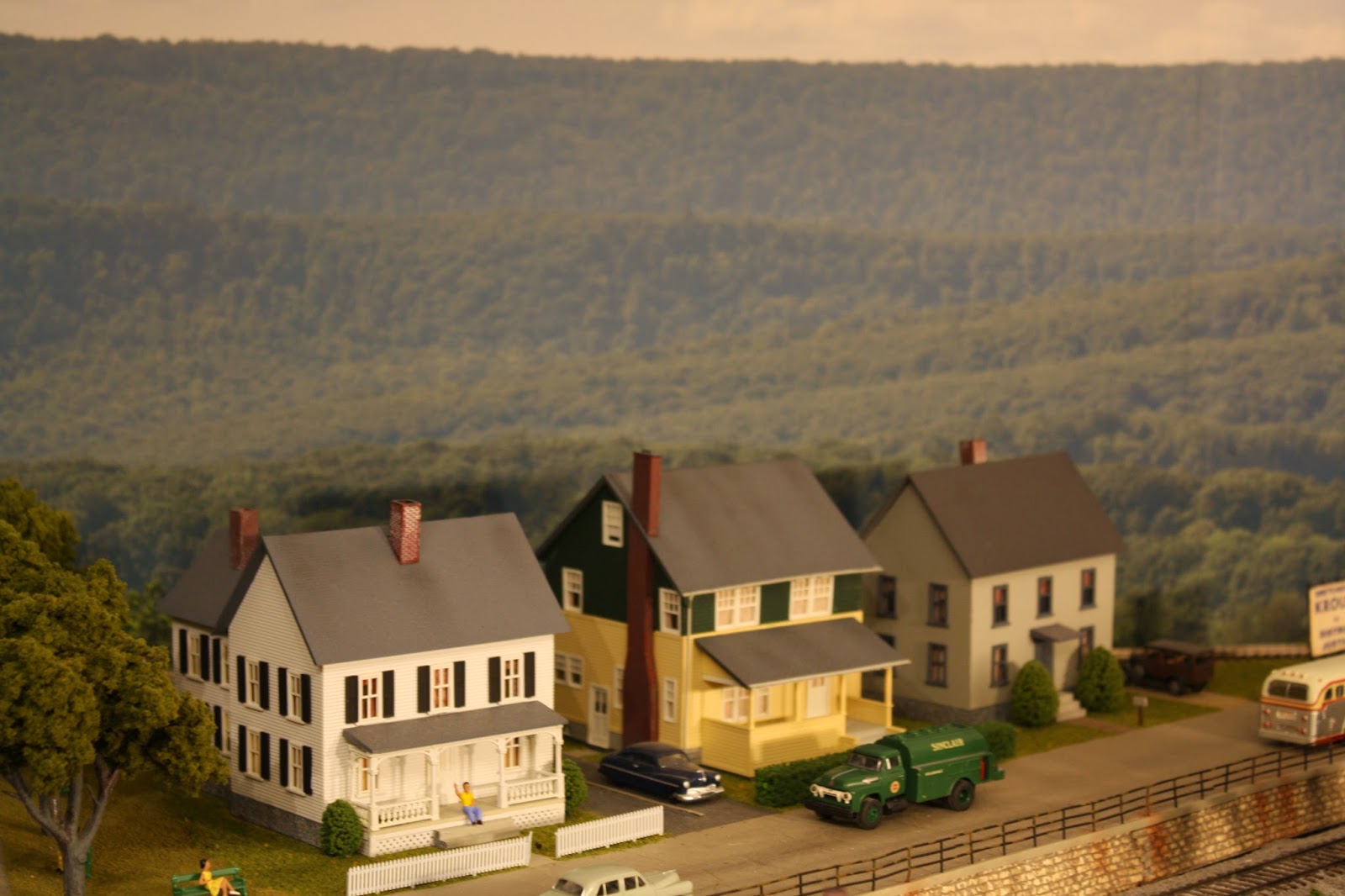 Below is a photo of the entire town module as it appeared before the scenic backdrop was added.

And here you can see some of the detail in the street and sidewalk.  The sidewalks were made of shirt cardboard painted with acrylics and scored with a hobby knife.  The streets were weathered with chalks, and cracks were added with a black ink pen.  The manhole covers were downloaded from the internet, sized, cut out and glued in place. 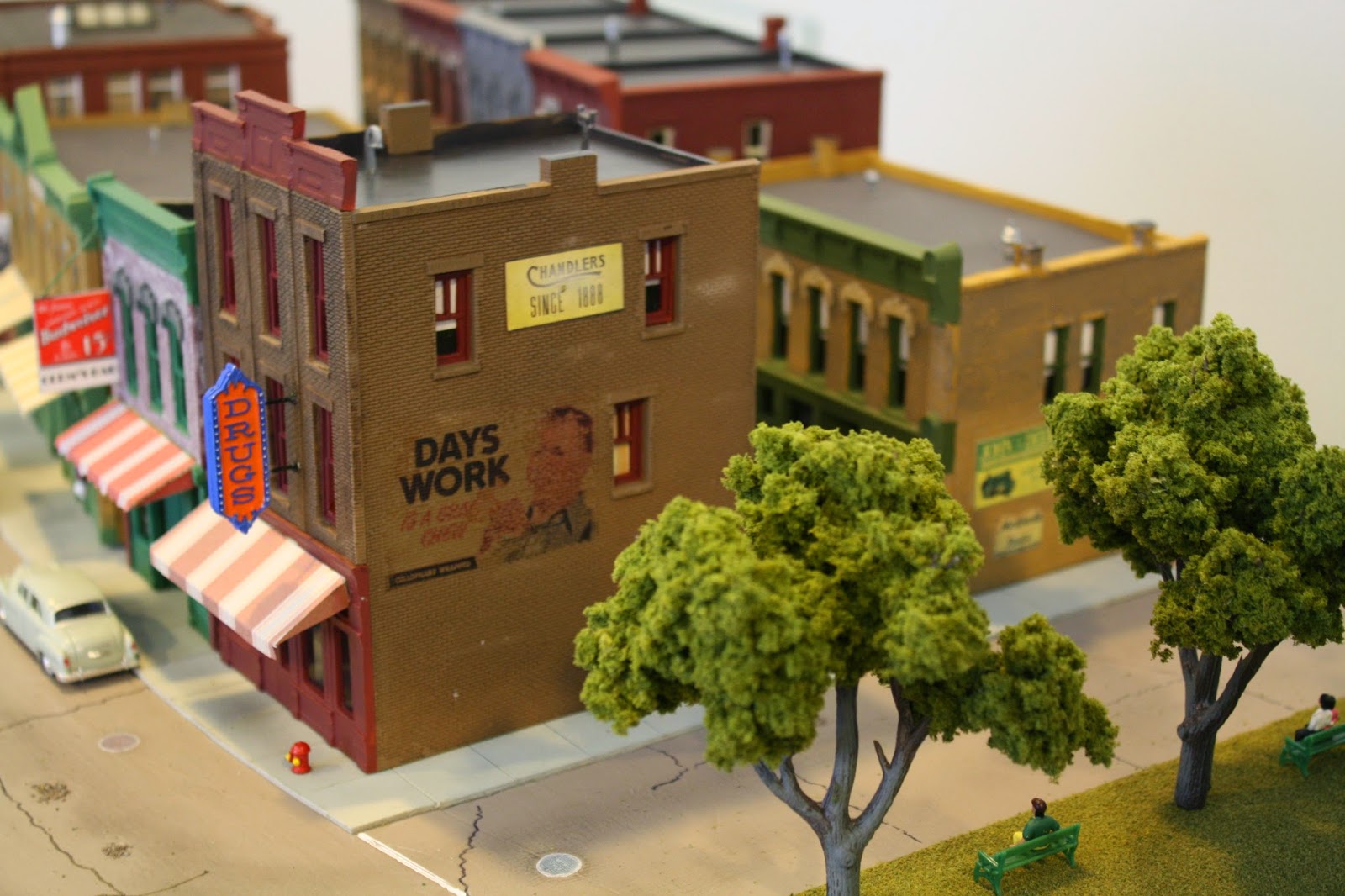 In addition to the town of Blacklog and its environs, the application for AP Scenery includes a smaller module containing the mining town of Robertsdale, which was at the opposite end of the EBT Railroad from Mount Union.  Robertsdale was a company town.  At the center were four stone block buildings owned by the railroad and coal company: the company store, depot, post office and the coal company offices.  Here the M-1 gas electric doodlebug arrives at the Robertsdale depot. 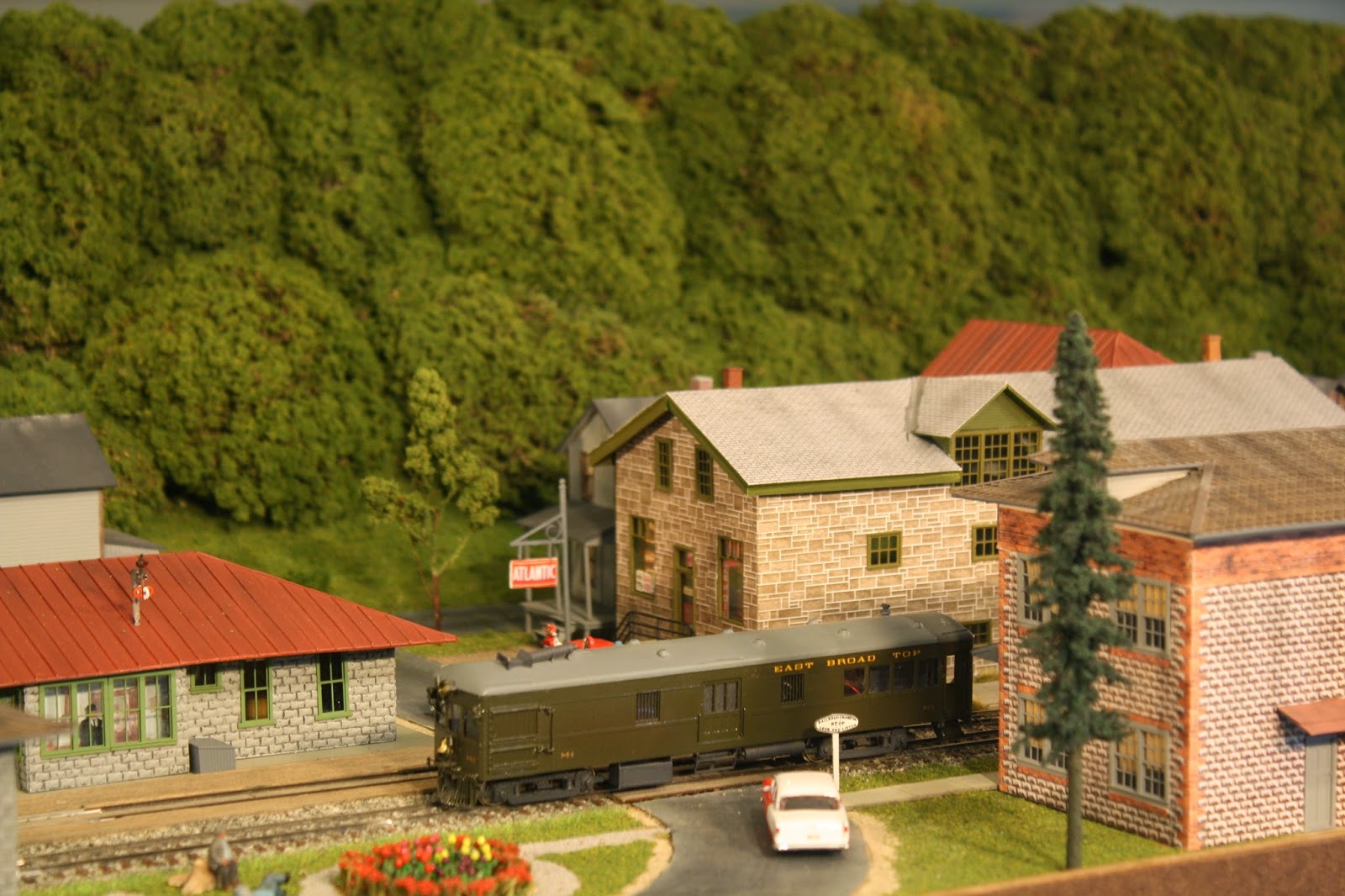 Robertsdale was built to house the miners and other personnel who worked the coal mines.  To the right of the company square one finds a line of small homes with neighbors spending a quiet Saturday watering the garden, cutting the grass, or just enjoying a cold one in the back yard. 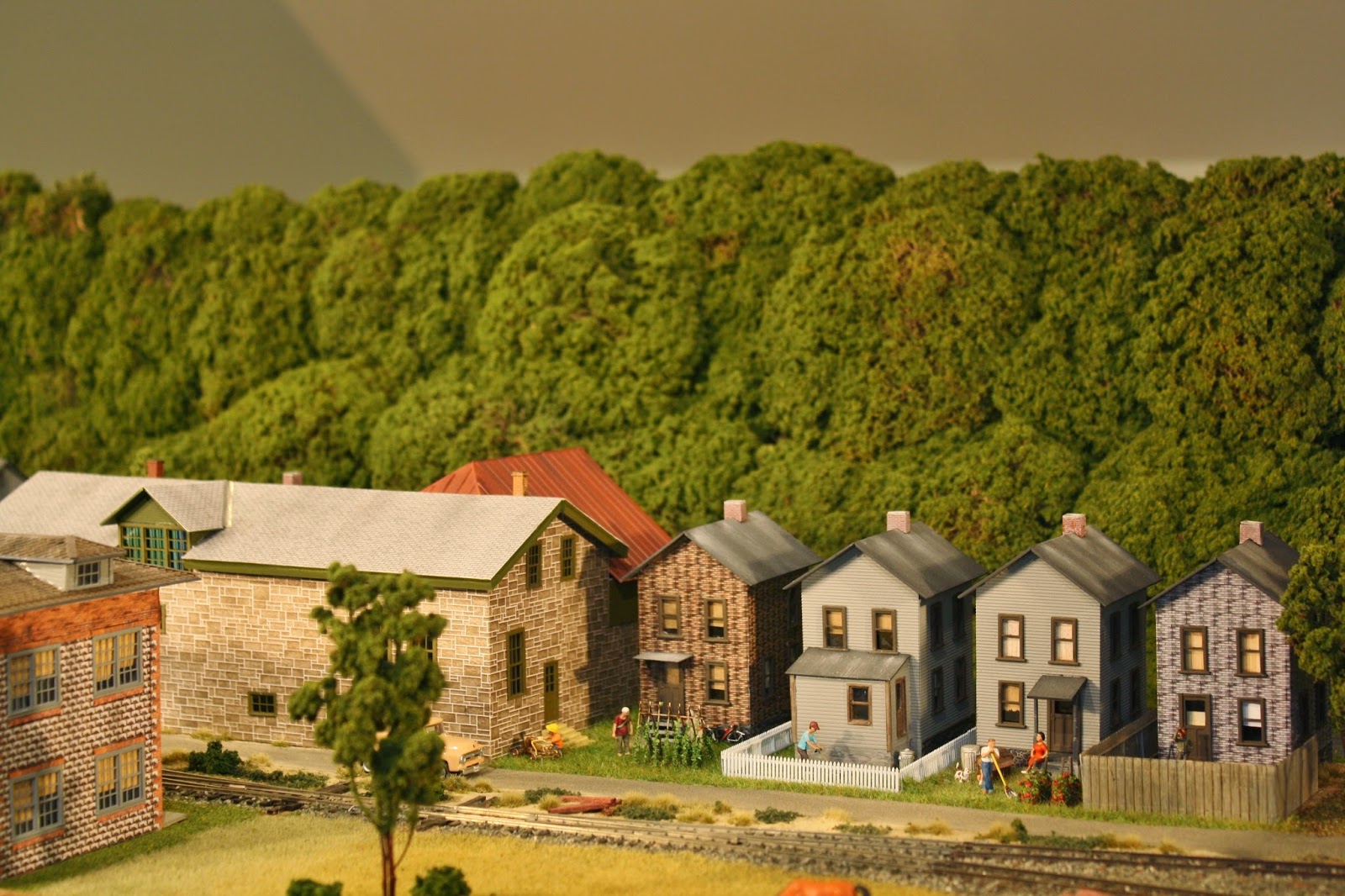 Across town, a group of youngsters enjoys a game of sandlot baseball.  Coal mining in rural Pennsylvania was a rough life, and the town folk didn't have a lot.  But the year is 1950.  In six years the last coal train will leave Robertsdale as the EBT shuts down for good.   Few if any of these young people will follow their parents and grandparents into the mines.  Today Robertsdale is just another sleepy mountain town. 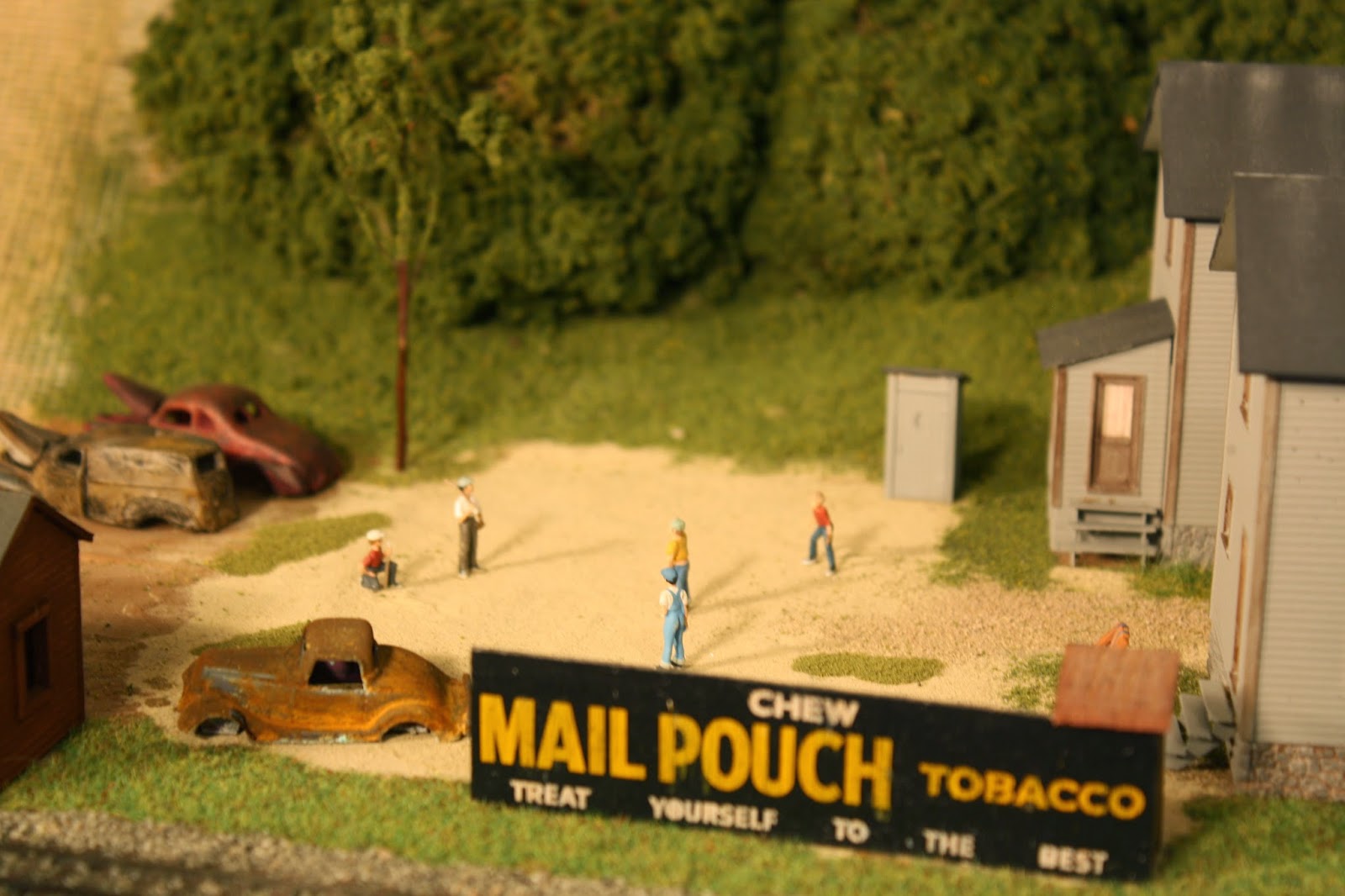 I hope you have enjoyed the pictures as much as I enjoyed creating these scenes on my Blacklog Valley model railroad.
Posted by Russ Norris, MMR at 8:30 PM No comments: