It has been two and a half years since my last installment on building the East Broad Top roundhouse from a kit designed by Michael Ribero.  In my previous post, I described how I built the roof. Up to this point, the work had been done on a separate table away from the layout, so I could have 360 degree access to the roundhouse.  Here is a photo of the roundhouse and turntable module in place on the layout. 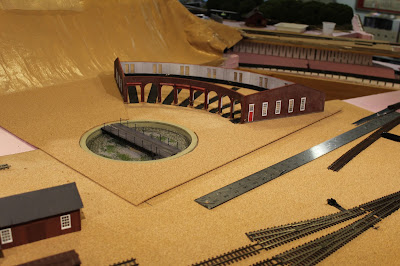 With the roundhouse walls in place, I laid out the tracks for each of the eight stalls. adjusting for the correct length from the turntable pit to the rear wall.  Since Mike Ribero's kit was slightly undersize, clearance for EBT locomotives and the M-1 gas electric, tolerances are critical.  The tracks had to be precisely in the center of each door, and even then the clearance was only about 1/16 of an inch on each side./ 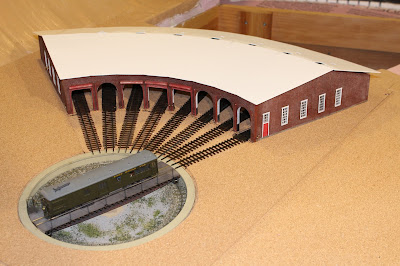 Once the tracks were laid out and pinned in place, I removed the roundhouse and turntable from the layout and returned it to the work bench.  With the tracks marked out correctly, I began work on the timber trusses located between each stall.  My plan was to install hanging lights from each truss with green shades similar to the prototype.  The lights would be tiny surface mounted LEDs (SMDs) suspended from copper strips providing power.  Here I am attaching the copper strips to the trusses with ACC. 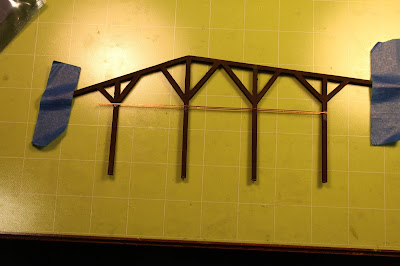 The SMDs were soldered to the copper strips in opposing directions, so that the DCC current will flow in one direction half the time and in the reverse direction the other half.  Since the DCC signal is faster than the eye can detect, each diode will appear to be lit all the time. 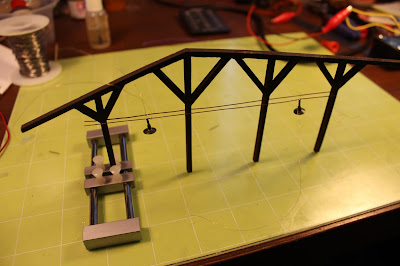 Here I have hooked up the truss lights to a DCC source, with a 1K ohm resistor in series..  You can see the lights reflecting on the work bench. 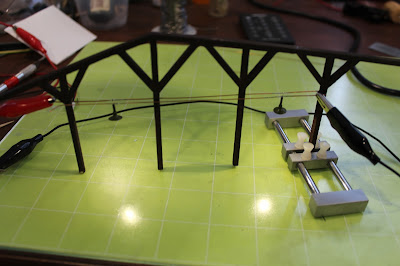 The work is quite delicate and requires a great deal of patience, but the results are worth the effort.  Here is a photo of all seven trusses test fit in the roundhouse with the lights attached. 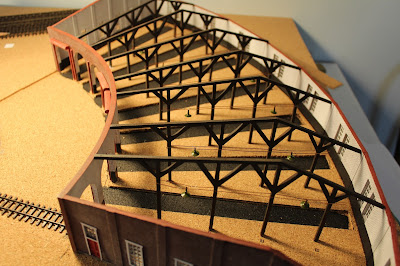 With the lighting and trusses in place, the next step in finishing the roundhouse was to install and ballast the tracks.  Here I worked with the HABS/HAER drawings to recreate as closely as possible the actual interior of the EBT roundhouse.  According to the engineering drawings, six of the eight stalls had 62 foot long inspection pits between the rails, which allowed shop workers to have access to the underside of the locomotives.  I decided that it would be too difficult for me to cut actual service pits into the cork and foam foundation, so I opted for a ruse.  The ties and cork under the tracks were painted grimy black, with the assumption that once the roundhouse was complete with the roof in place, the lighting would be so dim inside that a visitor to the layout would see only a dark place between the rails, giving the illusion of an engine pit.  Here the top layer of cork has been removed and the space painted black. 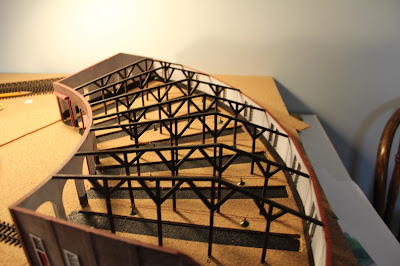 With preliminary work completed, the tracks were laid down and secured with adhesive latex caulk. Each of the trusses was located midway between tracks and cemented in place with ACC.  The wires from the SMDs (one passing through a resistor on each truss) were inserted in holes at the rear of each stall.  To further the illusion of the service pits, strips of .060" by .156" Evergreen styrene were run along the outside of the rails to suggest the walls of the service pit.  The.060" height of the strip was slightly less than the height of the code 70 rails.  For stall 8, which did not have a service pit, a strip of .060" by .250" stryrene was run down the center of the track as well.  A short length of .250" strip was placed at the entrance and another at the back wall, to suggest the front and back edges of the pit.  The strips were painted a gray color to suggest concrete. 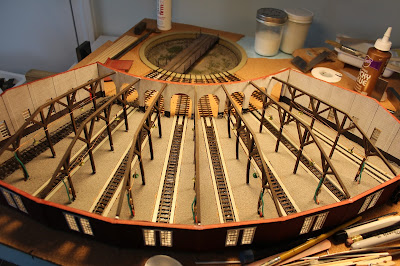 In the above picture, you can see the wiring for the SMD lights, the styrene strips to suggest the pit walls, and fine gray ballast that has been cemented to the floor with latex caulk.  This essentially finished the interior of the roundhouse.  Only a few details on the roof remained. 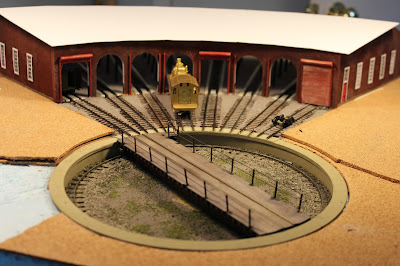 The roof of the prototype roundhouse was covered with rolled tar paper.  I used 3M Micropore paper medical tape, applied over the styrene sheet roof sections.   When painted with Tamiya NATO black, the roof presented a realistic, grimy appearance.  Here is the partially scenicked turntable and roundhouse with the roof monitors in place. 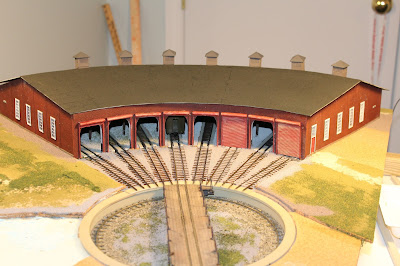 The last detail was the addition of the smoke jacks located behind the roof monitors, directly over the stacks of the locomotives when they were inside the roundhouse.  Quarter inch square tubing was the perfect size for the metal stacks, but I was stumped as to how to keep them upright at the correct angle to the roof, and how to make the pyramid shaped caps for them. 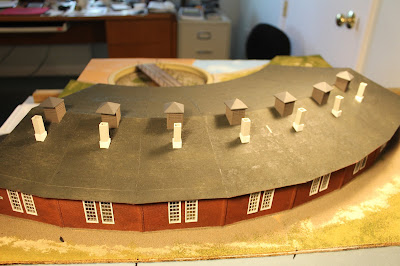 I solved the problem of support for the smoke jacks by sliding the square tubes into a slightly larger size piece of tubing, with one end cut at the same angle as the roof.  When the jacks are inserted in the roof, these "collars" provide the support to keep them vertical at the correct angle.  For the smoke jack caps, I made resin castings, taking one of the monitor chimneys and making a series of impressions in a block of modeling clay.  I poured the resin into the molds and waited two days.  The castings are miniature versions of the monitor roofs. 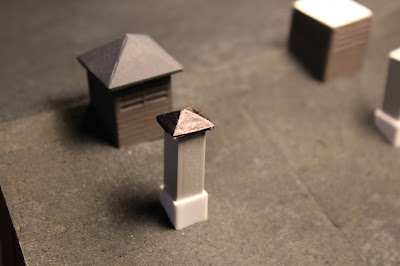 Here is a photo of six caps curing in a block of clay.  The finished product is on the left. 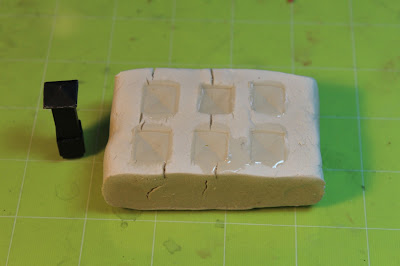 All that remains is to move the roundhouse back to the layout, where it will be a centerpiece of my East Broad Top Railroad shop complex.
Posted by Russ Norris, MMR at 2:10 PM No comments: