How I Spent My Summer Vacation

If you have been following this blog over the last year or so, you may have noticed a lack of activity in recent months.  To be frank, the blog has fallen into a black hole for the summer.   I had been happily chugging along, updating the progress in recreating the little mining town of Robertsdale at the southern end of the East Broad Top narrow gauge railroad.  Work came to a halt, however, when I was forced to deal with several unexpected crises that had nothing to do with the Robertsdale project.

The first crisis involved the dual gauge wye at the far end of the yard at Blacklog.  I did not build this wye.  I bought it on eBay a number of years ago.  Undoubtedly a piece of someone's former HOn3 layout, the wye was hand crafted with the rails and frogs secured to wooden ties with spikes.  I have tinkered with it continuously, trying to fix a host of problems with gauge, level, and just plain cranky mechanics.  The worst of the problems seemed to center on the wye switch and tail track, which caused my Hallmark EBT mikado to derail constantly.  Here you can see the wye in the foreground with Blacklog Refractories (BREFCO) in the distance. 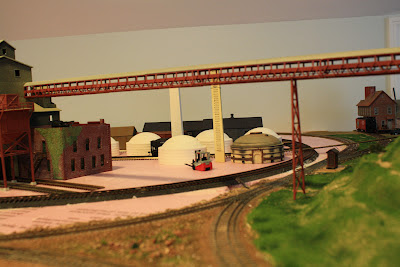 A closeup of the wye reveals the complex trackwork. 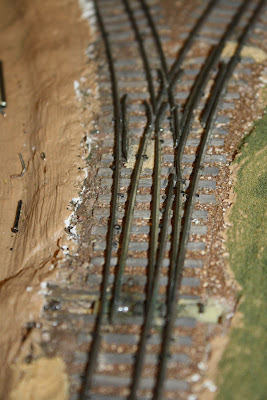 Careful measurements with HOn3 track gauges revealed several spots right around the switch frog where the rails were too tight, causing the drivers to lift up and off the track.  That part was easily resolved by adjusting the rails, moving the spikes and bringing the track into gauge.  The other part of the problem involved the moving part of the switch: the point rails.   The points had small squares of sheet brass soldered to them.  Holes were bored in these brass squares, with small screws to secure the points to the throw bar.  The frog ends of the point rails were held in place by tiny spikes, which over time tended to loosen, allowing the rails to shift.  Result: More derailments.

I decided to take the bull by the horns, remove the point rails, and replace the throw bar with a PC tie to which the points would be soldered.  I secured the rails on either side of the new throw bar by soldering them to a pair of PC ties.  The brass squares at the tip of the points were unsoldered and reattached to the blunt end of the point rail, the frog end.  Track nails were driven through the brass squares into the plywood base, allowing the rails to pivot when the switch is thrown.  Here you can see how I did it. 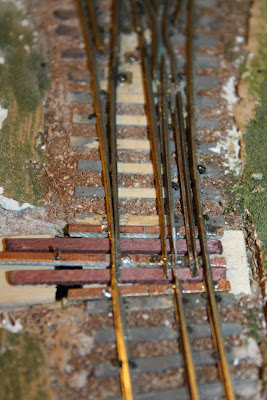 At the top of the photo you can see the small brass squares attached to the point rails, with the track nails holding them in place, but allowing them to swivel when the switch is thrown.  There wasn't enough room to use the same technique on the standard gauge point rail, so it was secured to the frog rail with an insulating track joiner.  I sanded the wood ties down where the points pass over them to reduce drag.  Between the three PC ties are two wooden ties, primarily for appearances.  The new switch needs to be painted and ballasted, but mechanically, the mechanism works perfectly.  A locomotive can run through the switch over and over again without derailing.

The second crisis involved the only operating steam engine on the layout: EBT No. 14, equipped with a Tsunami decoder with sound and lights.  Ever since the engine became operational, I had noticed a problem with the valve gear.  No. 14 was purchased from Baldwin with slide valve gear, replaced on later engines with Southern piston valve gear.  On the model, the valve gear rods have small pincers or clamps at the end of the rod, which is designed to clamp over a rivet.  The radius rod, which runs from the rocker assembly to the valve spindle crosshead, attaches to the combination lever in this way.

Unfortunately, the rod is made of very thin, stamped nickle silver, and had a tendency to slip off the pin to which it attaches.  This happened repeatedly, but the situation came to ahead when the rod detached while the engine was running at speed, dropped and dug into the ballast, bending the rod.  To make matters worse, the combination lever had broken off the valve crosshead, and while I was endeavoring to snap it back in place, the union link broke as well.  The union link connects to the other end of the combination lever, which attaches by a similar clamp and connects to the driving rod crosshead.

The upshot was that the valve gear on the fireman's side of the locomotive was broken beyond repair.  Here is a photo of the broken pieces.  The long piece on the left is the combination lever.  The pin just below the broken head is where the radius rod would have been attached.  The union link at the bottom connects to the driver crosshead. 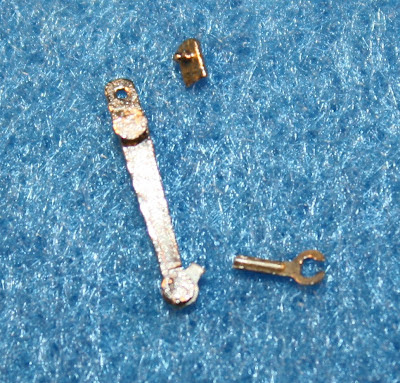 At first I thought of trying to cannibalize components from the valve gear of one of my old scrap steam engines -- all HO gauge, unfortunately.  When I salvaged some similar parts. they were far too large to use as replacements.  It looked as if old No. 14 was headed for permanent stationary display.  That's when the light bulb went off in my head.  I belong to at least three different on-line groups, two focused on HOn3 in general and one specifically on the East Broad Top.  I put out an SOS on all three lists: Is there anyone who can help?

I have said it before on this blog, and I will say it again.  Model railroaders are a wonderful group of folks, most of whom will go out of their way to help a fellow modeler in trouble.  Within hours I received the first offer of help ... all the way from the United Kingdom!  Other offers followed.  One was from a modeler in Ohio who does photo etching.  He offered to make drawings of the parts and have replacement parts etched out of sheet nickle silver.   I would receive a sheet something like this: 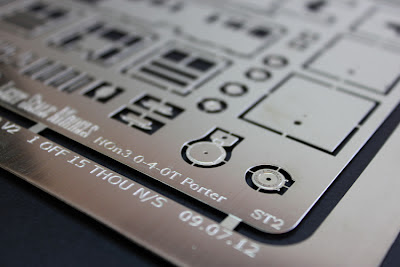 I accepted this kind offer, and the parts are now in production -- they should be ready in a week or two.  Then, of course, I will have the challenge of assembling them with tiny rivets and putting everything back together.  But at least there is a light at the end of the tunnel.

With no operating steam engine on the layout, I decided to start a new project.  I have three of the EBT's heavy 2-8-2 mikados, unpainted and still in the original boxes.  They were waiting for the "right time" to install decoders and paint them.  While I wasn't ready to do that much work right now, I decided to pull one out an install a  simple non-sound decoder so I would have something to pull that long string of new Blackstone hopper cars!

Installation of the decoder  -- a Digitrax DZ125 designed to fit Z, N and HOn3 locomotives -- was relatively simple.  The tender had plenty of room in the tank for the small sized decoder.  I ran wires under the tender floor using shrink tubing to hold them tightly against the center sill. 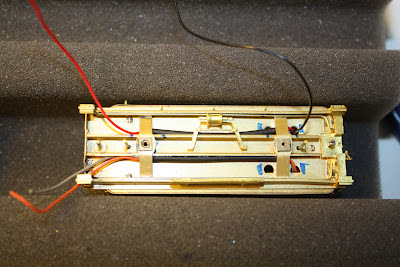 I drilled holes in the end beam, and ran the wires through them to the can motor: 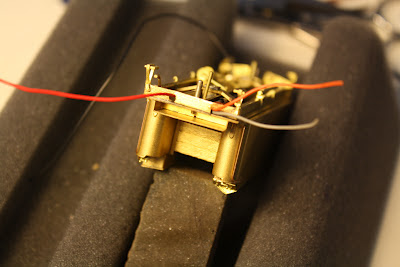 Once everything was hooked up correctly, I placed EBT No. 18 -- an 82 ton behemoth -- on the layout, and tried running it around the layout.  At first, it ran quite smoothly, especially when one considers that it had been sitting in a box for years!  But then it hit the dual gauge wye (remember that?) and stopped dead.  The power district circuit breaker began flashing, and little zaps sparked under the engine cab.  A cursory check found that the engine's trailing truck wheels were touching the brass engine frame on tight curves, with disastrous effect!

Looking for a quick fix that would get No. 18 up and running, I turned it over and checked the trailing truck.  Suddenly I noticed something green on the inside of the engine frame.  I had seen that stuff before.  It was a trace of Liquid Tape -- liquid insulation.  Apparently, the former owner of #18 had struggled with the same problem.

A quick trip to Radio Shack and I had a bottle of black Liquid Tape.  I removed the trailing truck and using a toothpick, carefully applied three or four layers of insulation, allowing time for each layer to dry thoroughly.  Here is a view of the underside of the engine with the Liquid Tape. 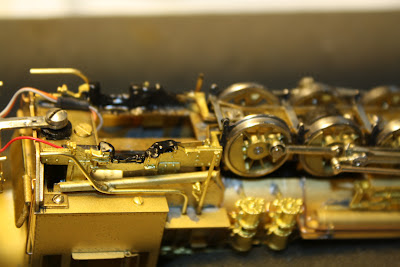 I was careful to keep most of the liquid insulation on the inside of the frame, so that almost nothing is visible from the outside.  By using black insulation, any visible trace of the Liquid Tape will be invisible when I paint the locomotive black. 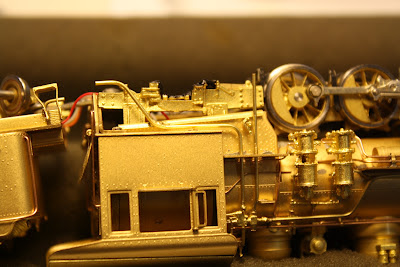 The liquid insulation did the trick!  Repeated circuits of the layout revealed no hesitation or shorting due to the trailing truck.  I was so delighted with the project that I have already begun installing an identical decoder in No. 17, which should soon be operational.  Here is a view of No. 18 hauling a long line of Blackstone EBT hopper cars from the mines south of Robertsdale. 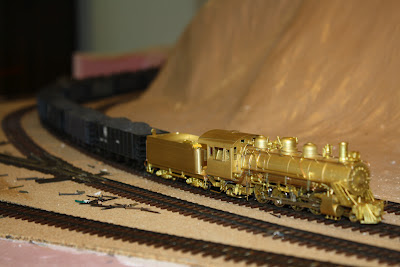 So with two problems resolved and the third in process, maybe I can finally get back to work on some of my long-term projects, like finishing up the town of Robertsdale.  And while I'm working on that, I can enjoy the sight of a heavy mike hauling strings of hoppers full of coal down the mountain.  Is this a great hobby or what!
Posted by Russ Norris, MMR at 8:50 PM No comments: