The current phase of layout construction involves recreating the East Broad Top shops, turntable and roundhouse.  Some of these structures were available in kit form, most of them from White Ground. Unfortunately, the White Ground company has been out of business for many years, although it is occasionally possible to pick up a kit on eBay.  Other than these few kits, the rest of the shop buildings had to be scratch built.  At this point, most of the shops have been modeled are are now on the layout.

One of the structures still missing from my railroad is the track scale and scale house at Orbisonia. The EBT had several scales, allowing them to track any losses in shipping coal from the mines at Robertsdale to the coal cleaning plant at Mount Union.  The scale at Robertsdale was housed in the Robertsdale station, where it still resides.  A detailed account of modeling the station can be found in a previous post. 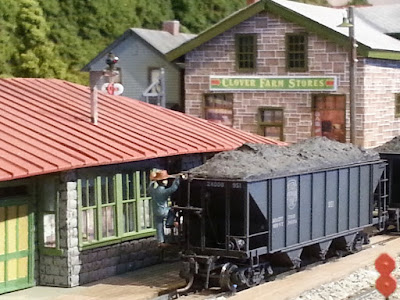 The EBT also had track scales at the mines, Orbisonia and at Mount Union, where the coal was dumped, washed, sorted, and transferred to Pennsylvania Railroad hoppers for shipment.  I knew that a track scale was located at Orbisonia on one of the tracks leading to the car shop.  That track also had a underground coal dump and elevator to transfer coal from a loaded hopper car to the coal bin, where it was used to fire the boilers that powered the entire shop complex.  The scale was used to weigh the coal used, and also to weigh cars built or repaired in the car shop.

When I started this project, I had no idea what the scale house looked like.  I had never seen a photo of it, although its approximate location is indicated on the FEBT map of the shops.  Since I was not aware of an extant picture, I felt free to construct a "typical" scale house.  I also found a Builders in Scale kit for a small board and batten scale house that looked like it might fit in the available space, and decided to construct and install it on the layout. 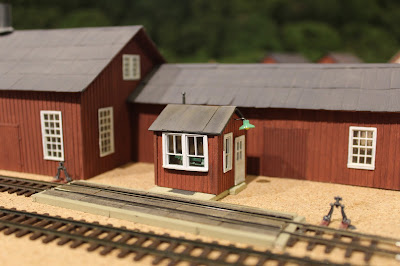 The kit also included material for constructing the scale itself, but I opted to use a plank grade crossing kit from C. C. Laser.  The crossing was installed over code 70 ME flex track.   Because of the tight space available on my layout, the scale had to be constructed on a slight curve, so I used a curved grade crossing kit. The radius of curvature did not exactly match the laser cut timbers, so I cut the curved crossing at the end of each set of planks, and adjusted the curve to match the track.  Eighth inch square strip wood was used to make the concrete foundation for the scale, which was bent to match the curve of the flex track and then painted with Floquil aged concrete.  I liked the little house, but something felt wrong.  It just didn't seem to fit the shabby buildings around it, and it seemed a  little too "nice" for a structure that was probably used very infrequently.

Then I struck gold!  Leafing through my copy of Deane Mellander's Slim Gauge Survivor I found a photo of the actual scale house as it appeared toward the end of the railroad's life as a common carrier.  It also depicted the track work for the scale, which was accessed by stub switches at either end.  You can see from the following photo that the real scale house bears very little resemblance to the one from Builders in Scale.  For one thing, the prototype was heavily worn and weathered, not like my cute little house.  It had a simple slant roof from front to back, and an odd set of four windows facing the scale, with a single window on the side.. 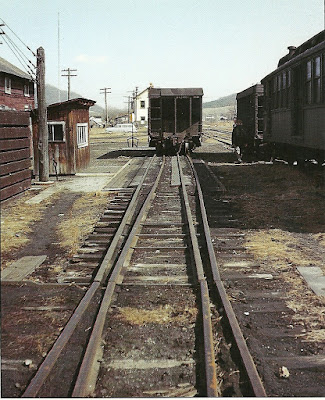 With a picture of the prototype in hand, I immediately made the decision to move my newly built scale house to the coal plant in Blacklog, which is my free lanced version of Mount Union.  I had a coal cleaning plant, but no scale to weigh incoming loads of coal.  The new house seemed to fit perfectly on track leading to the coal dump.  Here it is simply set in place without any scale track. Still looks pretty good! 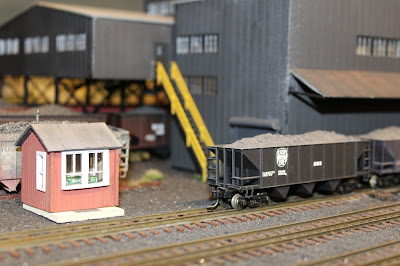 So now I had a photo to work from in building an accurate scale model of the prototype scale house. But the picture shows only the south and east sides of the structure, and the general outline of the building.  I suspected that the north side had a door, and the back was probably just a blank wall.  But without dimensions, I would have to guesstimate the exact size of this unique little building.

Then another EBT modeler reminded me that the winter 2015 issue of the Timber Transfer, published by the Friends of the East Broad Top, contained an article by Ron Pearson that included a sketch of the EBT scale house at Wood, a few miles south of Robertsdale, complete with dimensions. The Wood scale house looked a lot like the one at Orbisonia.  It made sense that the railroad might use a common design for both structures, so I decided to scratch build the scale house based on the dimensions of the one at Wood.  That meant that the front of the building facing the tracks would be 8' wide by 8' tall.  The rear wall, blank as I suspected, was 8' wide by 7' high.  The house had a slant roof made of corrugated iron painted black, as was typical for the EBT shops.

I still had to figure out the windows.  Rummaging through my box of spare windows and doors, I found a pair of sprues with 4 over 4 windows about 6 feet high.  I occured to me that if I removed the vertical window muntins and turned the window on its side, I would have a four pane window that looked exactly like the prototype.  (I also had to sand down the window sill so that both ends match.) A simple one pane window would make do for the side, and I tried cutting down an 8 foot door to 6 foot for the north side entrance.  I cut the sides from 1/8" board and batten basswood and weathered the wood with a mixture of alcohol and India ink.  Once the sides were dry, I lightly brushed them with Minwax classic gray penetrating stain, not covering the sides entirely, to allow some of the ink darkened wood to show through.  Finally, I used an artist's sponge brush to randomly apply Floquil oxide red over the stains, making the tops of the walls a little darker where they would be protected by the roof, and the lower parts lighter or unpainted where weathering would have washed away the paint and darkened the wood.  Here is a photo of the walls on my workbench before assembly. 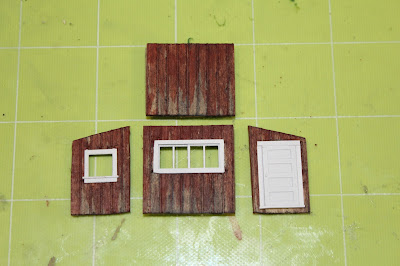 I used 1/16" stripwood for bracing on the back sides of the pieces, and assembled it with white glue. The scale was beginning to resemble the one in the photo.  But I still wasn't happy with the door on the north side.  It was just too wide.  And most of my other doors were Colorado types, which didn't seem to match the dilapidated appearance of the Orbisonia scale house.  Finally, I decided to scrap the nicely painted door, and use scribed basswood planking to make a beat-up wooden door, which I felt was more prototypical.  Here is the door side of the finished structure. 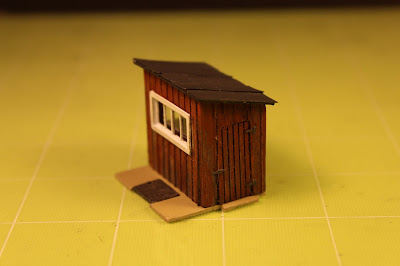 And in the following photo are the south and east sides as depicted in the prototype photo. 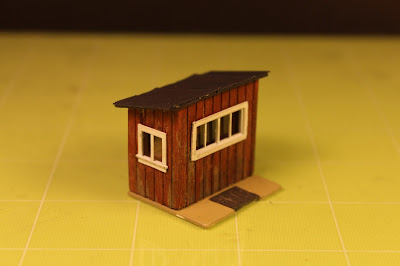 I cut a styrene base for the concrete foundation, using an access door to the scale mechanism from the Builders in Scale kit.  The foundation was painted aged concrete and the trap door grimy black.  The roof and sides were then brushed with grimy black, dirty brown and rusty brown weathering powders. Even though the track is not yet ballasted, the little scale house seems to fit perfectly with the EBT shop scene. 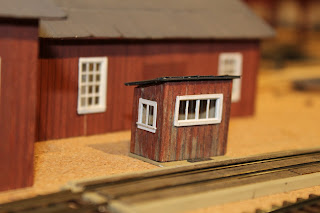 I will finish by extending the scale rails either side of the scale, and adding harp switch stands to suggest stub switches.  The ground will be covered with actual cinders and boney taken from the EBT yards. 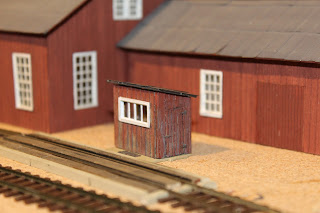