In previous posts, I have detailed how I constructed the pit and bridge for a 65 foot steel girder turntable from Kitwood Hill Models.  This HOn3 turntable (with minor differences) is a replica of the turntables in Durango, Colorado and Rockhill Furnace, Pennsylvania.  My model was detailed for the EBT turntable as part of the turntable and roundhouse module that will be integrated into my layout.

Once the pit was finished, it was time to paint the concrete sides, ballast the circular support rail, and add loose gravel and weeds at the bottom of the pit.  Care was taken not to interfere with the turning of the bridge, so a small area around the center of the pit was left a light brown color to suggest dirt. In the following photo, I am using a mix of Modge Podge and water, with a drop of detergent, to glue the scenery to the turntable floor. 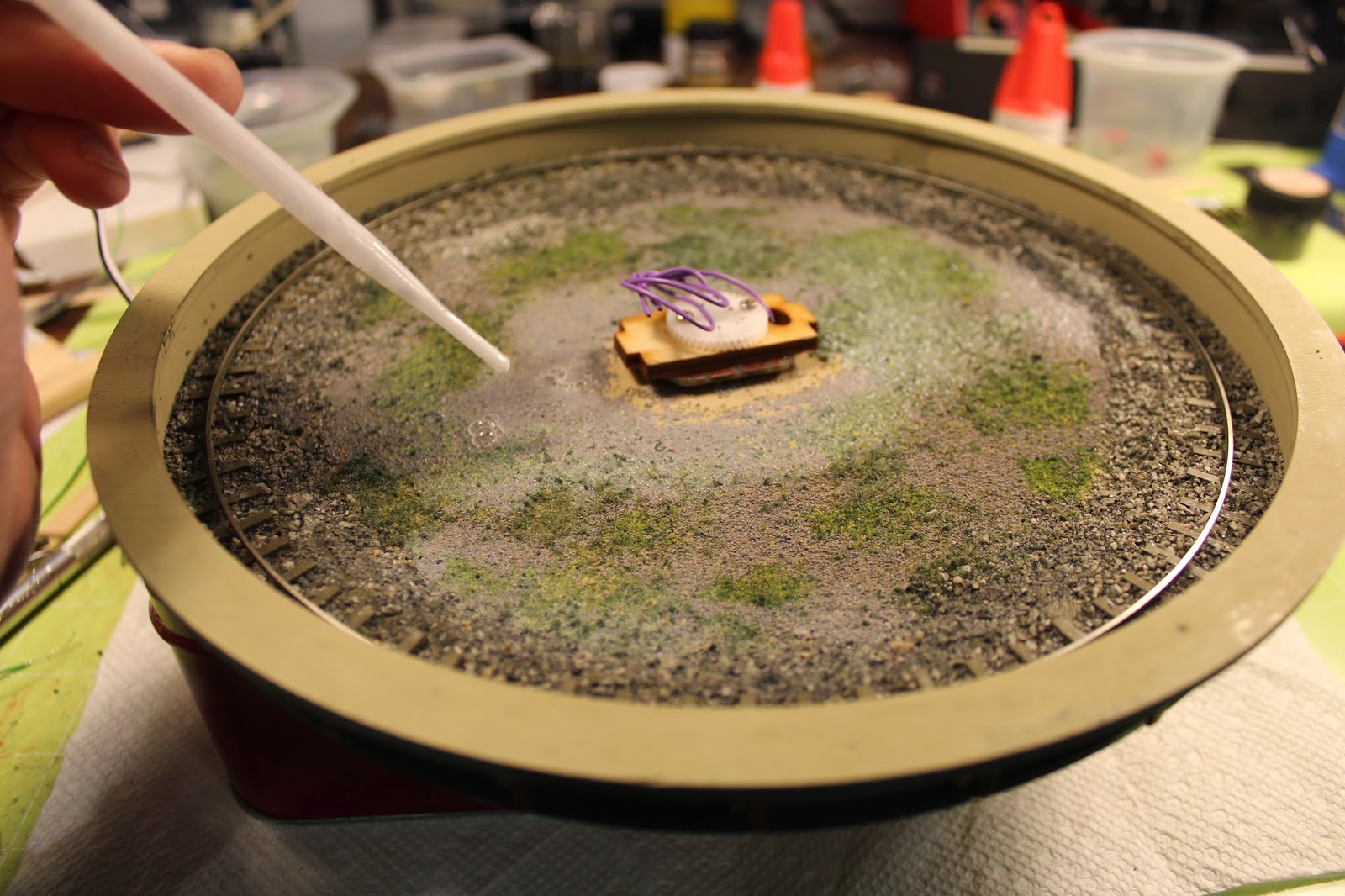 You can see the turning plate that will support the bridge in the center of the pit.  The wires coming from the plate, which fits neatly into the bottom of the bridge, provide power to the rails.  Here is a view of the finished scenery.  Honestly, this is pretty much like the bottom of the prototype pit. 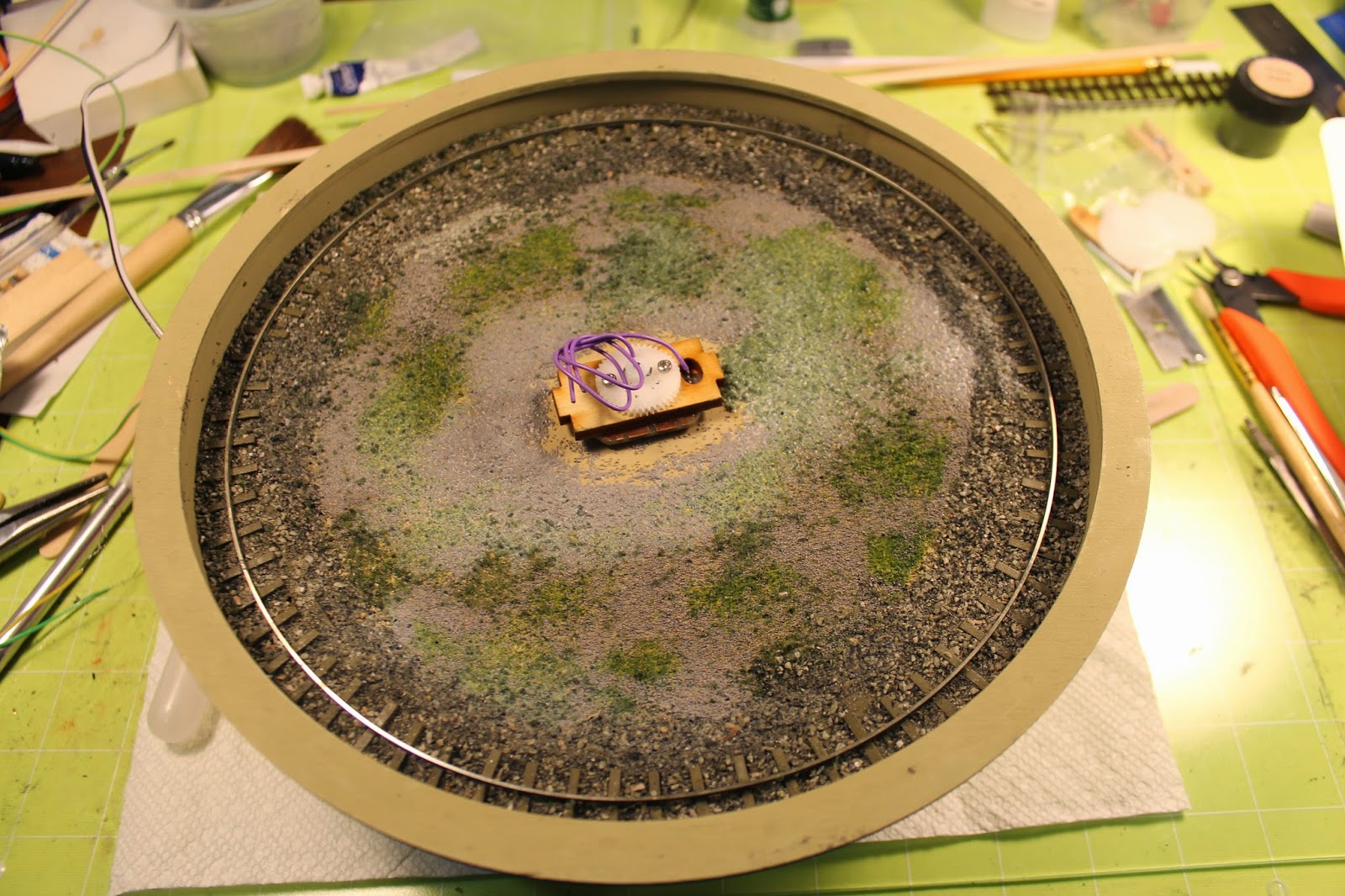 I have not super detailed the pit wall, which in the prototype is stained with soot, dirt, ashes, and rust from the rails.  Eventually, detailing will be added, once I have fixed the turntable into place with the approach and roundhouse tracks.

After test fitting the bridge in place, and sanding a little from the planking where it was rubbing against the pit wall, I was ready to connect power to the bridge rails.  The wires that were included in the kit (the purple wires emerging from the turning plate) were rather stiff, so that when the bridge was set on the plate, it tended to pop off the plate instead of riding smoothly on the support wheels. The instructions also said to hard wire the bridge in place, but I wanted to be able to remove it for servicing when necessary.  So I picked up a two pin micro connector from the model airplane department at my local hobby store and soldered one side to the purple wires after cutting them as short as possible.  I used flexible computer ribbon wire soldered to the bridge tracks, and ran the wires to the other micro connector. 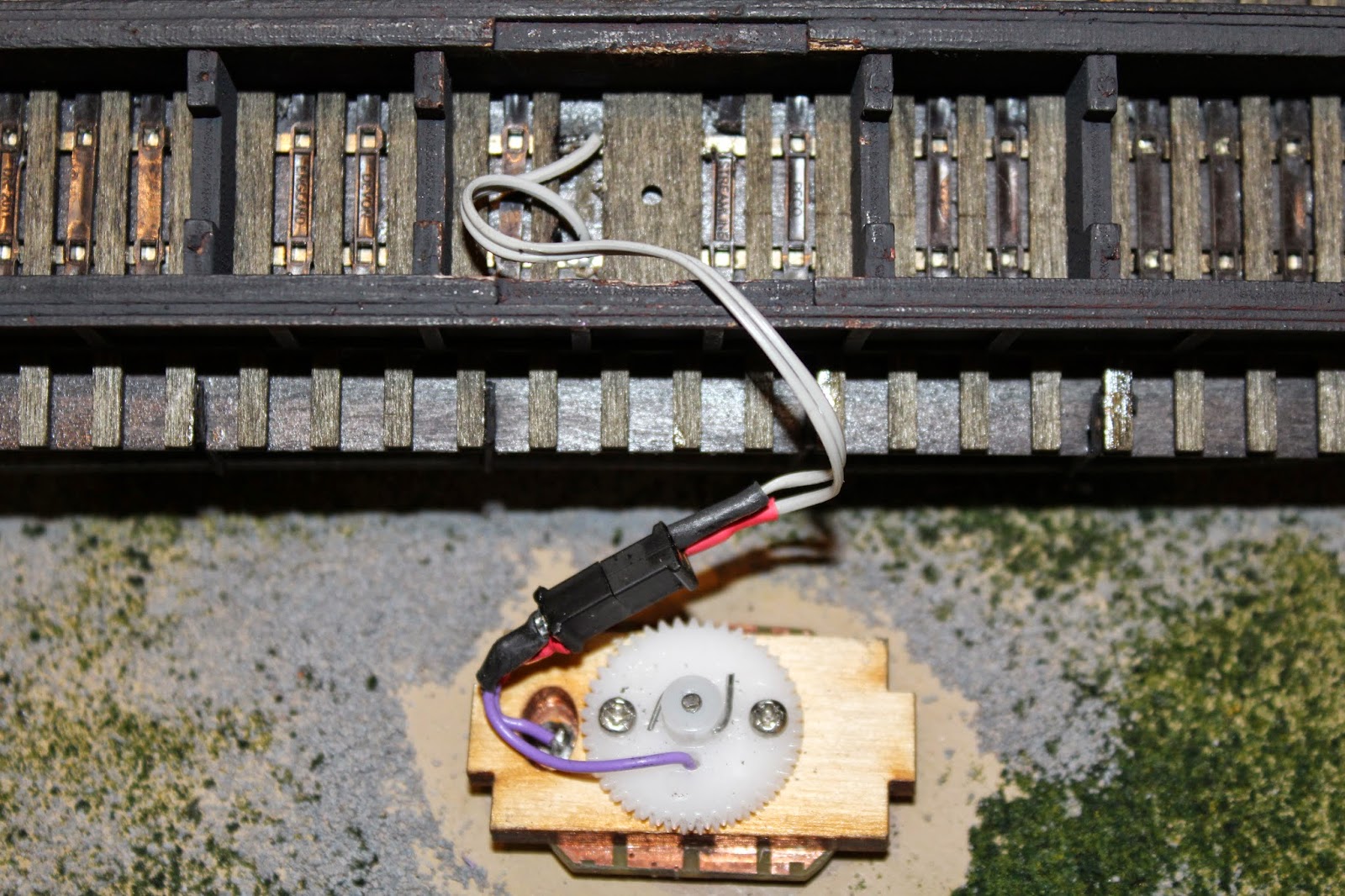 The micro connectors sat on the plastic gear.  Careful measurement indicated that the connector would just clear the bottom of the bridge deck.  Unfortunately, when I tried to reassemble the bridge, I couldn't get the bridge firmly down on the plate.  Even a micro connector was too big!  So I ended up having to solder two #30 wires directly from the plate to the bridge track.  I can still lift off the bridge for minor repairs, but anything more requires unsoldering the power leads and moving the bridge to the workbench.It took several tries to get everything folded up neatly.  The final test was to rotate the bridge 360 degrees under its own power.  I placed EBT Mikado #16 on the table for a more realistic test. 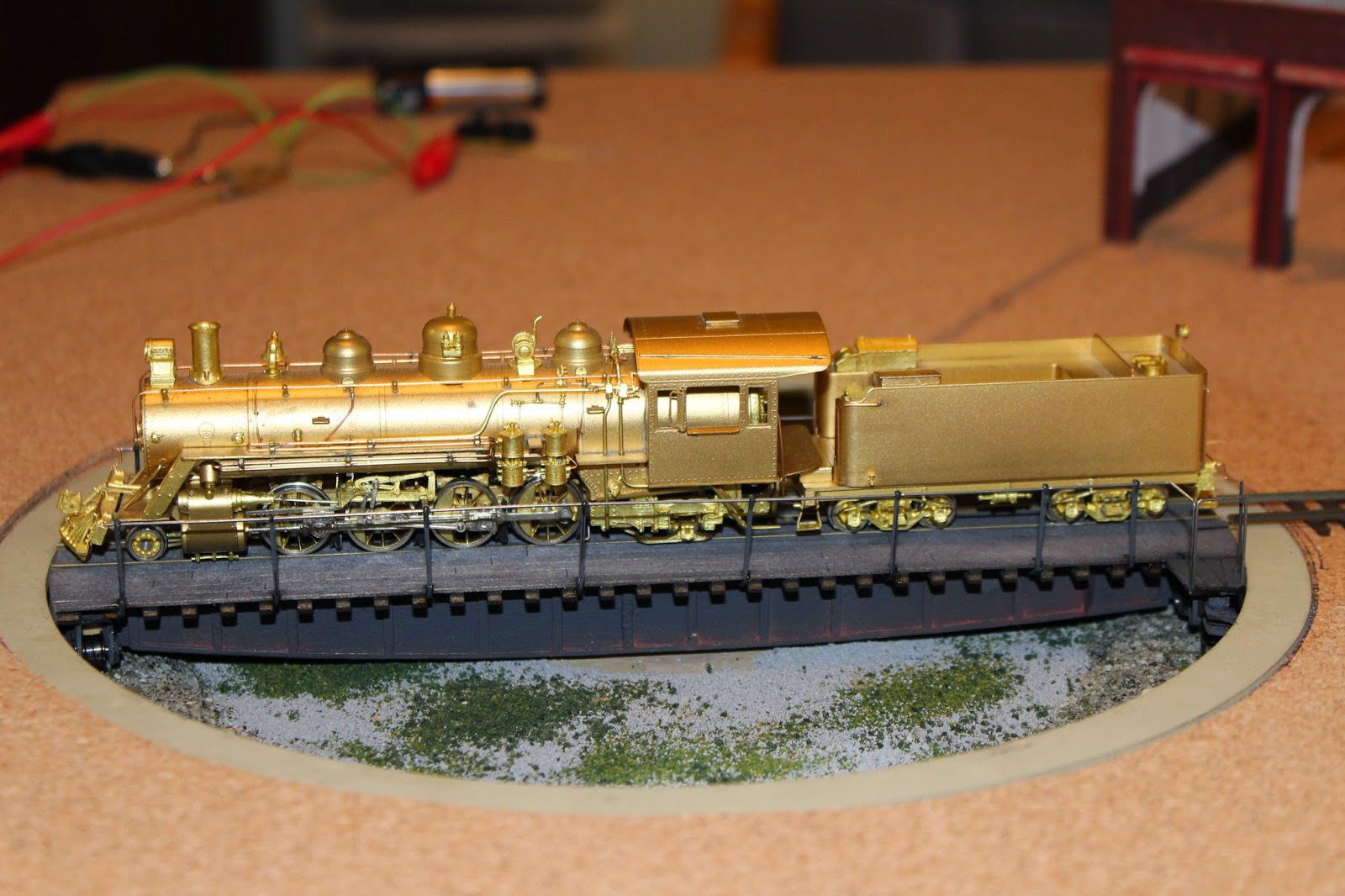 The tiny motor that turns the bridge through a series of gears requires only 1.5 volts to operate prototypically, but it is very powerful.  The instructions call for a single AA battery, but you can safely use two if you want it to turn faster.  I found that lining up the rails was easier if the bridge turned more slowly. 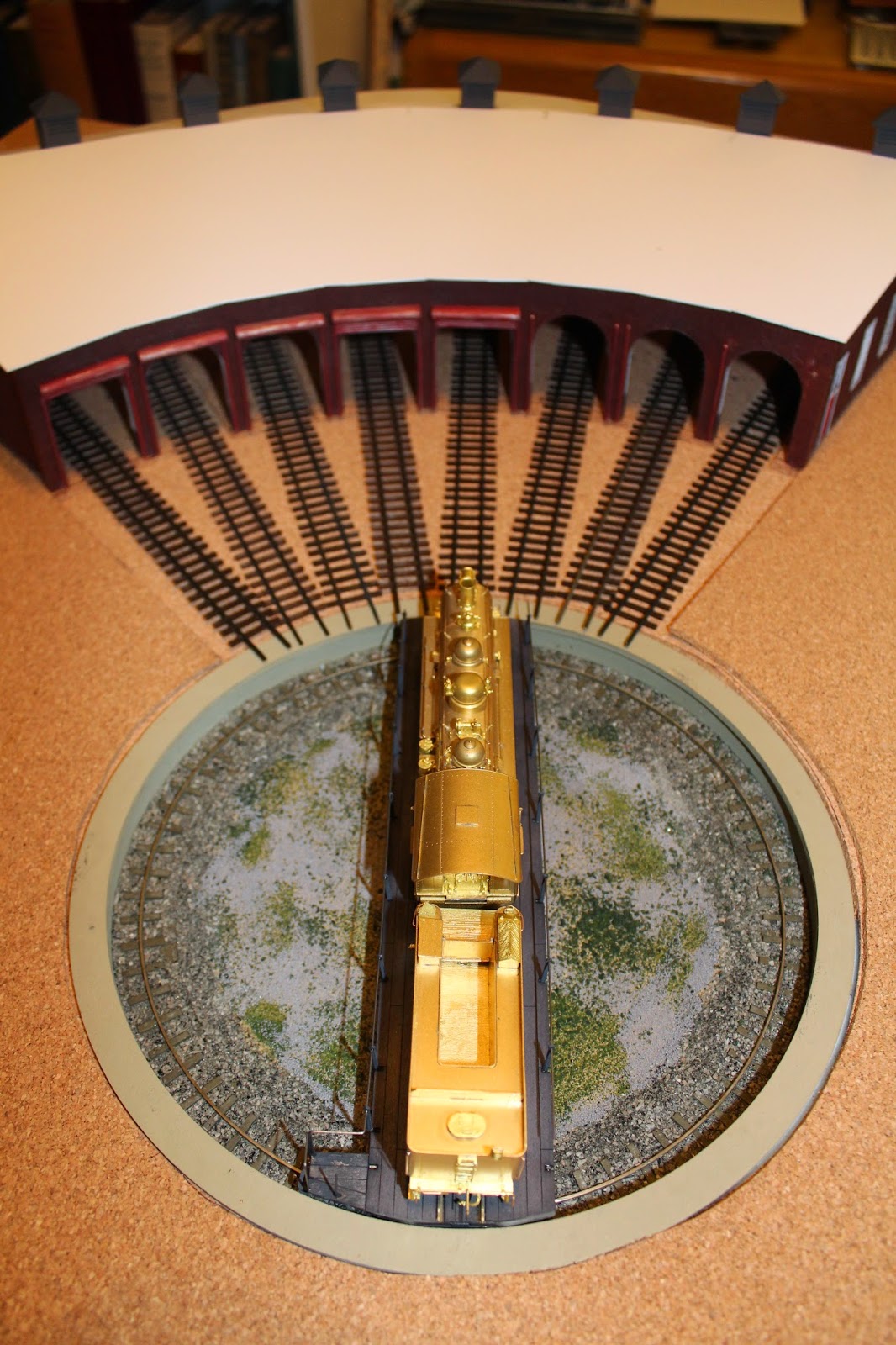 Clearly, there is still a lot of work to be done to finish the module.  The roundhouse tracks have to be powered, lighting must be installed, the roof remains a work in progress, and the entire module must be scenicked prior to placement on the layout.  The tracks between the turntable and the roundhouse are ballasted with gray stone  in the prototype, while the interior floor of the roundhouse is covered with gravel.  Around the outside of the turntable there will be gravel, grass, weeds and of course, the two lead tracks will be ballasted.  The main lead (directly behind the tender in the above photo) also passes over the ash pit, and that will be modeled as well. 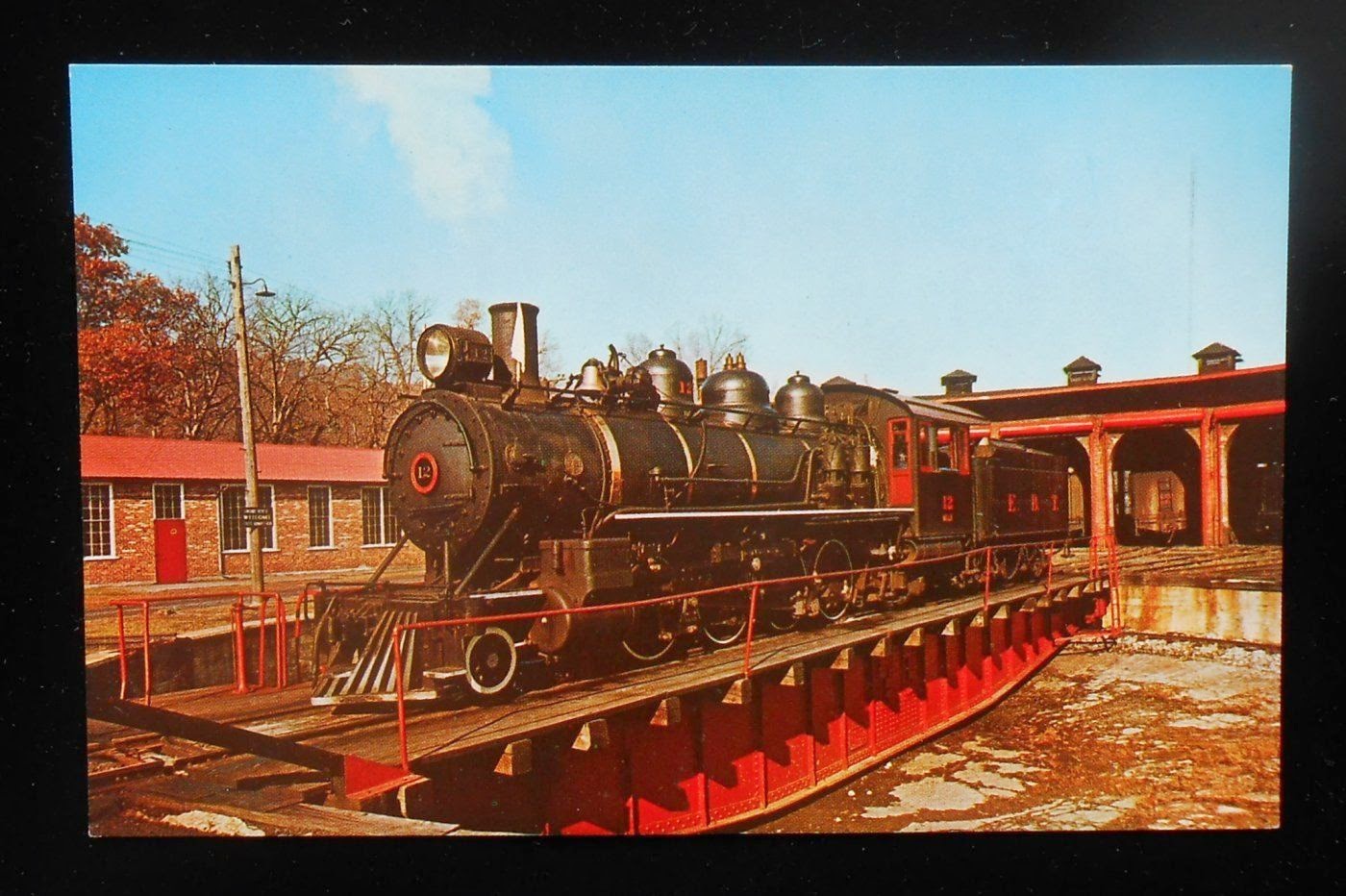 In the next installment of this series, I will return to work on the roundhouse.  But even in its unfinished form, I am excited by how this project is developing.  I hope you will continue to follow the work in future posts.
Posted by Russ Norris, MMR at 1:38 PM 1 comment: