The East Broad Top Railroad began narrow gauge operations in 1875.  The railroad was built to haul coal from semi-bituminous veins on the east side of Broad Top Mountain to Mount Union, where the black diamonds were transferred to the standard gauge hopper cars of the Pennsylvania Railroad.  But from the beginning the railroad also carried both freight and passengers, as well as the U.S. mail, over its 30-mile long mainline.

Passenger service had its ups and downs over the years, but by 1930 the Depression, strikes, and falling coal production led to decreased travel on the EBT.  In January 1928 a bus line began running between Mount Union and McConnellsburg, paralleling much of the railroad.  Other bus services were opened, and it was clear that before long one or more of these buses would expand into direct competition with the EBT.

To block highway competitors, the railroad organized its own bus subsidiary in the summer of 1929, with a route between Huntingdon, Pennslvania and Hagerstown, Maryland, via Mount Union, Orbisonia and McConnellsburg.  A two ton truck was also placed in freight service between Huntingdon and McConnellsburg.  The East Broad Top Transit Company purchased and operated a series of buses and trucks over the next ten years, until abandoning the service in the early 1940s.  Here is a photo of bus #1 in an early color scheme of red and white. 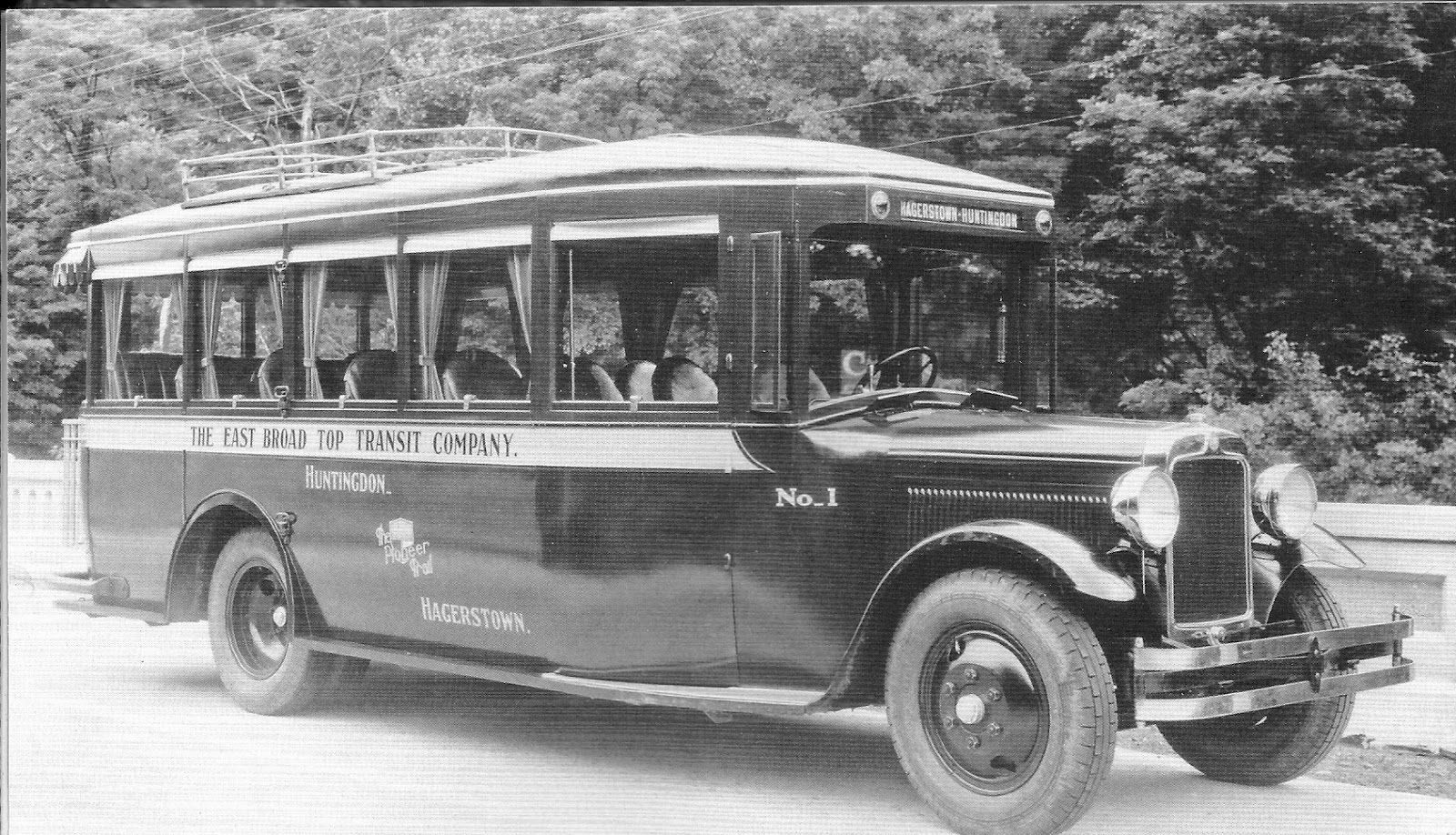 This is a photo of EBT Transit Company #10, a 1930 model 2 1/2 ton GM truck purchased to replace an earlier vehicle destroyed when the original bus garage in Orbisonia burned in 1933. 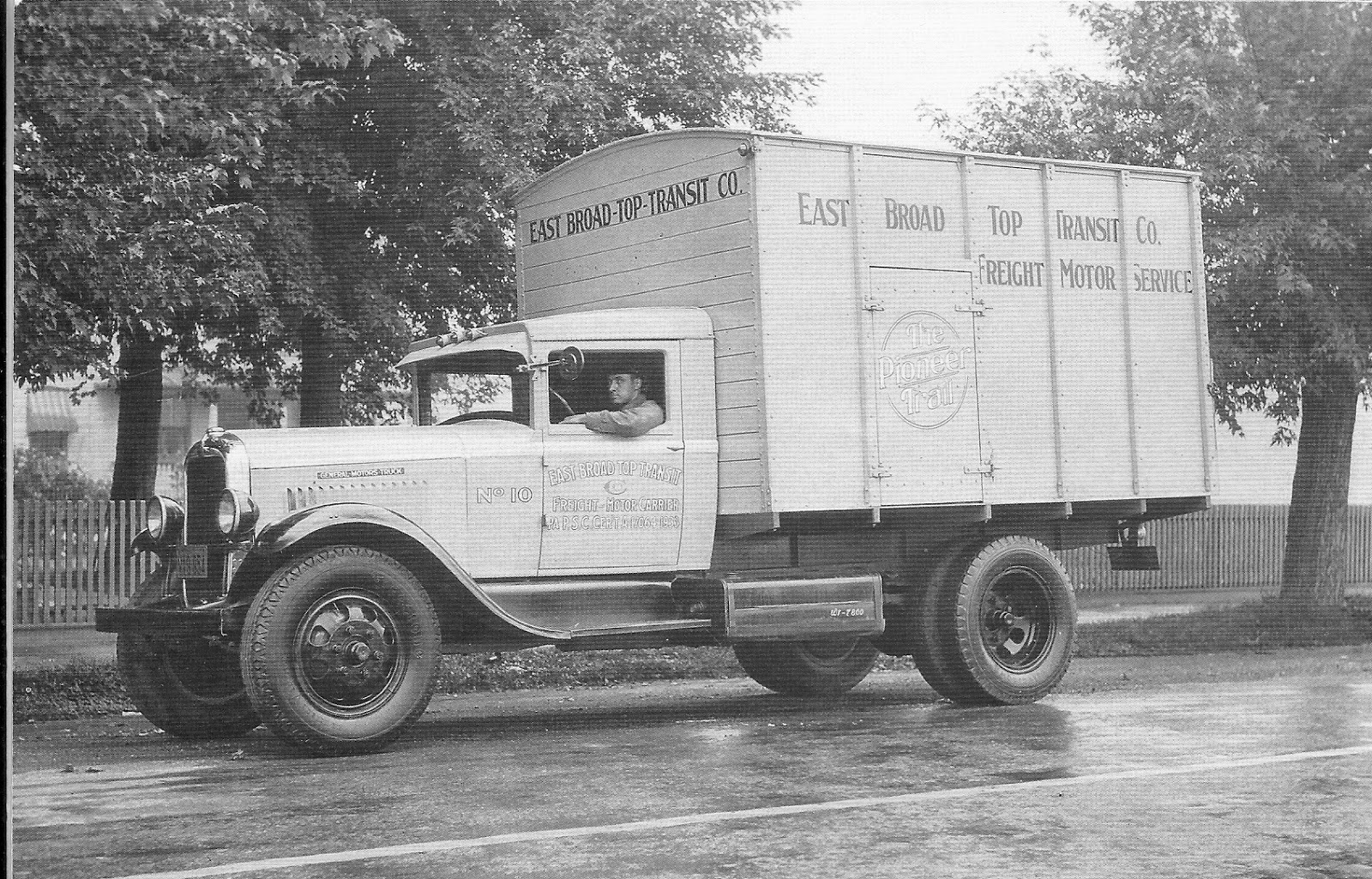 I hadn't given much thought to the EBT's bus and truck service until a recent article by John Corson in the summer 2013 issue of the Timber Transfer, the official journal of the Friends of the East Broad Top.  John grew up in Mount Union, and can still recall going as a child with his grandfather, L. K. Chilcote, to the Orbisonia roundhouse and getting on the buses, where he would pretend to be a driver.  John's father was the EBT terminal agent at the time, and so John frequently rode the EBT buses.  His interest in the EBT transit system has persisted over the years, and he has restored a replica of EBTTC bus #9, a GM "U" model with a Buick overhead-valve, six cylinder engine. 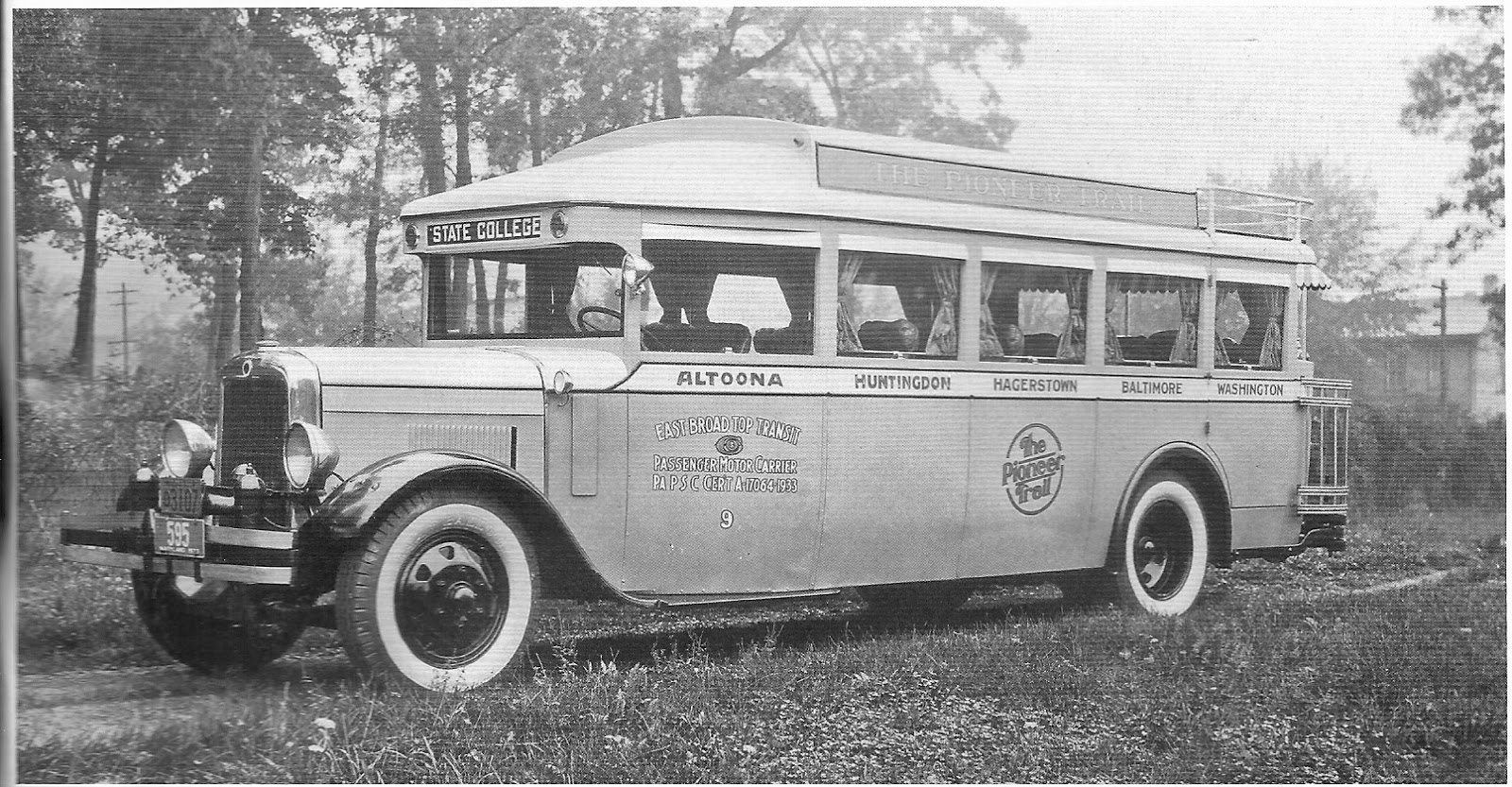 The Timber Transfer article triggered my creative juices, and I began to wonder if it would be possible to include models of the EBT buses and trucks on my HOn3 railroad.  My version of the EBT is set in the year 1950, and the transit company was abandoned in the early 1940s; however, following Model Railroad Rule #1 (It's my railroad and I'll do it my way) I decided that on my version of the EBT the railroad had continued to operate limited truck and bus service at least up until 1950.

I began to shop around for trucks that might be modified to resemble the EBT vehicles.  The EBTTC bought and ran GM products exclusively, and I wasn't able to find a GM truck model that was available and reasonably priced.  But I did find several box trucks that were "close enough", including a Mini Metals 1942-1946 Chevy delivery truck and a Golden Wheels van of the same vintage.

Working from photos in the Corson article, I created appropriate lettering and reduced the size using Microsoft Word.  The Word file was then printed on Testor's decal paper from my local hobby store.  After the decals dried overnight, I sprayed the sheet with Testor's Decal Bonder Spray and again let the sheet of decals dry overnight.  Decals were then cut out carefully, dipped in water for a few seconds, and set in place.  Once the decals were dry, I applied a few drops of Micro Set solution to help them settle.  The "Pioneer Trail" decal found on all EBT trucks and buses was copied and reduced from a drawing in the article.  A seated figure was placed in the driver's seat after painting and prior to reassembly. Here is a photo of an EBTTC delivery truck crossing the tracks in Robertsdale. 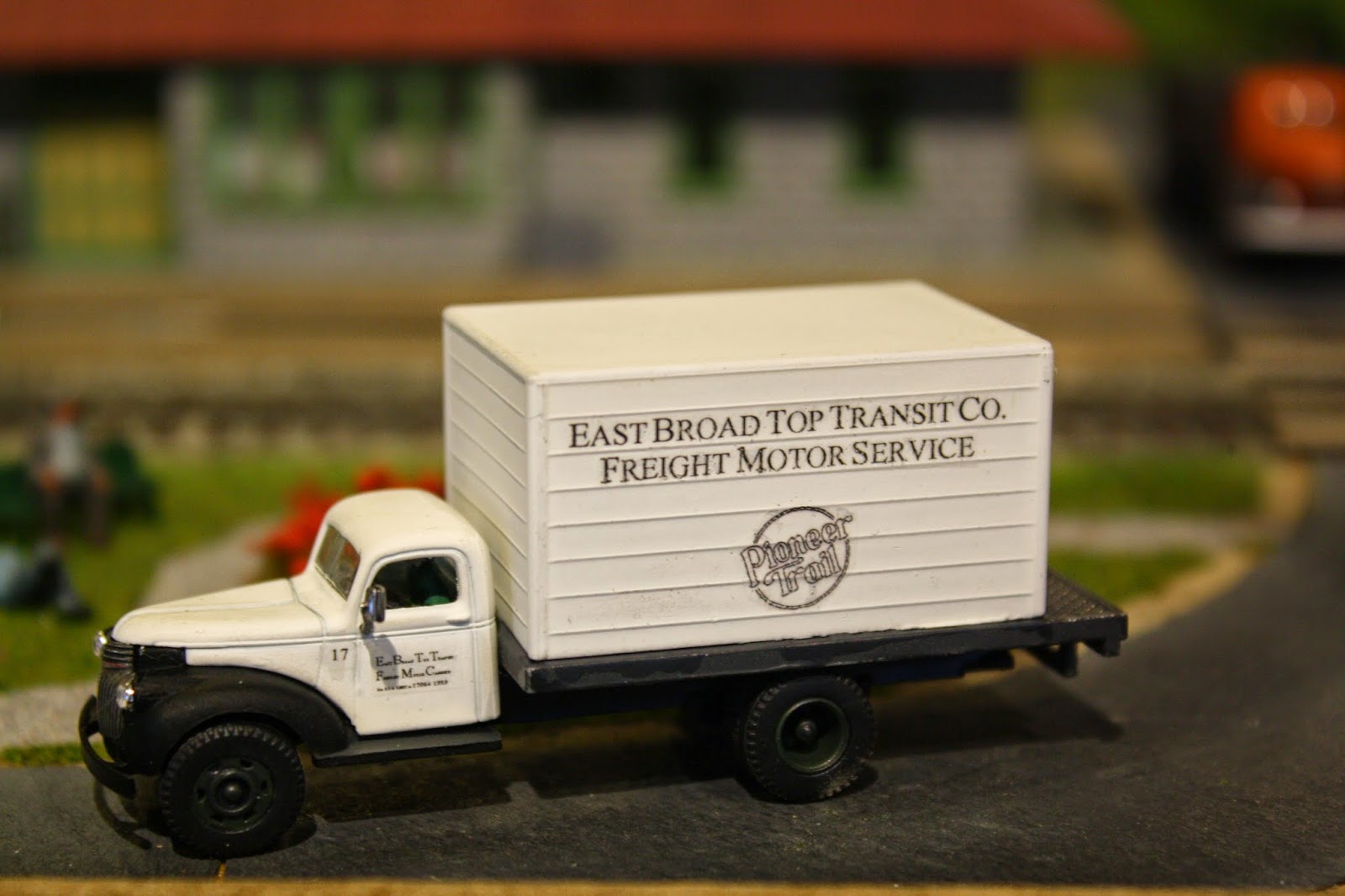 Another photo of the same truck, viewed from the passenger side, at the Blacklog depot. 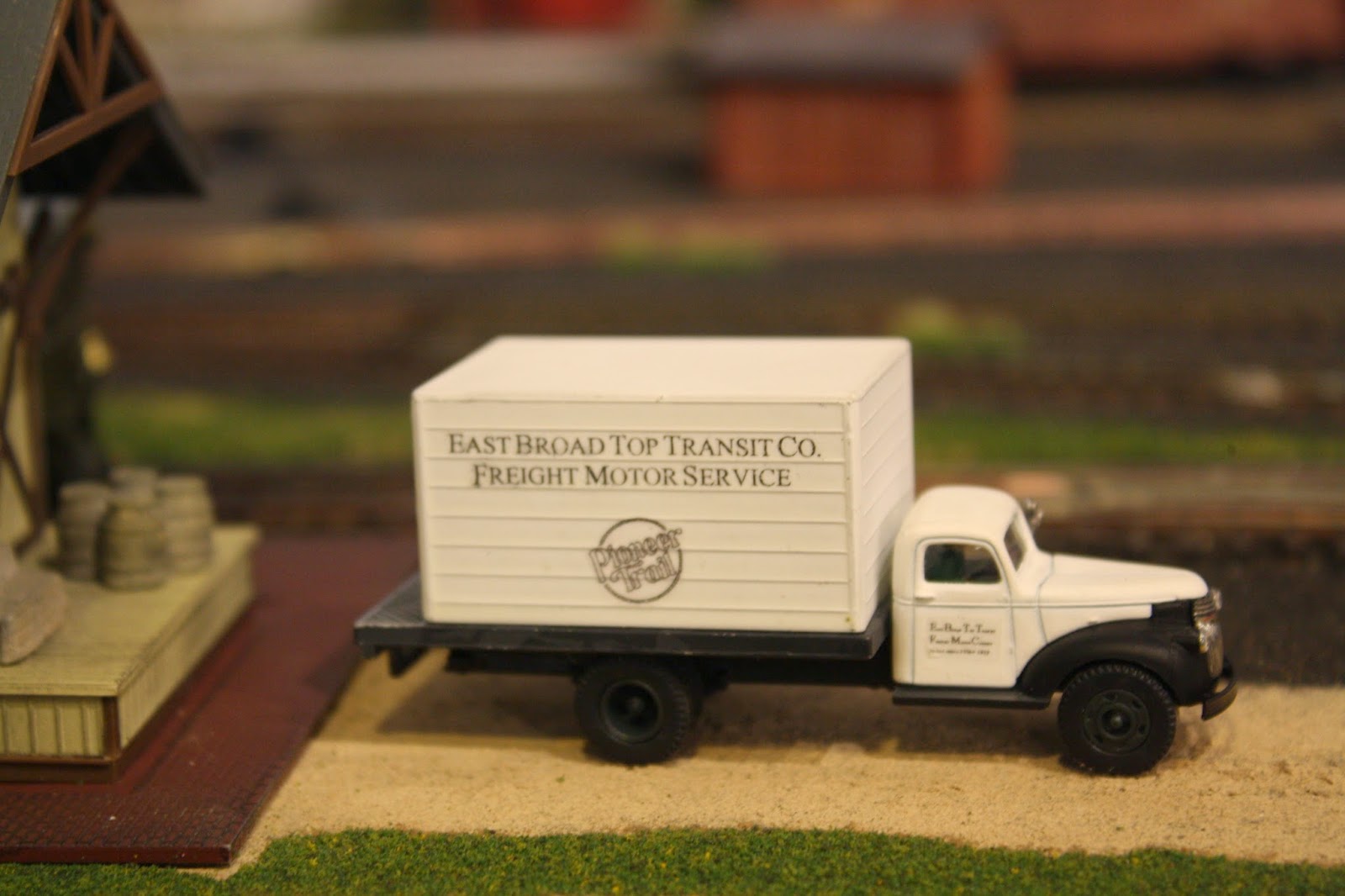 A second truck used a Golden model for the truck body.  Golden models are all metal, as opposed to the Mini Metal trucks, which are of plastic construction.  They are also more difficult to take apart for painting.  The Mini Metal vehicles can be disassembled by unscrewing a small screw on the underside.  The truck body and cab then pop off the frame, and it is a simple project to install a driver.  The Golden model trucks are assembled with rivets, which have to be ground off using a Dremel tool,.  I also found that the Floquil white paint I used does not adhere as well to the painted metal body.  To hide some of the flaws from painting, I dusted the body with black weathering powder, and the foot boards and fenders with mud colored weathering, to suggest a truck that has been working hard on the back roads of southern Huntingdon County. 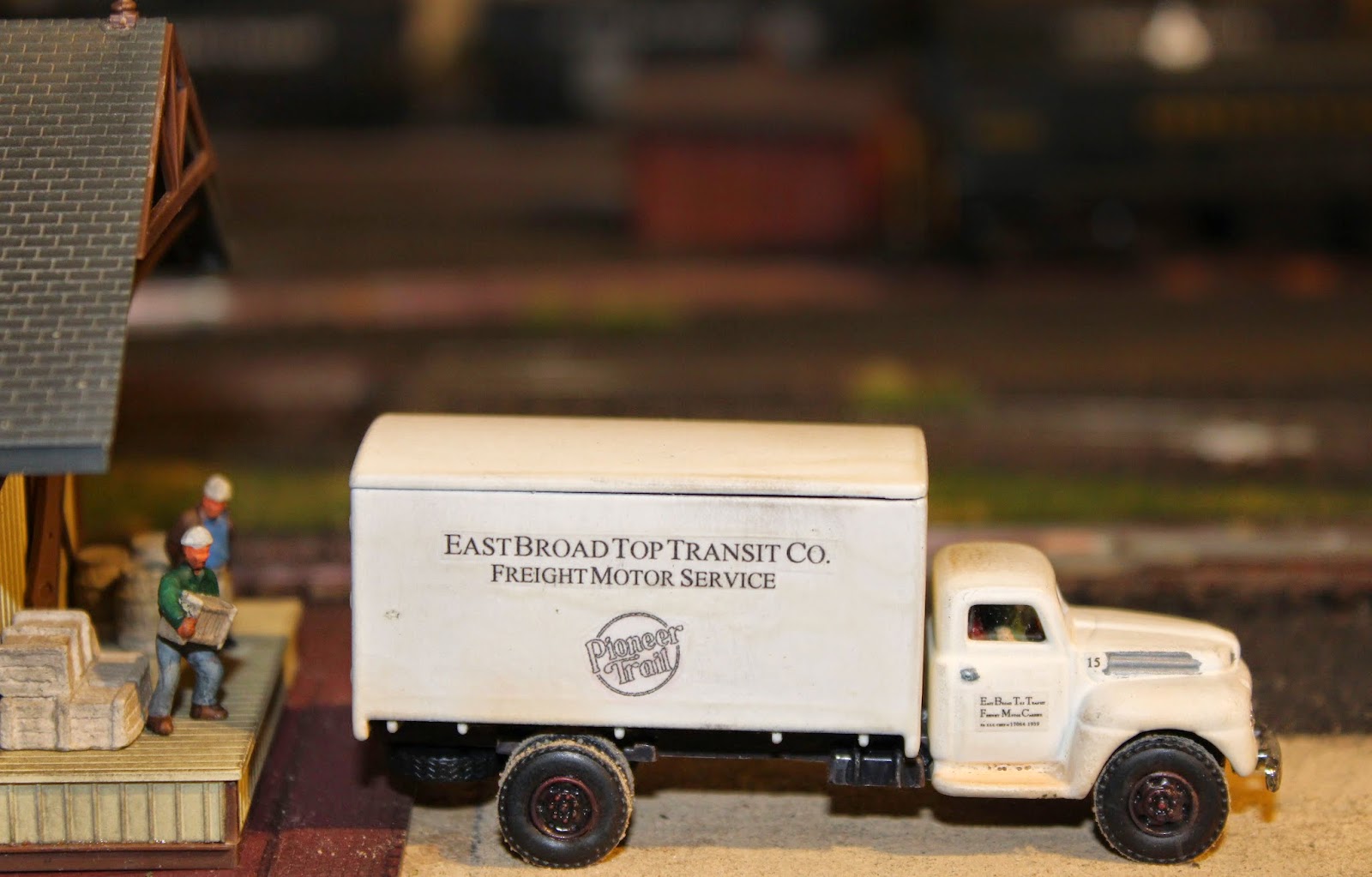 Creating a model of an EBTTC bus was even more challenging.  The only bus I could find that was appropriate to the era was a 1934 Ford 21 passenger bus kit by Jordan.  Although the EBT never used Ford vehicles, I once again applied Rule #1 and decided that during WW II the railroad experienced an uptick in ridership due to the war effort, and needed to expand the fleet.  The only bus available at the time was a used Ford, which was pressed into service, and continued to operate until the early 1950s.

Fortunately, a photo of bus #9 in the Timber Transfer article (the very same bus restored by John Corson) is somewhat similar in appearance to the Jordan kit.  From my research, I discovered that the first color scheme used by the EBTTC was red and white, but after the company merged with a local Altoona bus line, the colors were switched to blue and white.  I painted the kit prior to assembly by spray painting the entire body with Floquil flat white.  I then hand painted the blue trim using Model Master RAF Azure Blue (ANA 609).  I specifically wanted a light blue, since I wanted to include lettering for Huntingdon, Mount Union and Orbisonia, similar to what is seen in the photo, but I have no way to produce white decals, and black lettering would not show up well on a dark blue background. 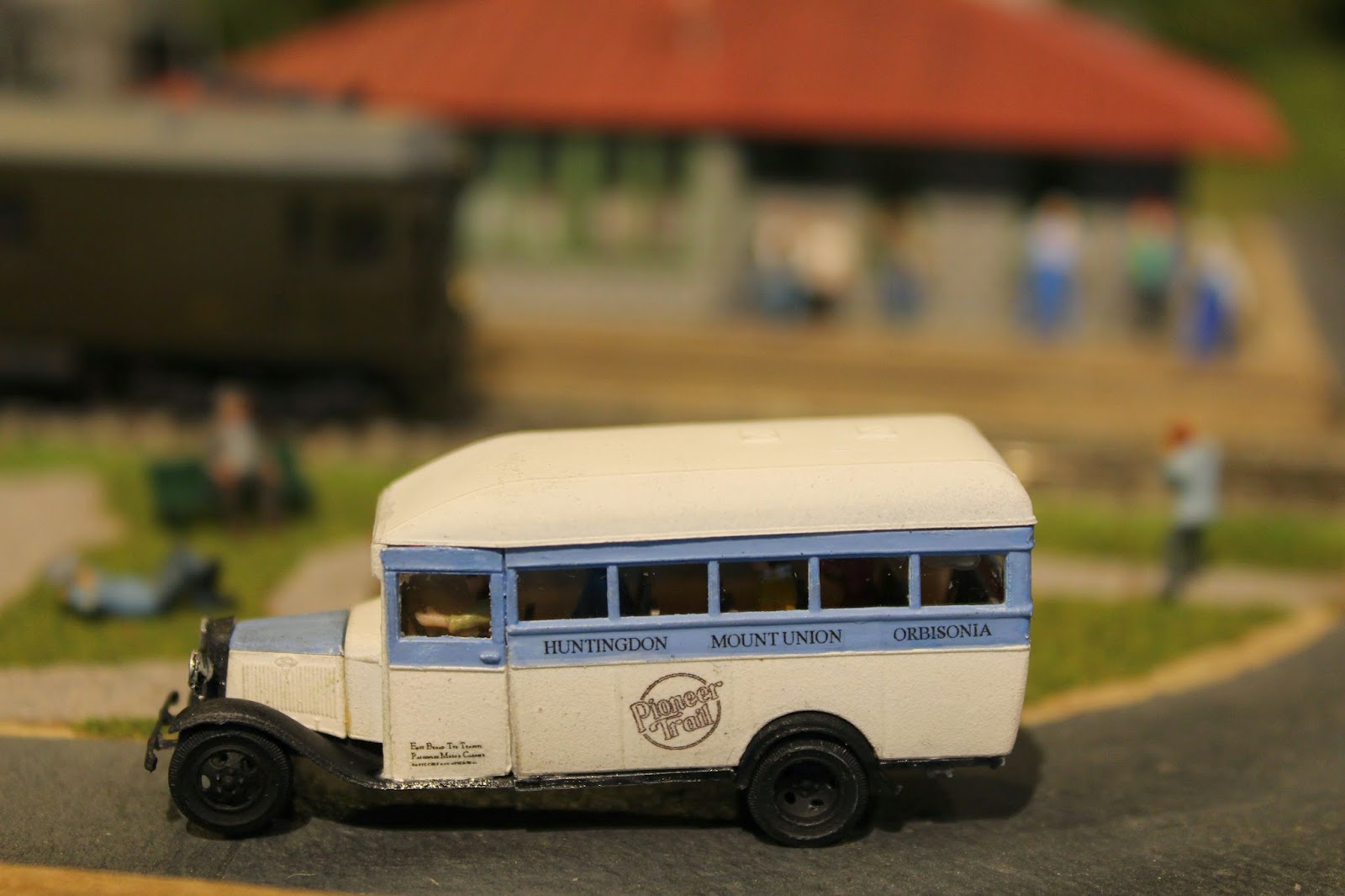 Before gluing the top and sides to the underframe, I installed a driver and several passengers.  The seats that come with the kit are very close together, and fitting the riders into the bus required clipping off their legs and feet; fortunately, only the upper bodies and heads are visible through the coach windows.  Here is a view of my EBT Transit Company bus stopping at the Robertsdale station to pick up and drop off passengers.  As one can see from the sign on the front of the vehicle, this bus is bound for Mount Union. 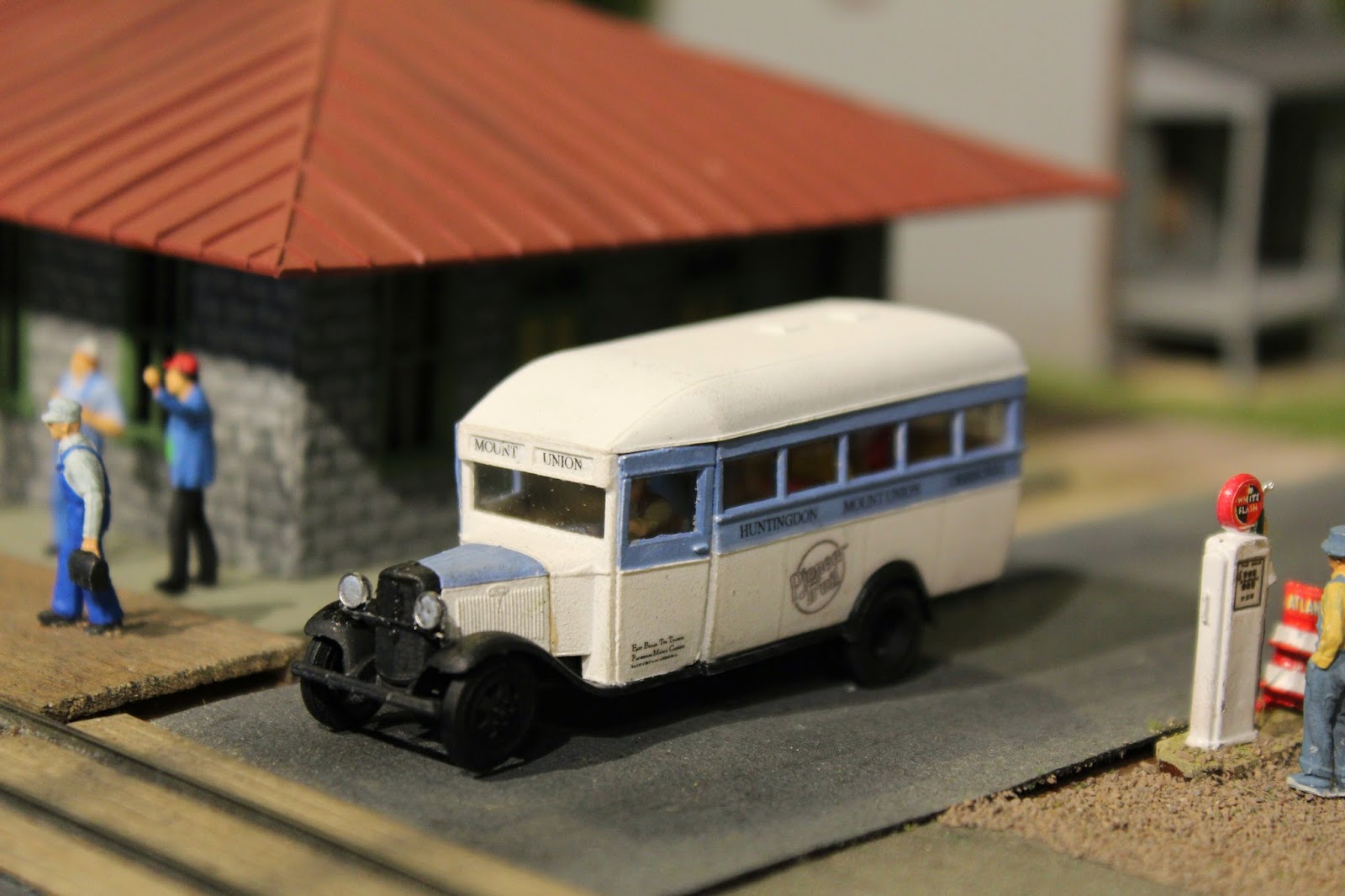 So I now have a small fleet of two trucks and a bus lettered for the East Broad Top Transit Company and reflecting an era when small narrow gauge railroads were struggling to compete with expanding highways and the growth in car, bus and truck traffic.
Posted by Russ Norris, MMR at 11:31 AM No comments: