After finally finishing repairs to my brass EBT 2-8-2 valve gear, it was time to get back to work on the the little mining town of Robertsdale, Pennsylvania, southern terminus of the East Broad Top Railroad.  The project began with the idea of recreating "company square" with its four company buildings: the company store, railroad station, post office and coal company offices.  (You can read about them in my earlier blogs.) 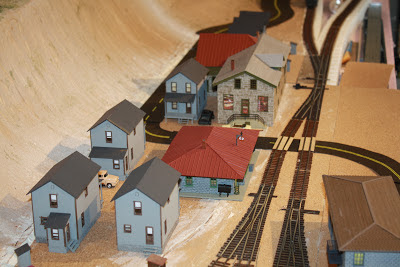 Around the center of "downtown" I built a number of company houses, for the families of those who worked in the company owned coal mines.  Further south plans call for a large coal mine and tipple; but to the north, just the rear of the company store, I had an empty space that cried out for something interesting to fill it.  The area in question was long and relatively narrow --  just about a foot long in HO scale!  What could I put in such a small space?

Robertsdale was, and is, a residential community.  The company store was for decades the only game in town for groceries, mining supplies, clothes, shoes -- you name it.  Aside from the station and the other two company owned structures, the rest of the town was mostly churches, schools of course, company houses, owned by the railroad and coal company right up into the 1950s.    There really wasn't a place for other lineside businesses or similar structures.

It was at this point that fate intervened in my musings.  I was flipping through some old copies of Railroad Model Craftsman when I ran across an article in the July 2010 issue that I had bookmarked for future reference.   In it, Gerry Leone described how he built a row of older homes backing up to the tracks out of City Classics company house kits.  Since he needed to fill a narrow space like mine, he decided to cut the styrene houses in two and make two buildings out of one.   The cut off ends of the houses faced away from the tracks, and were not modeled.  The resulting row of houses looked like this: 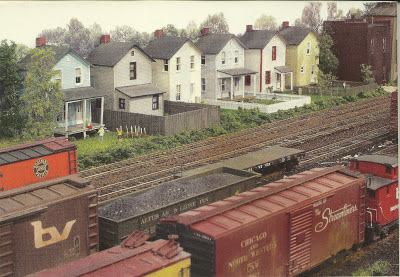 A little neighborhood, backing up on the tracks!  What a great idea!  And the wheels began to turn.  But I didn't want to use the City Classics kits for this application.  I already had four of them in the center of town, and while they were great houses for Robertsdale, I was looking for a different effect here.  Looking through my stash of parts left over from other building projects, I discovered that I had three or four kits of Model Power's Sullivan House.   It's a great model for kitbashing, and I had already used parts of two in the town of Blacklog.   The various versions of Sullivan's House all have a wing that attaches to the main part of the house.  The wing, it turns out, has window and door openings on all sides, even though one side is attached to the main structure.   In fact, one could easily convert the houses into two structures -- one standard rectangular house, and a smaller building that would be perfect for my little neighborhood. 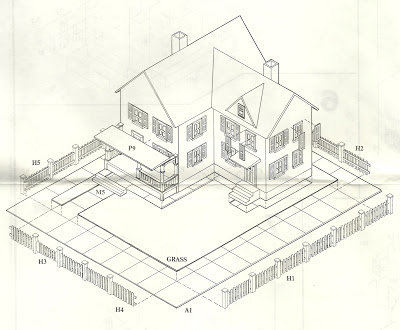 After some digging around, I found parts for four of these little company houses.  In the drawing from the Sullivan's House kit (above) you can see the wing to the right that I planned to convert to a separate house.  The roof was replaced with styrene, and the shutters were eliminated as too frilly for such a basic dwelling.  The project was simplified when I discovered that the doors and windows were interchangeable in these kits, making it easy to move the back doors to the side facing the tracks.  I tried to give each of the four houses their own distinctive character -- two were left with lap siding, two were covered with paper Insulbrick shingles from Clever models.  Here is how they looked when I began. 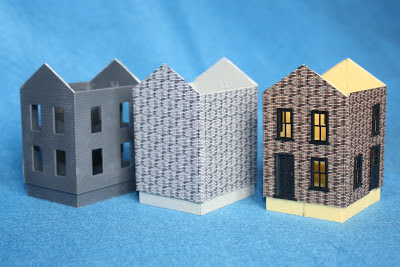 Four of these little homes would just fill the empty foot long space along the tracks.  The front of the houses face a tree covered hill, and are unseen.  The left end of this little community backs up to the rear of the company store.  To the right a railroad spur climbs steeply up to a logging site and sawmill.  The houses would be a fine way of separating the two scenes.
I cut a sheet of styrene to fit the area where the houses would go.  It was a lot easier to work on this project seated at my workbench.  As in Gerry Leone's RMC article, the houses would have distinct personalities, with various kinds of grass, gardens, fences, and especially people!  These houses would be lived in, and the various families would give their backyards a distinctive stamp.  Here is how the styrene base looked as it was laid out.   At this stage, I already had an idea of how the backyards would look. 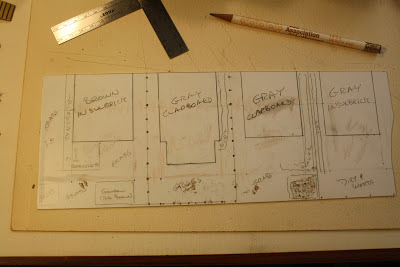 ﻿
With the lots laid out, I painted the areas where I would apply static grass, gravel walkways, vegetable gardens, or just plain dirt. 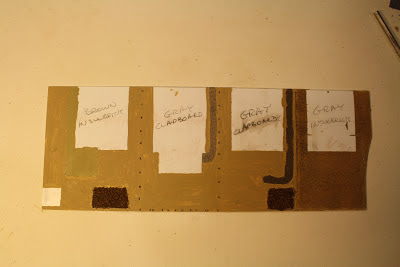 The next step was to apply dirt, gravel and , of course, static grass.  This was my first experience with using static electricity to apply grass fibers, and it worked surprisingly well.  I used an inexpensive device called a "Grasshopper" that I bought from Dave Leider (sooauthor@netzero.net), and it appeared to work as well as the much more expensive version from Noch.  I played with different types of grass, shorter and longer fibers, and blended grasses.  The initial results turned out even better than I had hoped. 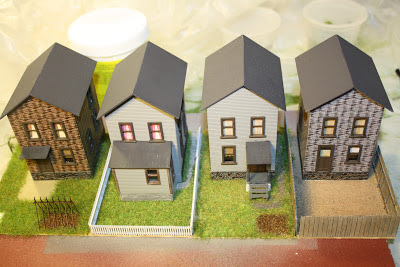 You can begin to see the distinctive character of each home from the details of their backyards.  The house on the left has a cement patio and walk.  A small garden plot with a trellis for pole beans (Noch) faces the tracks.  The next house's yard is neatly outlined with a typical white picket fence that came in a package of fencing from my local hobby store.  This house has a small addition which I cannibalized from one of my City Classics company houses.  Notice the light color gravel path along the side.  To the right is an unfenced yard with patch for tomatos and a small back porch.  A plank fence encloses the last house on the right, which I wanted to make into the neighborhood eyesore (every town has one).  Instead of a lawn, this dwelling's yard will be mostly dirt and weeds.
The next step is to fill in the people and the details that bring a community to life. The figures are from various sources, including Woodland Scenics.  The pole beans are from Noch.  The tomatos are from Creative Accents by Bill Lankford, which I found in the Scenic Express catalog, along with the tufts of buffalo grass weeds from MiniNatur.  Here is how the diorama looked when finished. 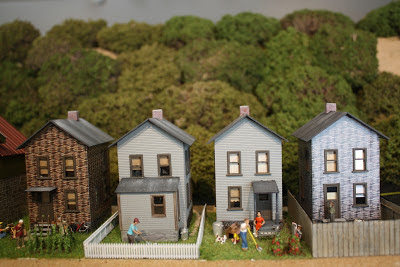 You can just see the red metal roof of the company store at the left end of the photo.  Following another cue from the RMC article, I named the families of this little trackside community alphabetically.  The first house on the left belongs to an elderly couple, the Andersons, who enjoy gardening and visits from their grandson, seen at the very left, working on his entry to the annual soap box derby. 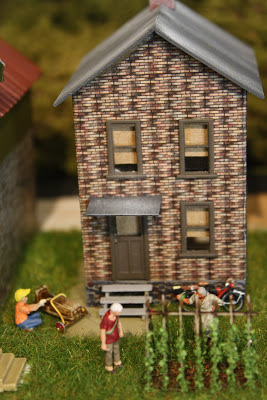 To the right of the Andersons is the Benson family.  Mr. Benson is proud of his little company house, and can be found on any Saturday morning mowing the lawn.  I used a short grass fiber on the lawn to suggest a very manicured backyard. 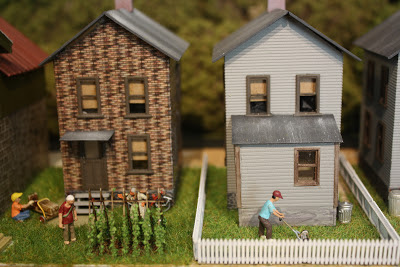 On the other side of the Benson house live the Cappelletis, a young family with a daughter who loves to play with the family dog.  There were a great number of Italians who settled in Robertsdale to work in the mines, and many still live there today.  This morning, Mr. Cappelleti is working on his tomato plants, while his wife plans a spaghetti dinner with fresh tomato sauce. 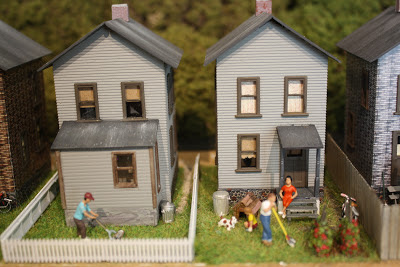 The last house on the right, at the very edge of town, belongs to the Dugans.  The Cappelittis are glad to have the tall board fence between them, as Micky Dugan not only likes his beer (even early on a Saturday morning) but does nothing to keep up his house and yard, which is filled with dirt and weeds, not to mention old tires, boards and other junk. 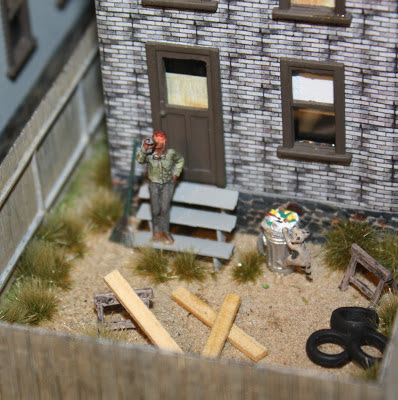 So there you have it!  A little community on the outskirts of Robertsdale, full of character (and a few characters).  Have a spot on your layout you don't know what to do with?  Consider adding a small neighborhood to bring life to the railroad. After all, the folks who work in your industries and stores have to live somewhere, right? 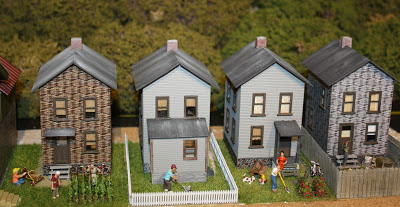