Located in western Massachusetts between Worcester and Springfield, the little town of Palmer is distinguished by a major railroad crossing where seven railroads come together.  From September 11-14 Palmer was host to the 2014 convention of the National Model Railroad Association's Northeastern Region. Nearly 200 model railroaders from New York, New Jersey and New England visited and operated area layouts, attended clinics, displayed models and photographs, and generally had a slam bang good time together.  It was also my first model railroad convention, and I packed as much as I could into four days.

The convention headquarters was the Steaming Tender Restaurant, located in a historic railroad station at the intersection of the New England Central Railroad and the CSX Selkirk-Boston (ex-Boston and Albany) mainline. 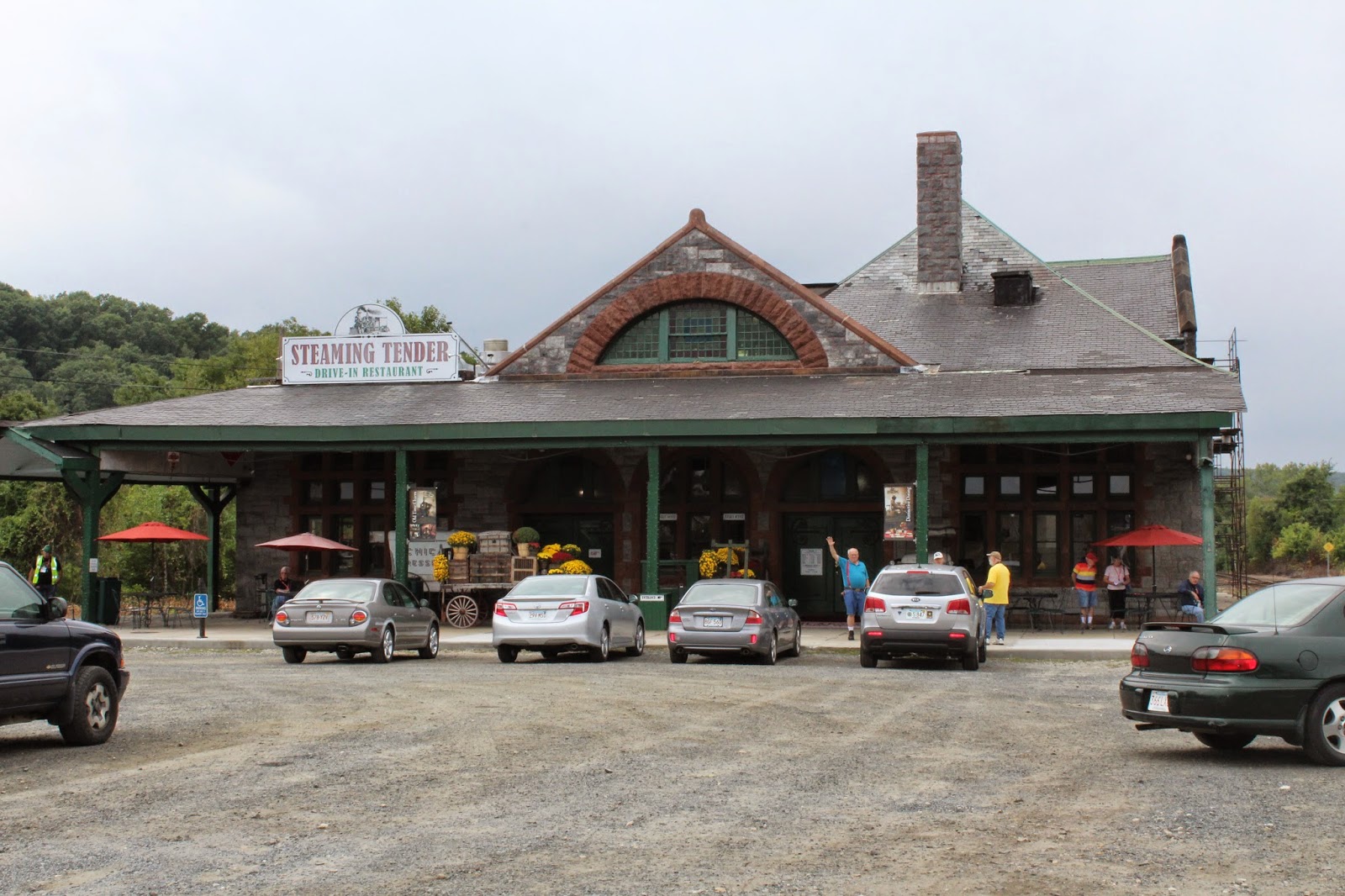 The convention office was located in a historic nineteenth century parlor car adjacent to the restaurant. 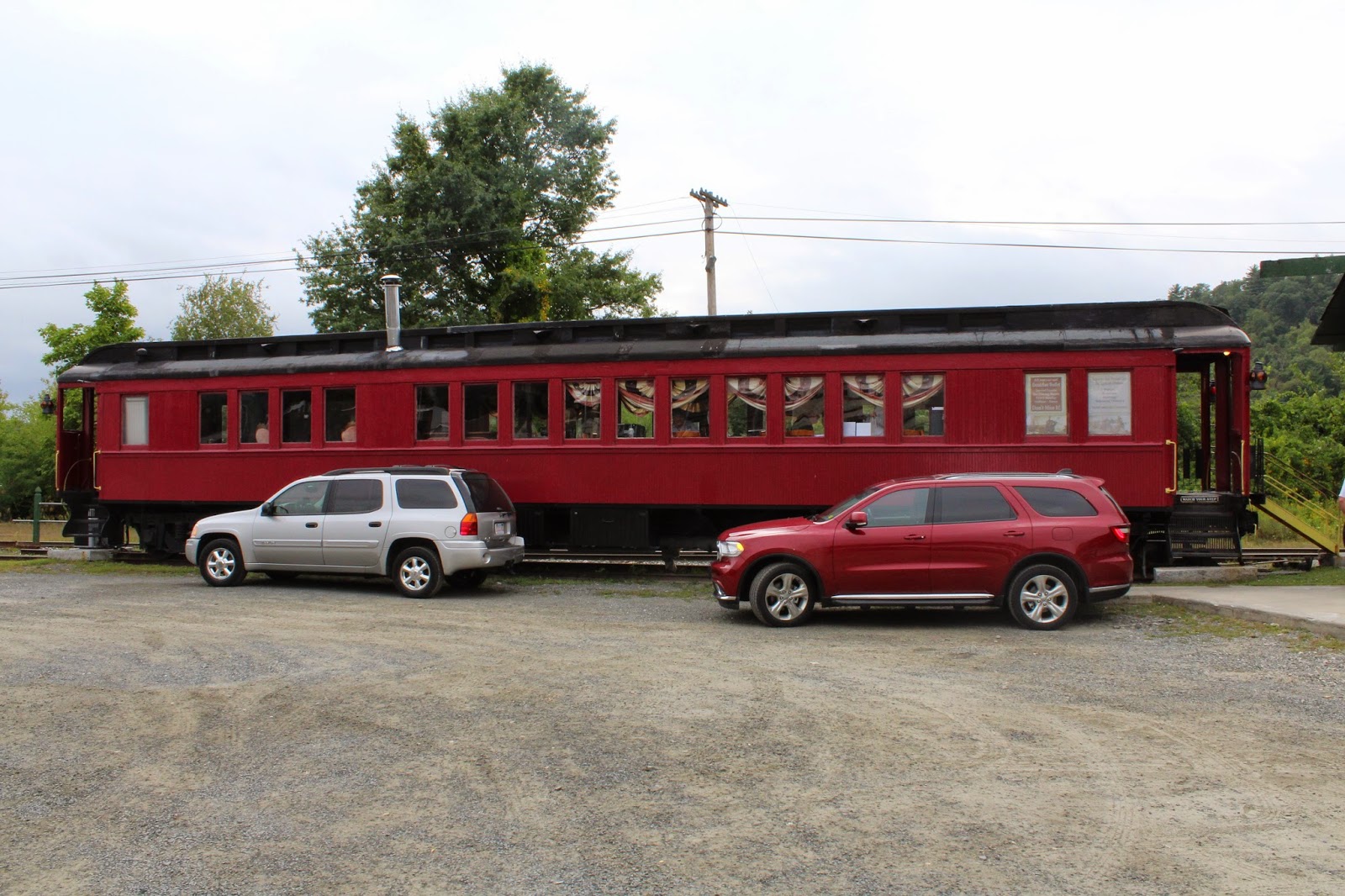 There was lots of activity on the Selkirk-Boston line, including the Amtrak Vermonter, as well as frequent hot shot CSX trailer trains with multiple units on the head end.  Periodically, smaller railroad operations could be seen, including the Connecticut Southern, the Pioneer Valley, and the Massachusetts Central railroads. 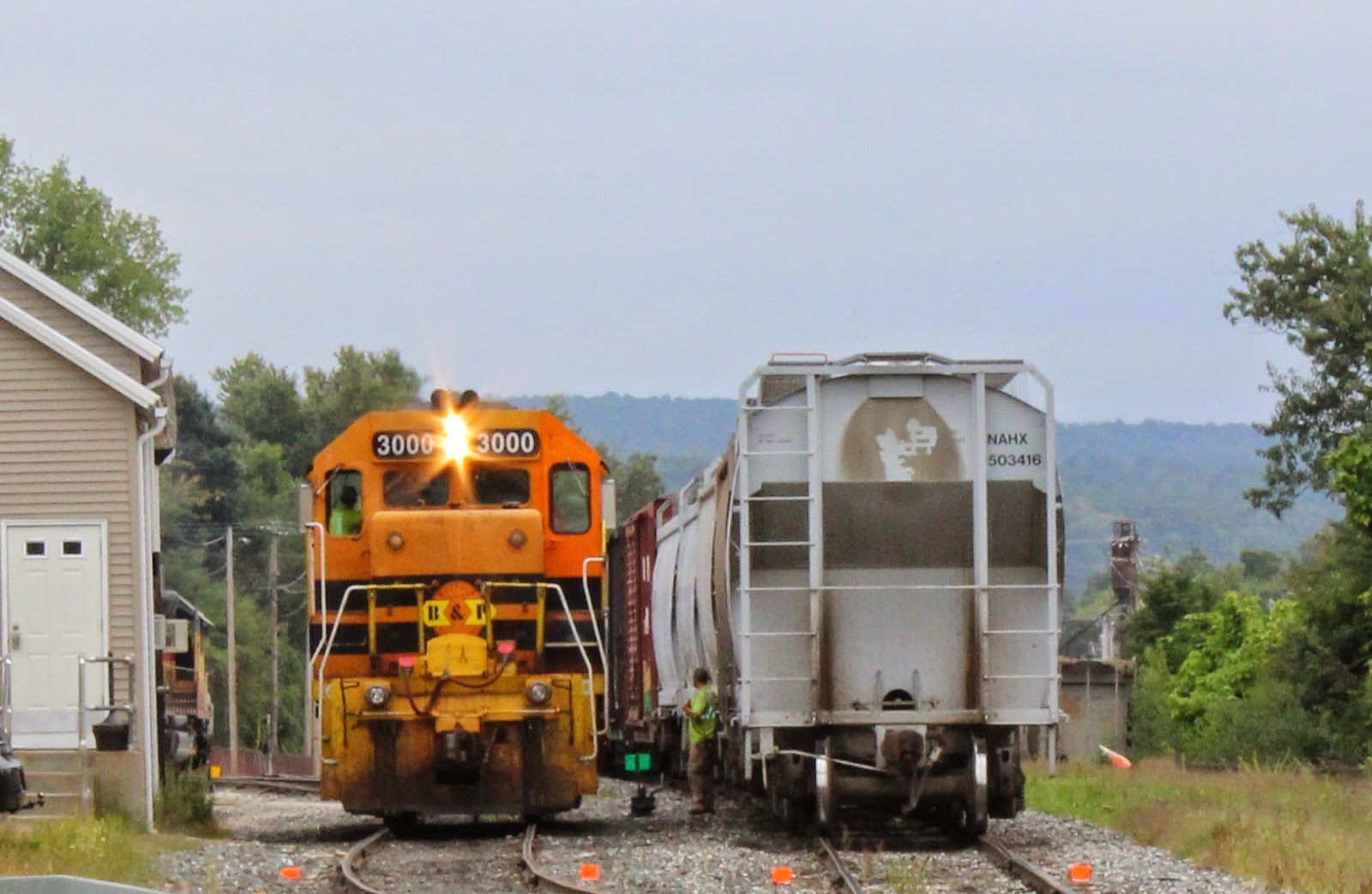 After checking in at the motel and stopping at the convention registration desk, I found myself with some free time on Thursday afternoon.  After a quick check of nearby layouts open for tour I found myself driving to Dan Bigda's two rail O scale Hampden Terminal Railroad in nearby West Brookfield, Massachusetts.  Dan's impressive layout occupies a specially built space in a former barn.  It measures 24 x 52 feet and is about 75% scenicked. 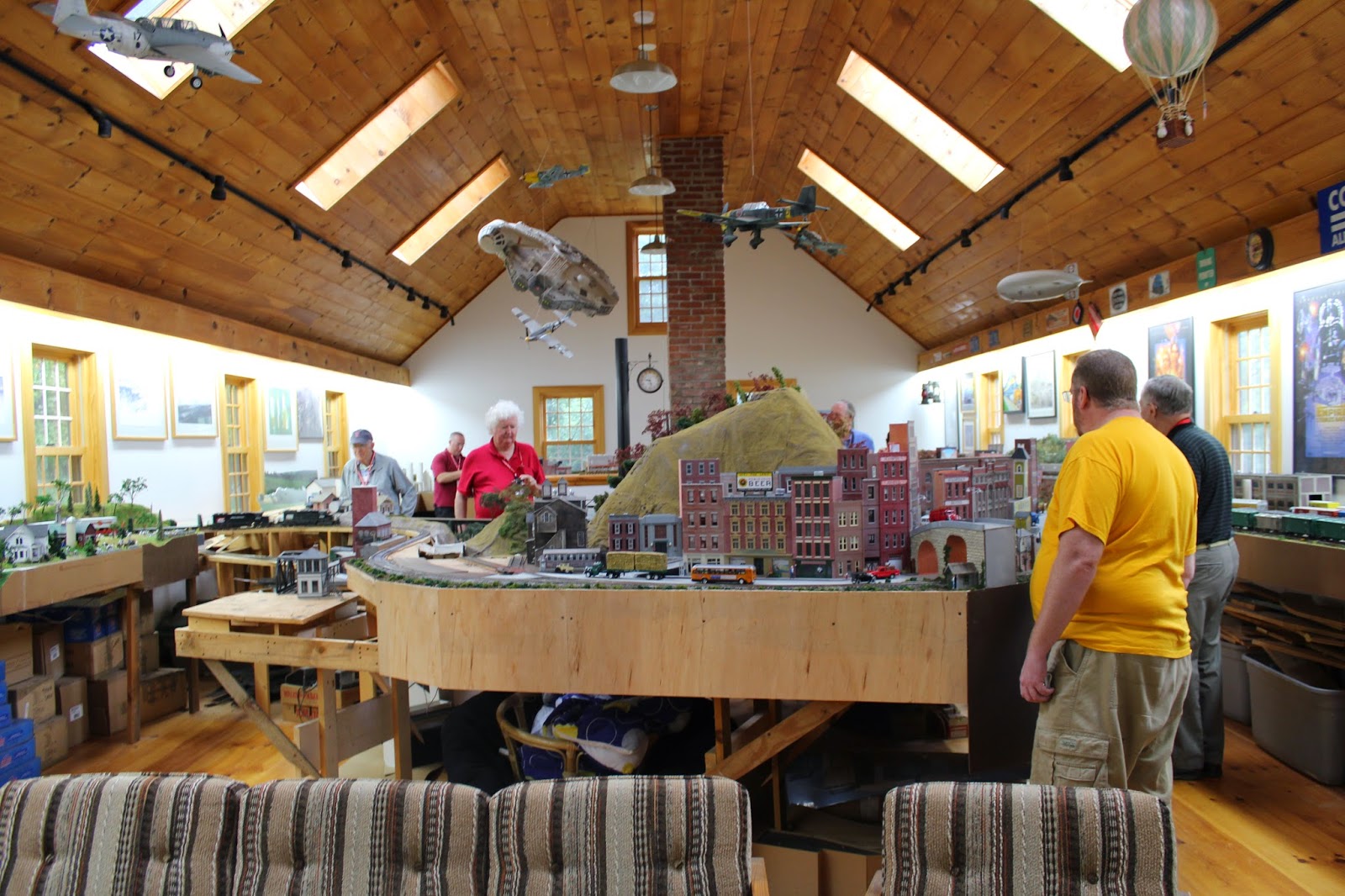 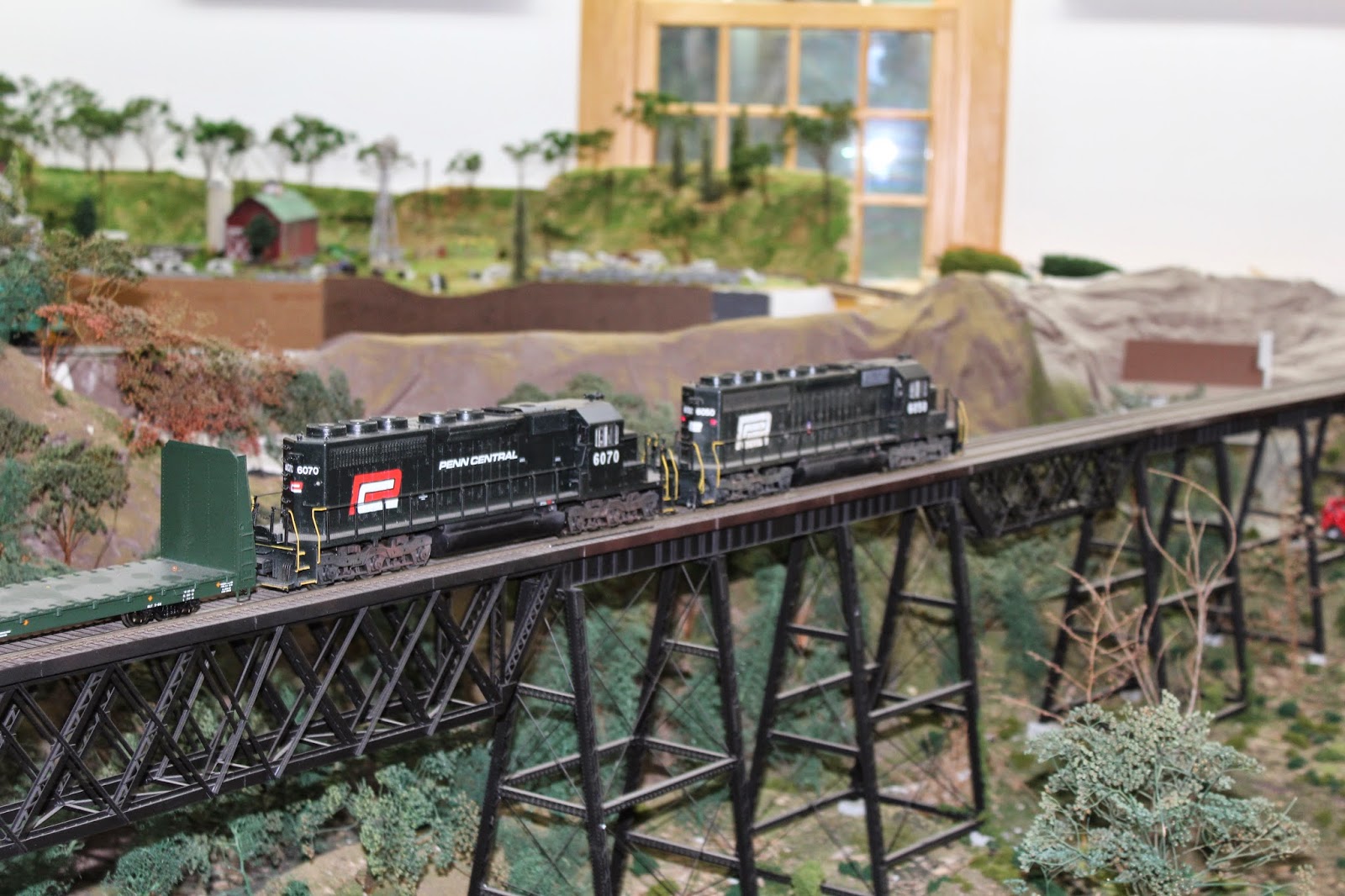 From Dan's impressive layout I drove through back roads and small towns to Easthampton, where I was scheduled to operate Thursday evening on Bill Duffe's stunning HO layout.  The LKJ&W is roughly based on the B&M and Rutland railroads and bears a striking resemblance to Dick Elwell's Hoosac Valley RR.  In fact, Bill and Dick are good friends and the LKJ&W has several structures that were gifts from Elwell. 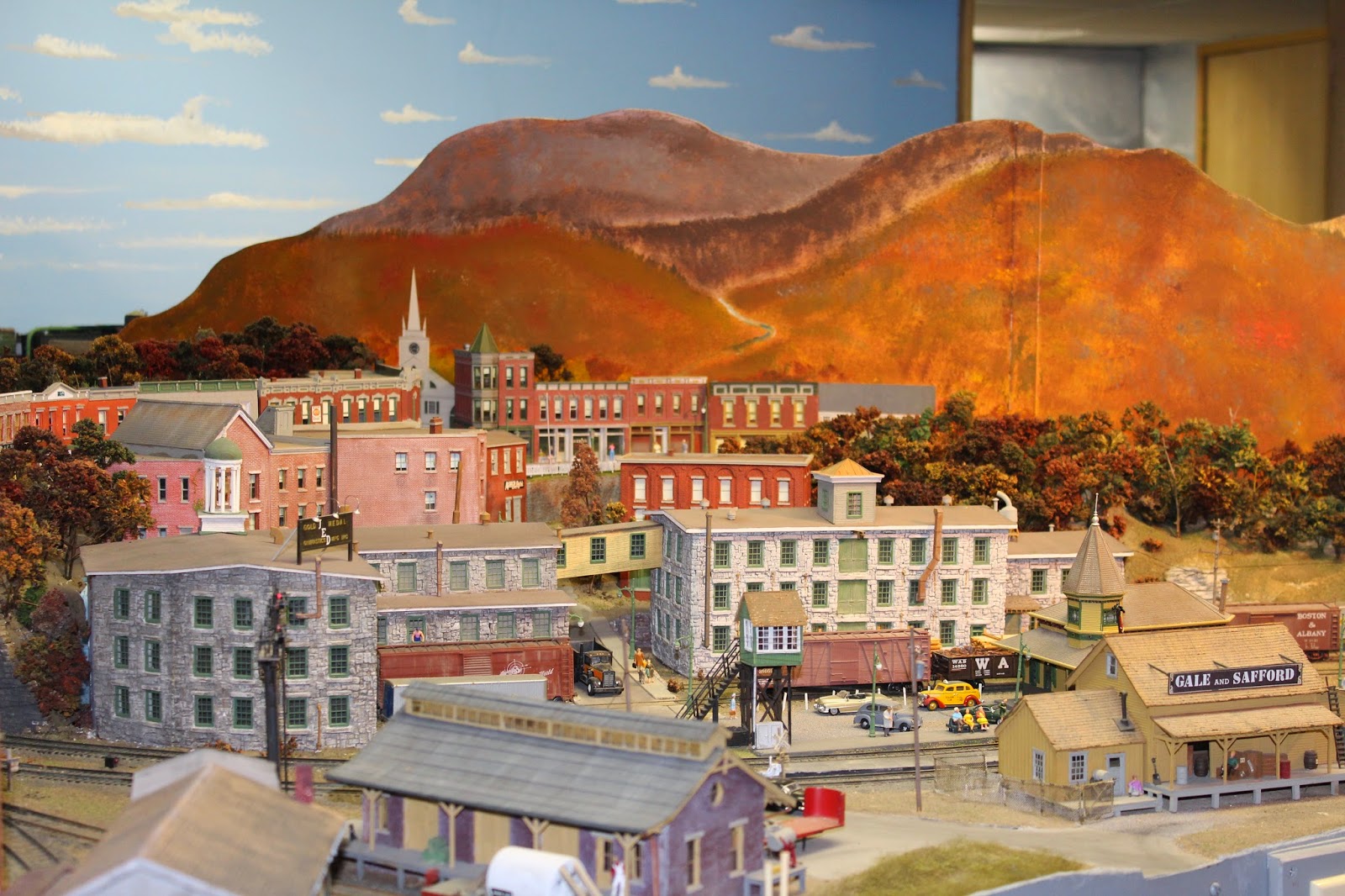 The railroad actually occupies three rooms in Bill's basement, which makes for some challenges when running a through train over the entire layout.  The layout operates on DCC using NCE plug-in throttles.  Only a few engines have sound; otherwise, the roar of a dozen diesel electrics would have made conversation impossible! 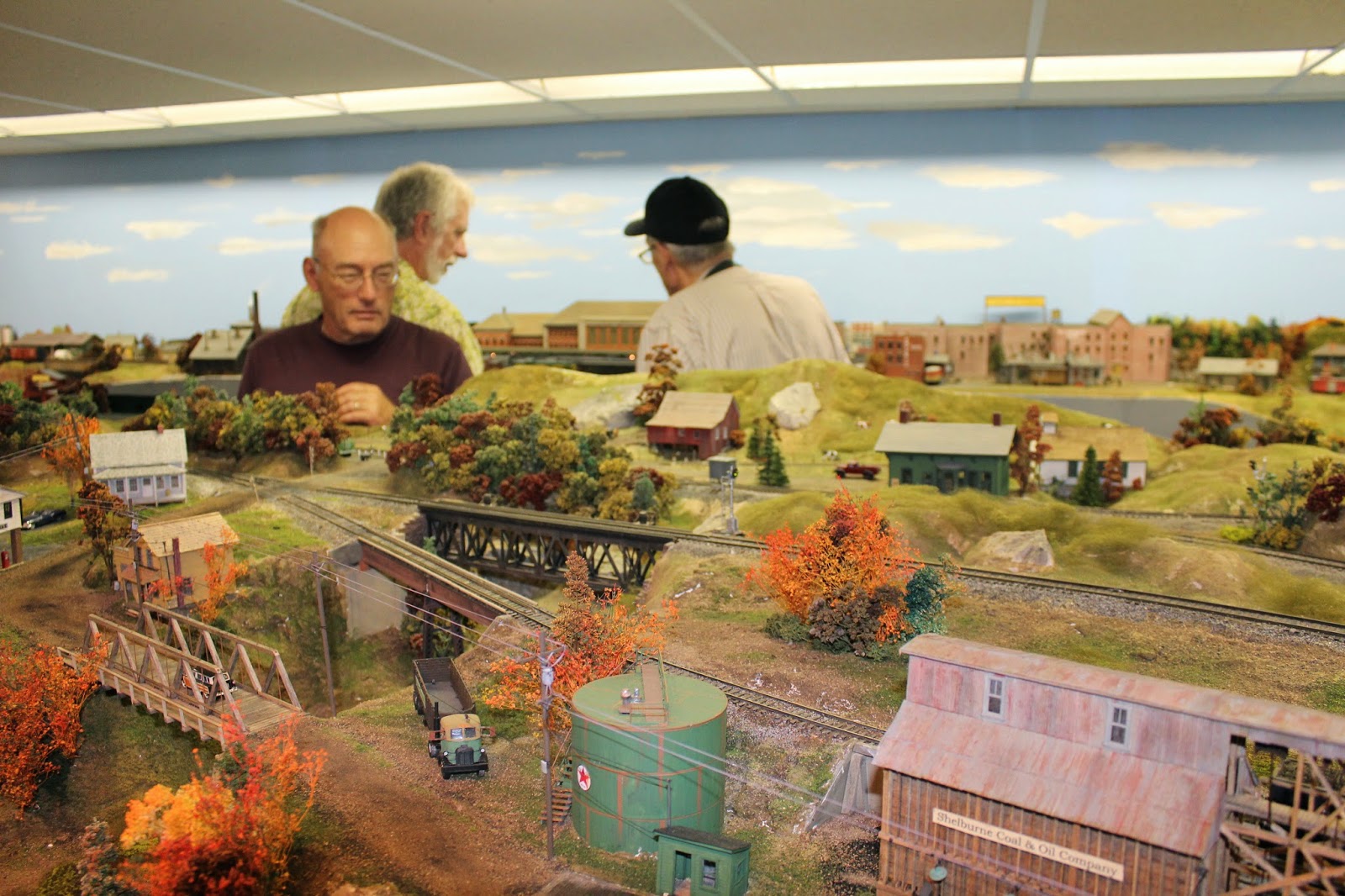 The layout is designed for operating like a prototype railroad.  Each crew was composed of two operators who were given a list of cars to drop off and pick up.  I worked with Bruce Robinson from New Hampshire, representing the Seacoast Division.  As I am a relative newcomer to prototypical operation, it was good to crew with someone who knew what he was doing! 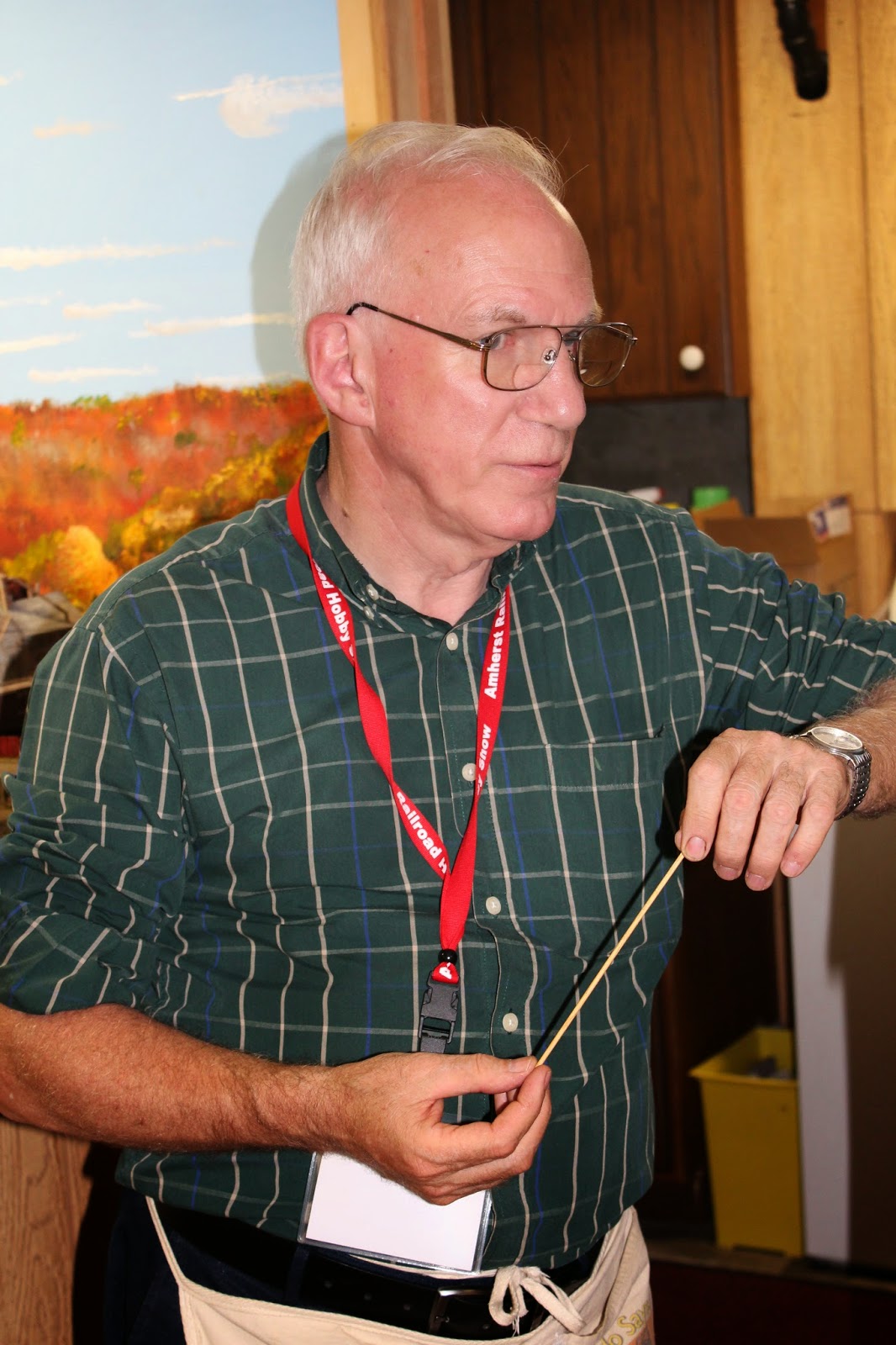 Switching in the yards was done by the train crew, but switches on the mainline were controlled by a central dispatcher.  So trains would have to call the dispatcher and request permission to proceed.  Bill was the dispatcher. 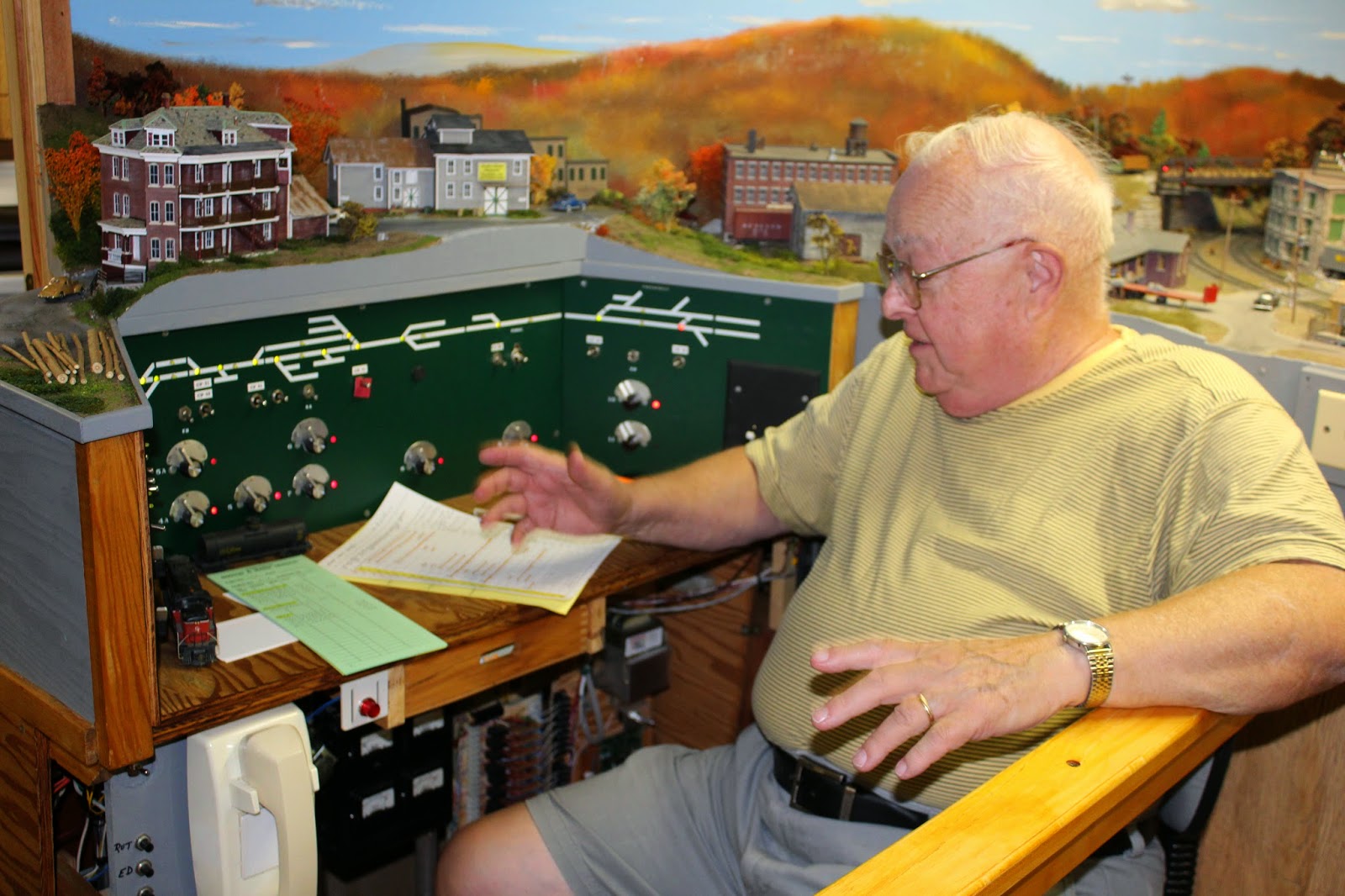 Though this was not my first experience with prototype operations, the sophisticated central dispatching was a new and challenging experience.

Friday morning  I had signed up for a morning hike on the Keystone Arches Trail, which follows a series of stone arch railroad bridges built in the early 19th century  It also tracks the first Wild & Scenic River and the longest free flowing river in Massachusetts, all within the state's largest roadless wilderness.   John Lutz, who had organized the event, put me in touch with Mark Moritz, a surgeon from New Jersey, who drove us to the Chester, Massachusetts railroad station, where we met a dozen other hikers.   I'm the fellow in the front row center with the camera around my shoulder. 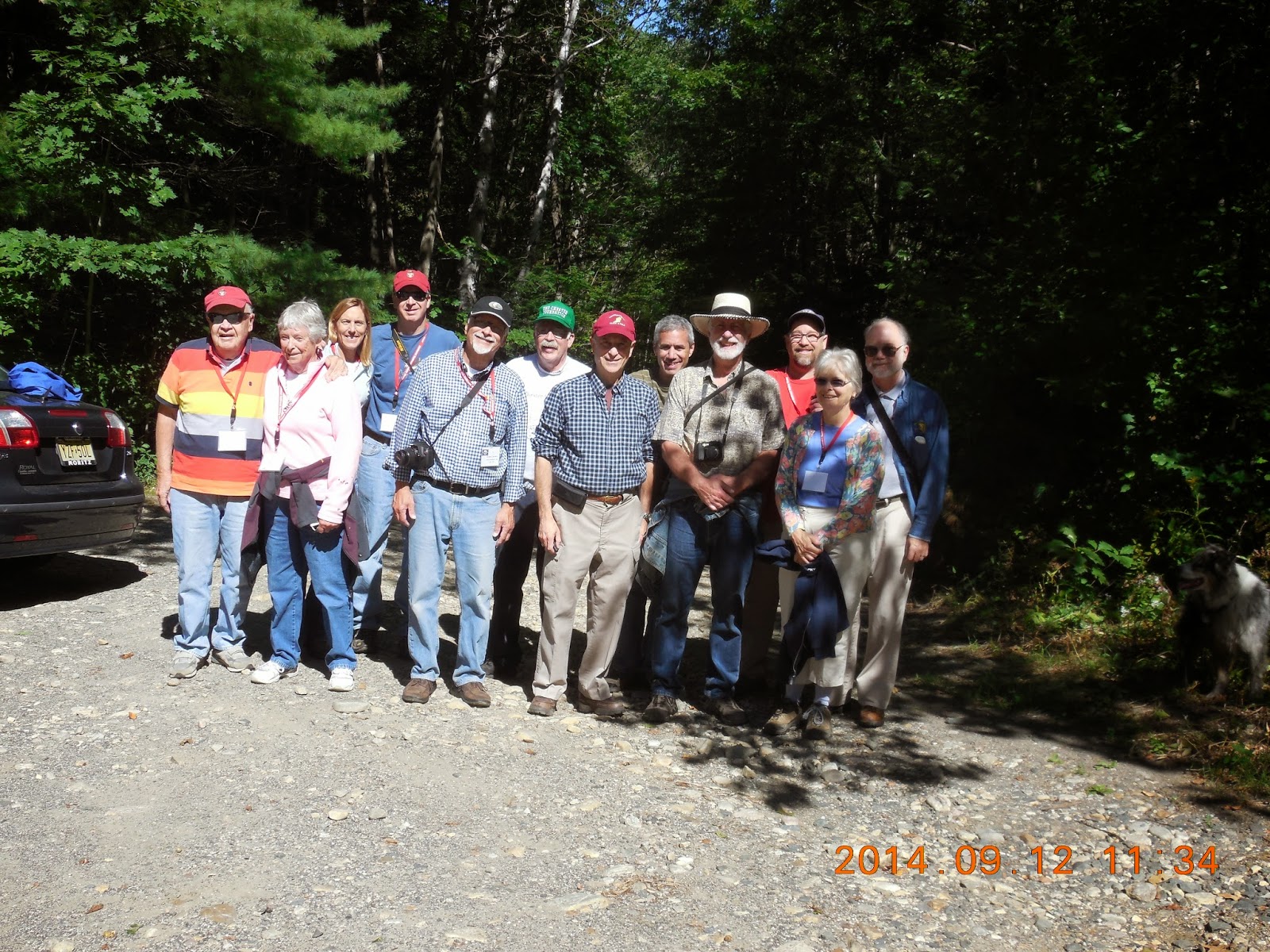 After arriving at the trail head, we descended a rocky path to the confluence of Babcock Brook with
the Westfield River.  Looming above us was a 45 foot high double arch bridge, each arch topped with five keystones.  The CSX mainline runs over the arches, 175 years after they were built. 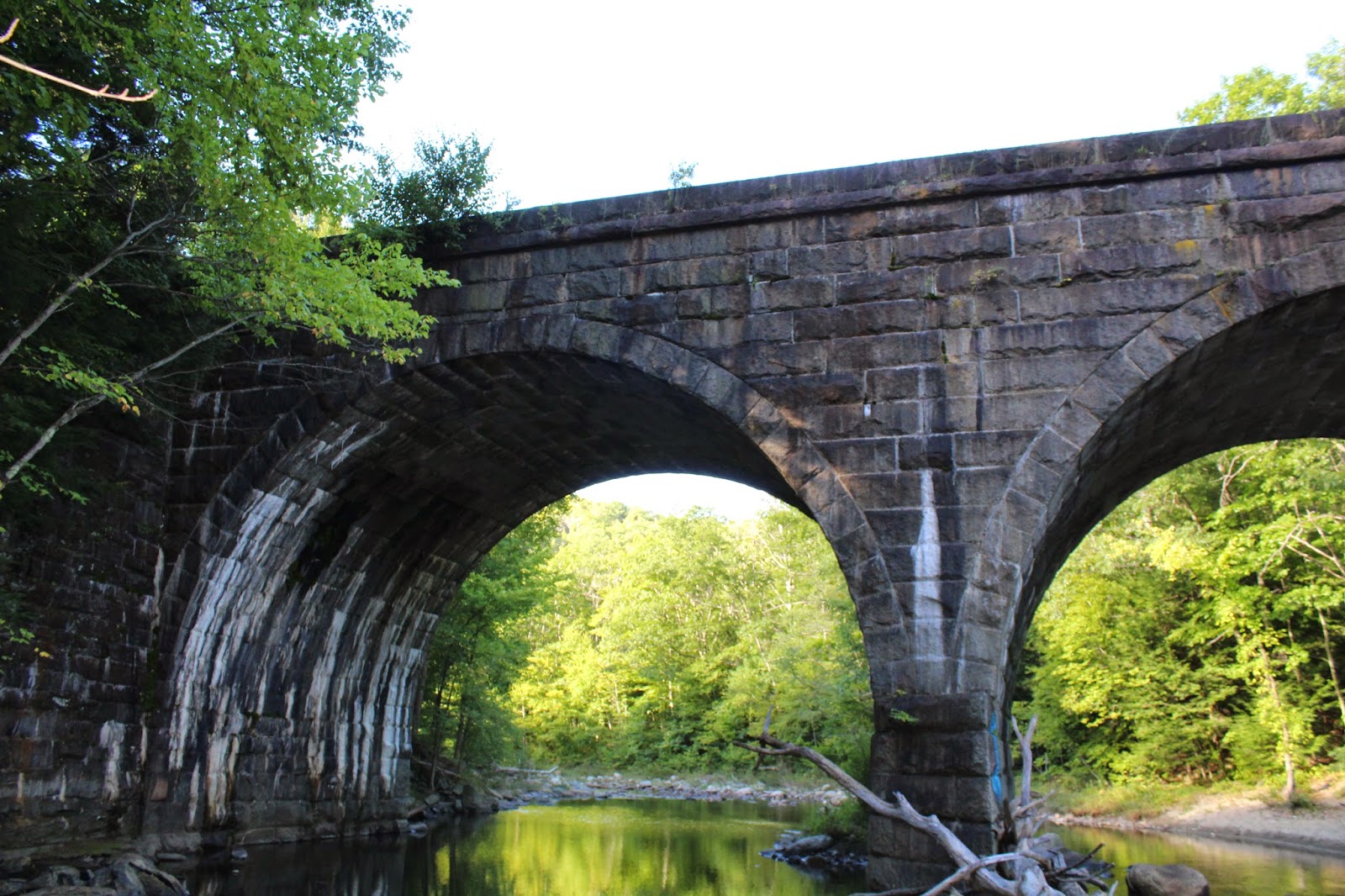 Our guide pointed out that when the bridge was built in the 1840s, railroading was a new technology, but stone arches had been around since the Romans.  The group stood in awe of this majestic structure in the middle of the forest, when suddenly we heard a roar and a whine, following by a CSX freight train passing over the bridge.  Cameras clicked as the locomotives rolled by overhead. 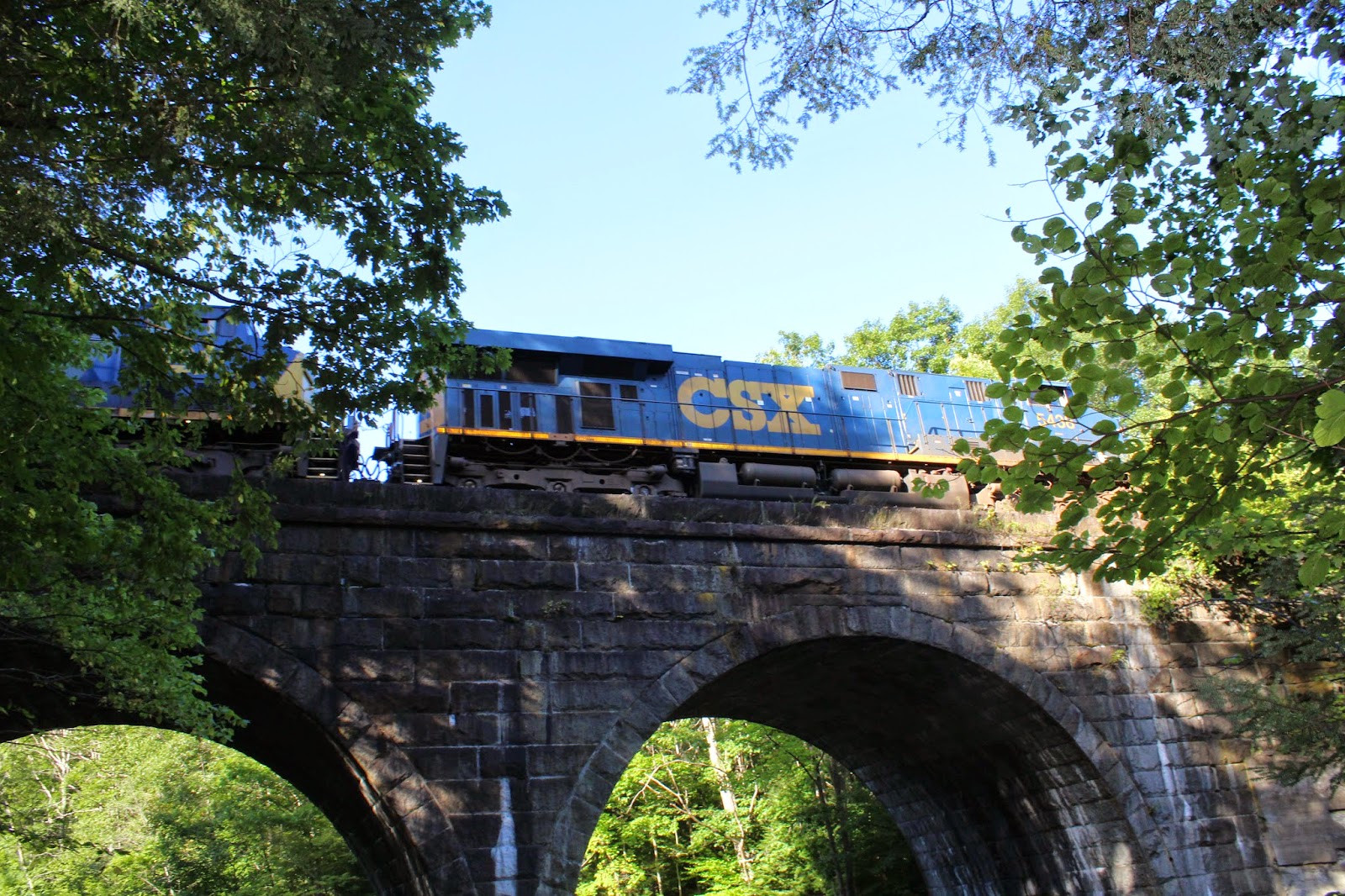 The hike was one of escalating returns.  The farther we went, the higher and more inspiring were the spans.  After a mile of easy walking, we intersected with an abandoned section of the original 1841 alignment and found ourselves standing on the top of a 65 foot arch.  The CSX mainline was across the valley, where soon an Amtrak train flew by on its way east. 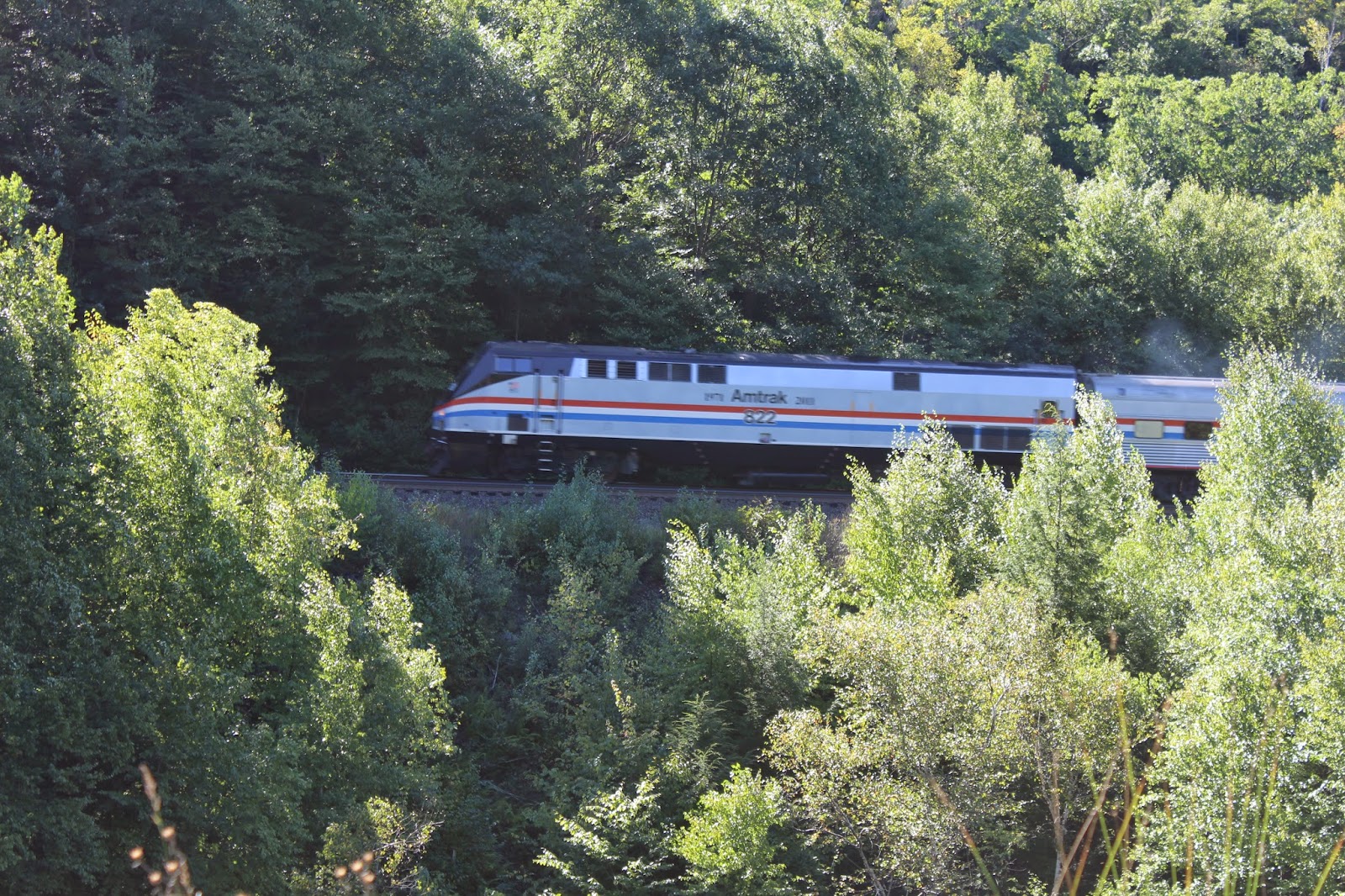 Continuing westward, we encountered a massive retaining wall constructed by the same immigrant stone masons who built the arches.  After negotiating a 60 foot deep hand-hewn cut through the mountainside, we came upon a 70 foot high arch, marking the end of our journey.   Climbing down the steep incline I found myself at the edge of Babcock Brook looking up at the soaring vault above. 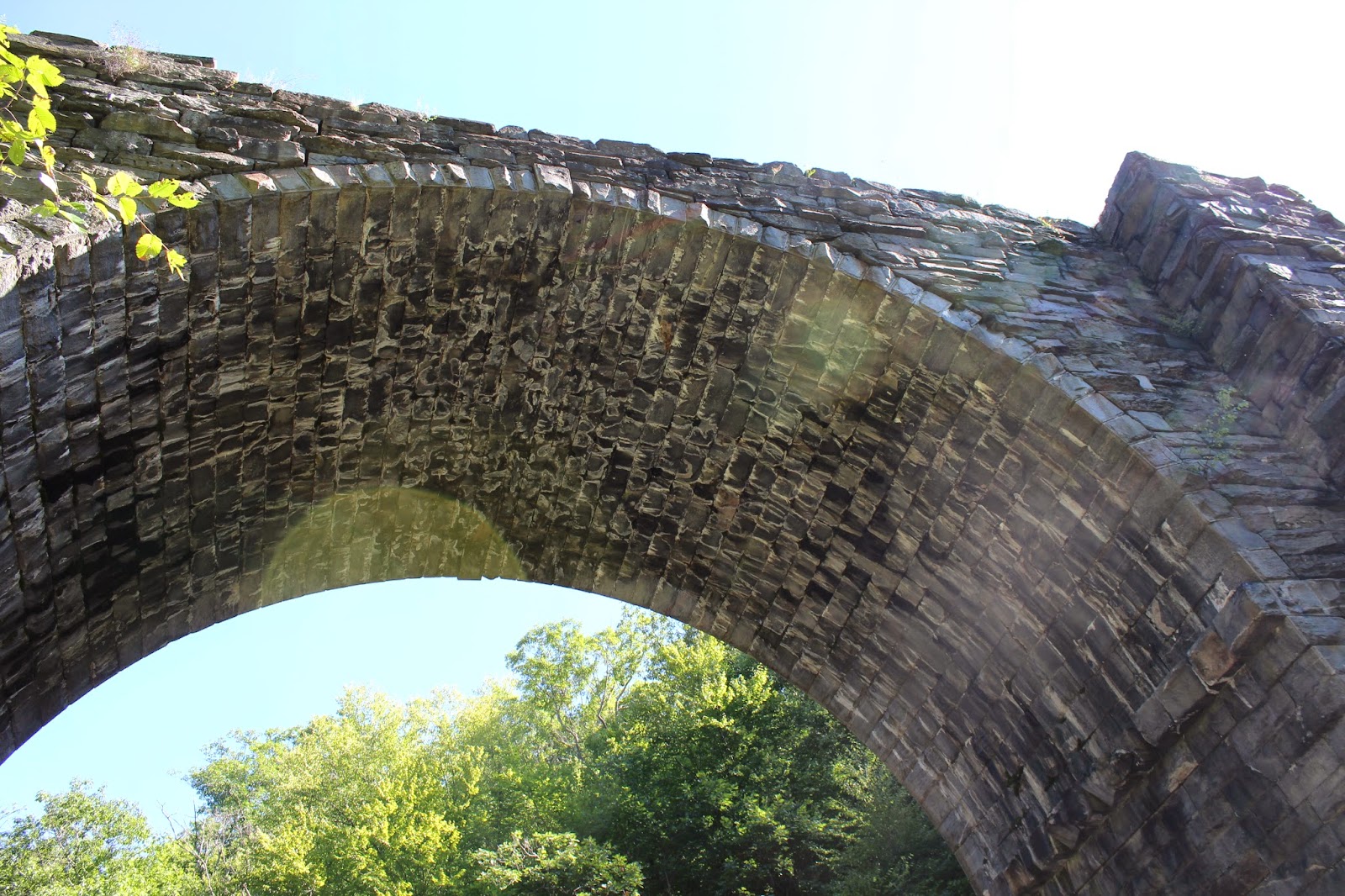 These magnificent arches were constructed mostly by Irish immigrants who left behind home and family to journey to the New World and start a new life.  We found stones marked with the date chiseled by some long forgotten construction worker.  Occasionally, there were individual marks, such as this oak tree. 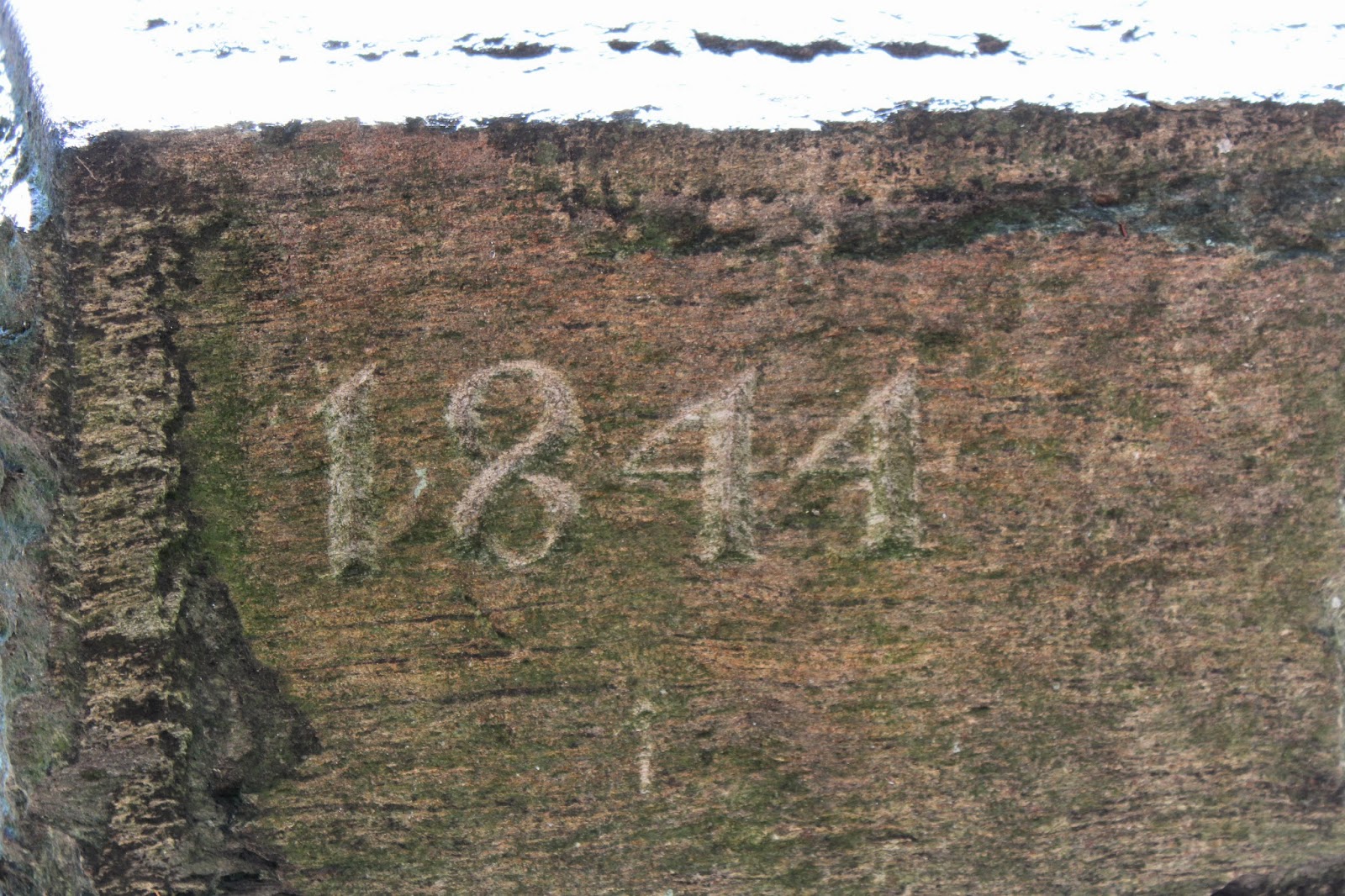 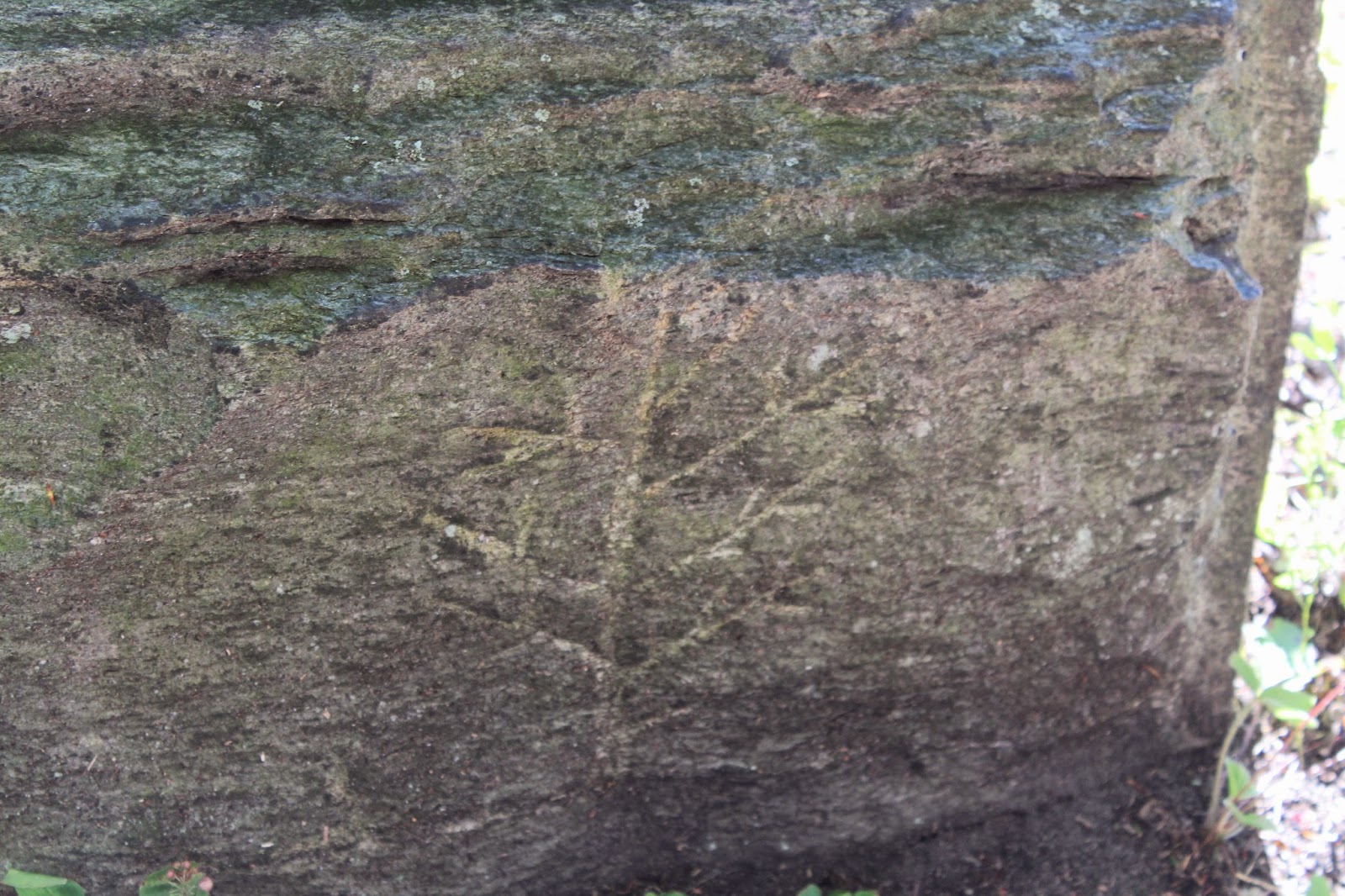 Impressed by what we had seen, we turned and started back to the cars.  The beautiful late summer day and the spectacular arches kept us deep in thought as we walked.  Here John Lutz and Mark Moritz amble side by side on the trail home. 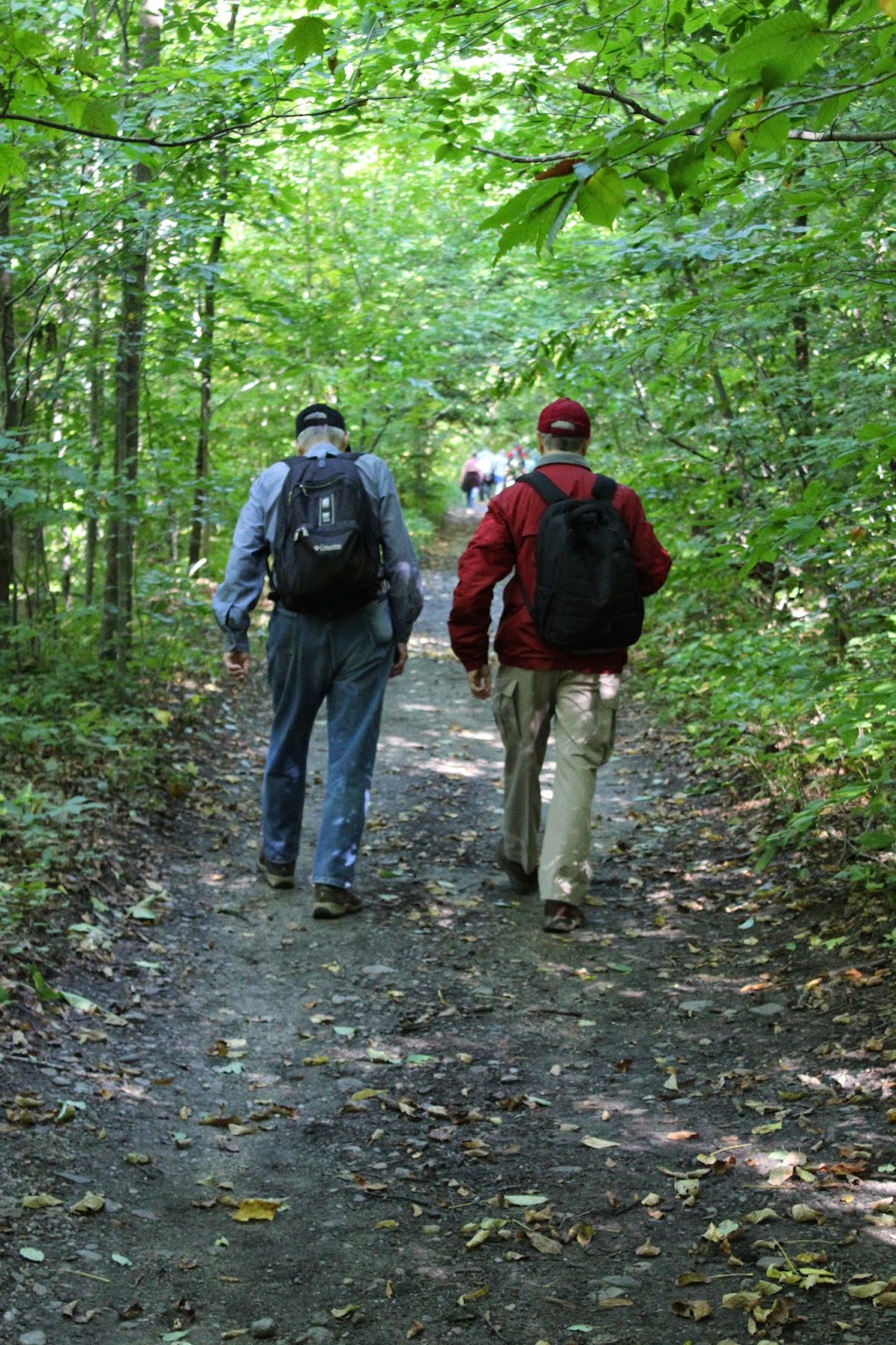 From Chester, Mark and I drove south and east to Somers, Connecticut, where we had both been invited to operate that afternoon on Bill Bouchelle's Spring Valley Railroad.  The Spring Valley is a fictitious railroad located primarily in New York in the 1950s-1960s.  The 11 by 20 foot layout is multi-level, point to point, with a main line run of 240 feet!  Bill uses a car card system with spotting orders, working on a time schedule.  There is no dispatcher on the Spring Valley. 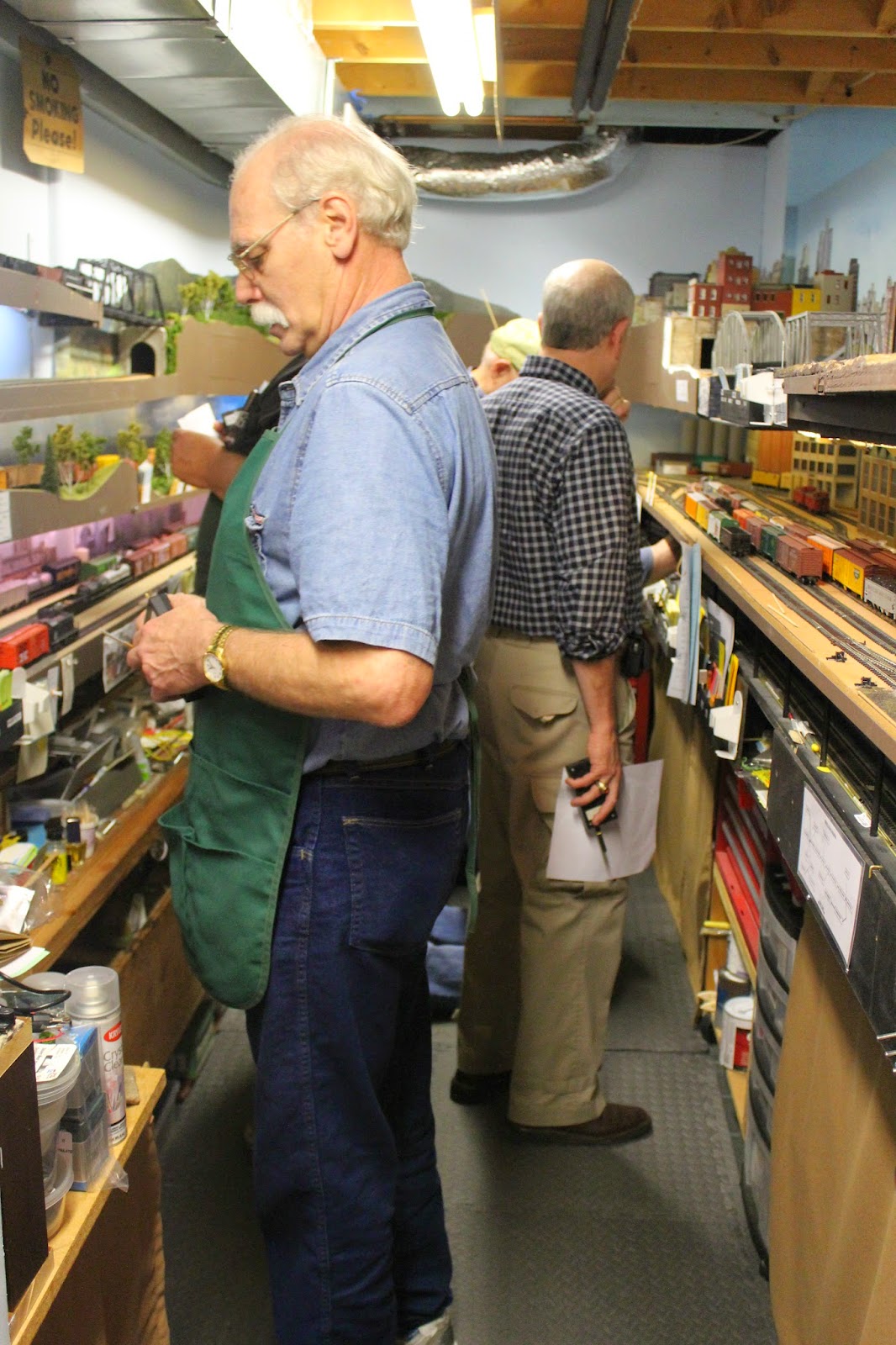 As can be seen from the above photo, this is a challenging layout to operate.  The aisles are narrow and crowded.  With three levels, several people may be working trains at the same location at the same time. 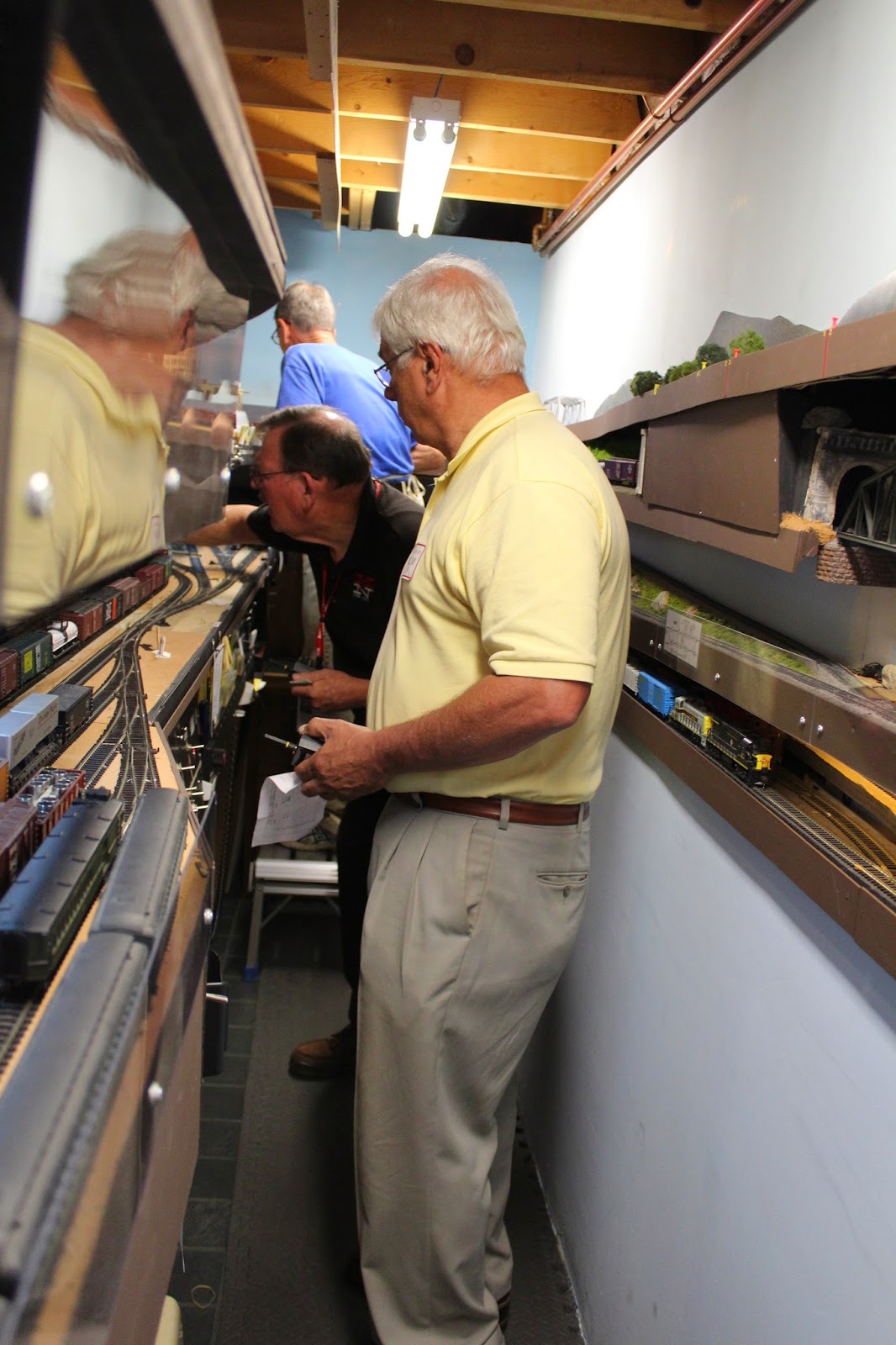 With all the traffic -- both on the railroad and in the aisles -- I felt lucky to have run three separate trains.  Bill uses NCE radio throttles, which makes getting around a little easier than if they were tethered.  Mark and I left around 4:30 in order to get back to Palmer in time for an evening clinic for which we had coincidentally both registered.

The "Poor Man's Hand Laid Turnout Clinic" was taught by Ken Belovarac and Dick Johannes.  The two hour class was a hands on experience in building a DCC friendly HO No. 6 turnout with code 100 rail.  The clinic provided the rail, spikes, vises for holding rails while filing, and a tie template on a piece of 1 x 4 soft pine.  Students were asked in advance to bring their own tools, including files, pliers, rail nippers, an NMRA track gauge, and a soldering iron.  Although the clinic ran out of time before we could finish, we did manage to build and solder the frog, and lay out the tracks.  This clinic was a good foundation for building my own turnouts, a requirement for the NMRA Achievement Award in Civil Engineering.

Saturday a train show ran all day in the Palmer Middle School.  The Hub Division (eastern Massachusetts), the Amherst Railway Society (western Massachusetts) and the Northeast Ntrack group (as well as several others) ran modular layouts in the school gymnasium.  Some of the modules were of contest quality. 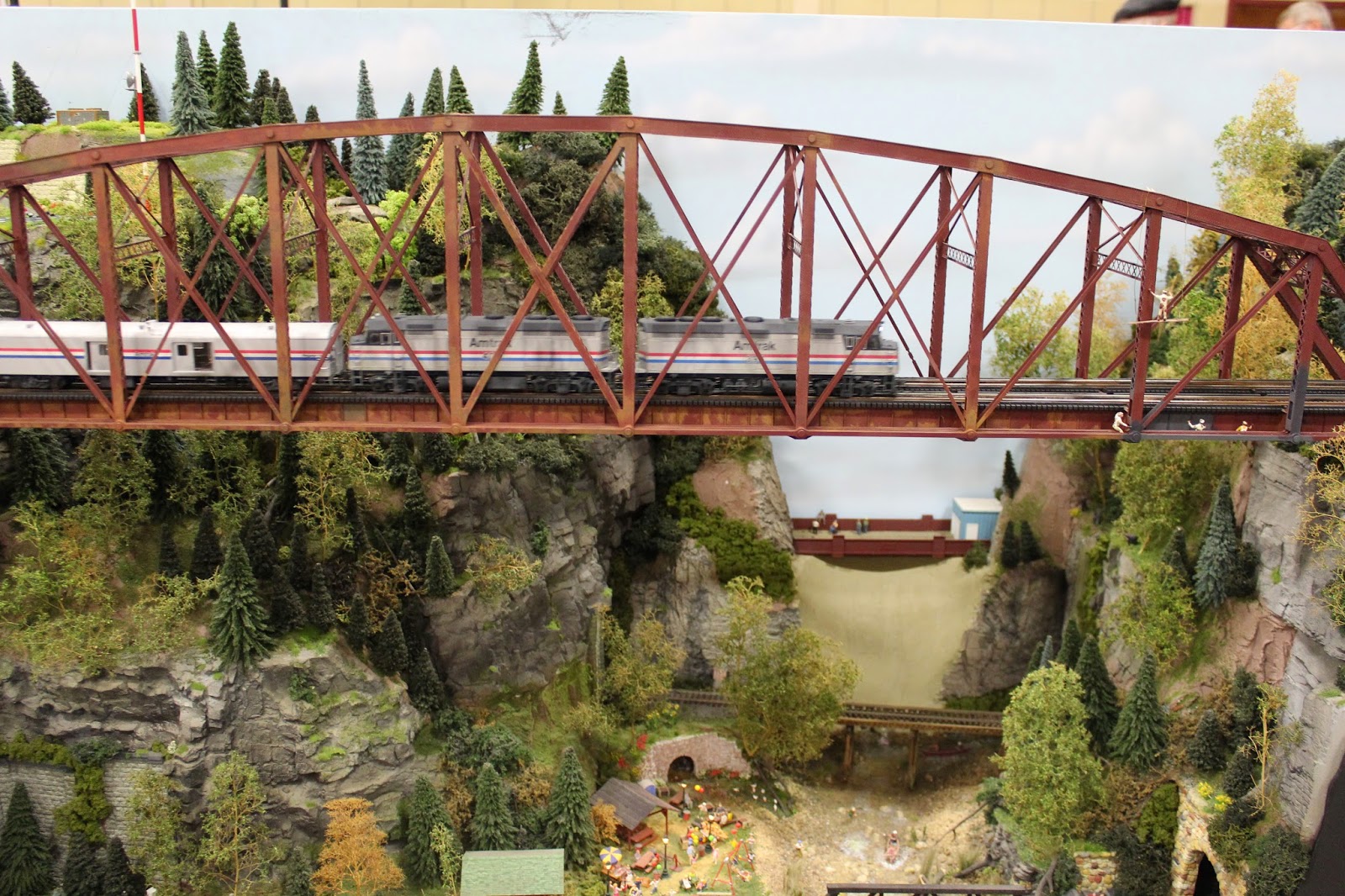 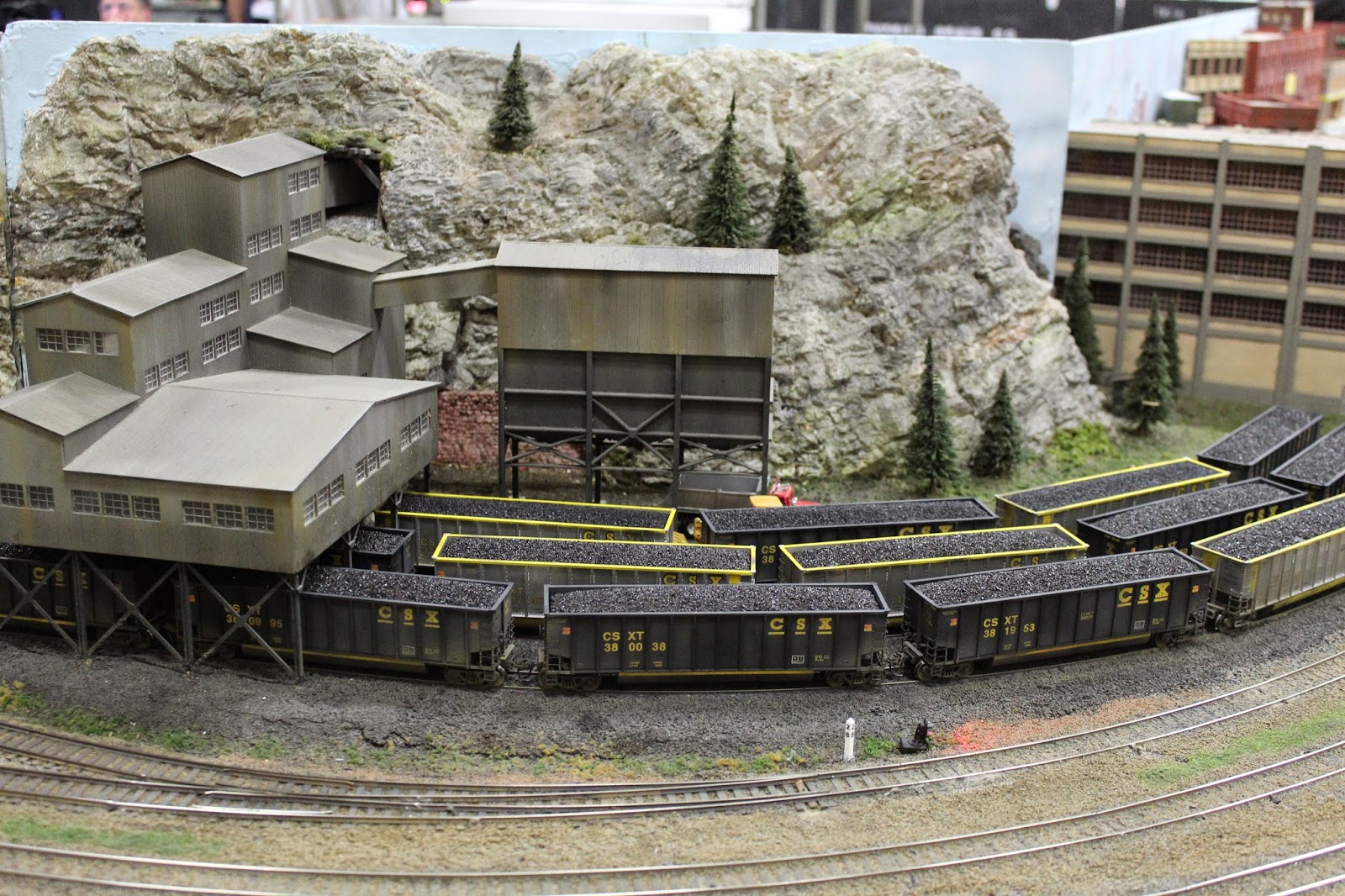 The magic of model railroading attracted enthusiasts both young and old.  Model railroad is fun! 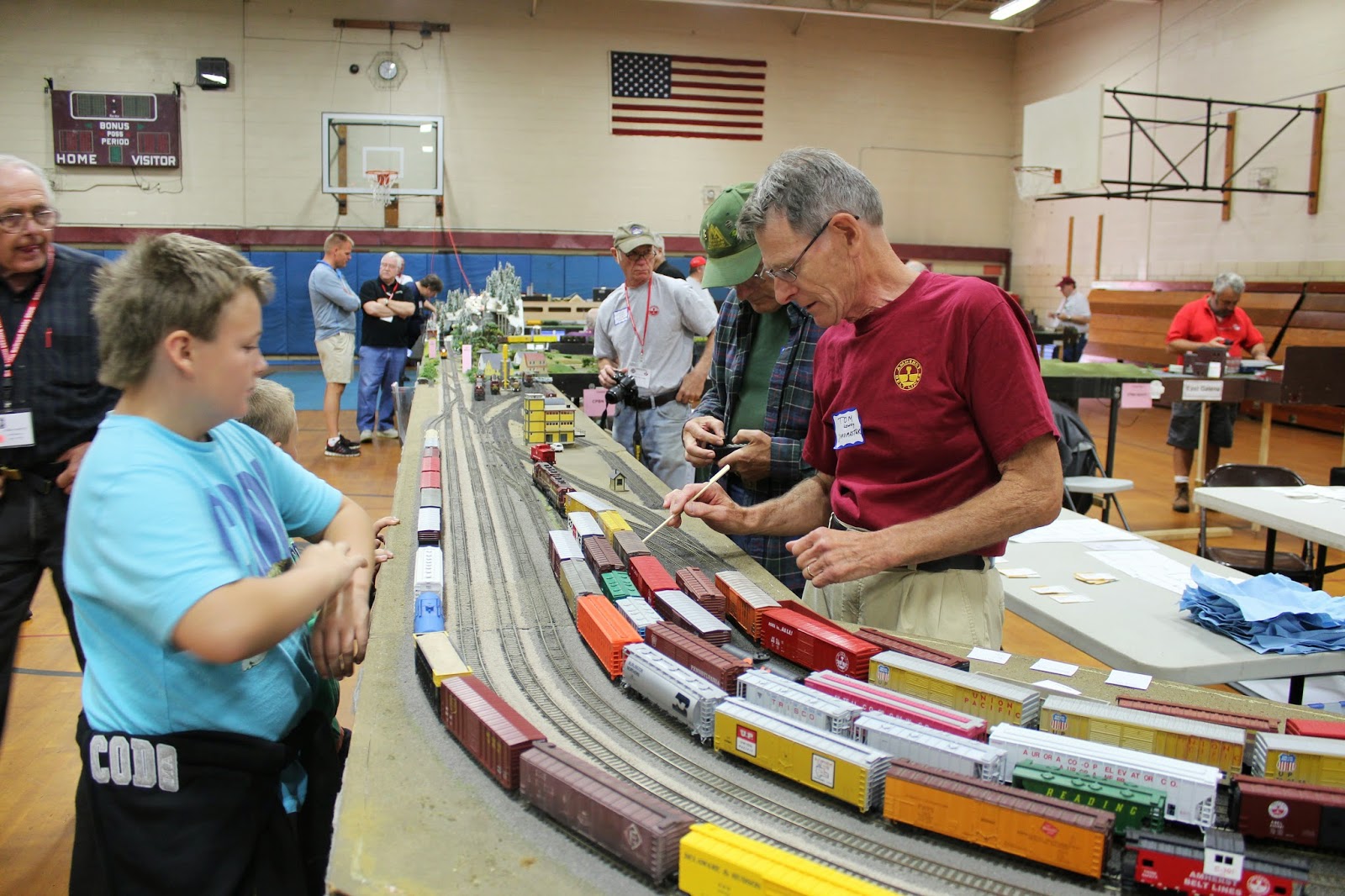 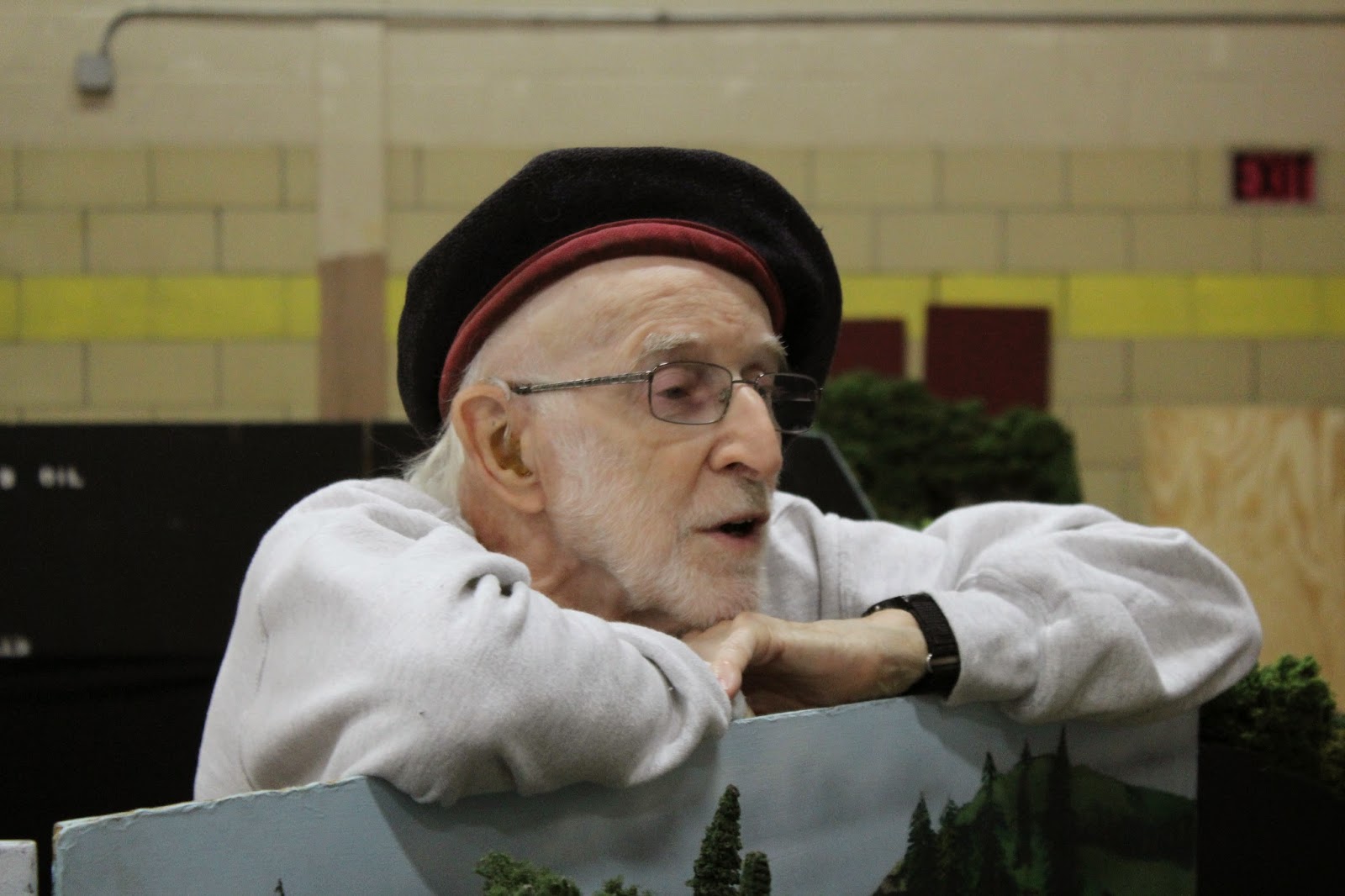 And speaking of contests, a number of modelers and photographers brought samples of their work to be judged on their merit in a separate room.  As a first time contestant, I entered two cars -- an East Broad Top combine and boxcar -- and a model of the stone farmhouse yard office and associated buildings at the EBT's shop complex in Rockhill, Pennsylvania.  The quality of the other entries was so extraordinary that I was sure I had no chance of winning in any category.

A number of clinics were offered throughout the day. I chose to sit in on an interesting class called "Road Sculpting" taught by Craig Vreeland.   Craig showed how to form smooth flowing roads with prototypical banked curves using cardboard forms and joint compound.  I plan to try out this new method on my own layout. 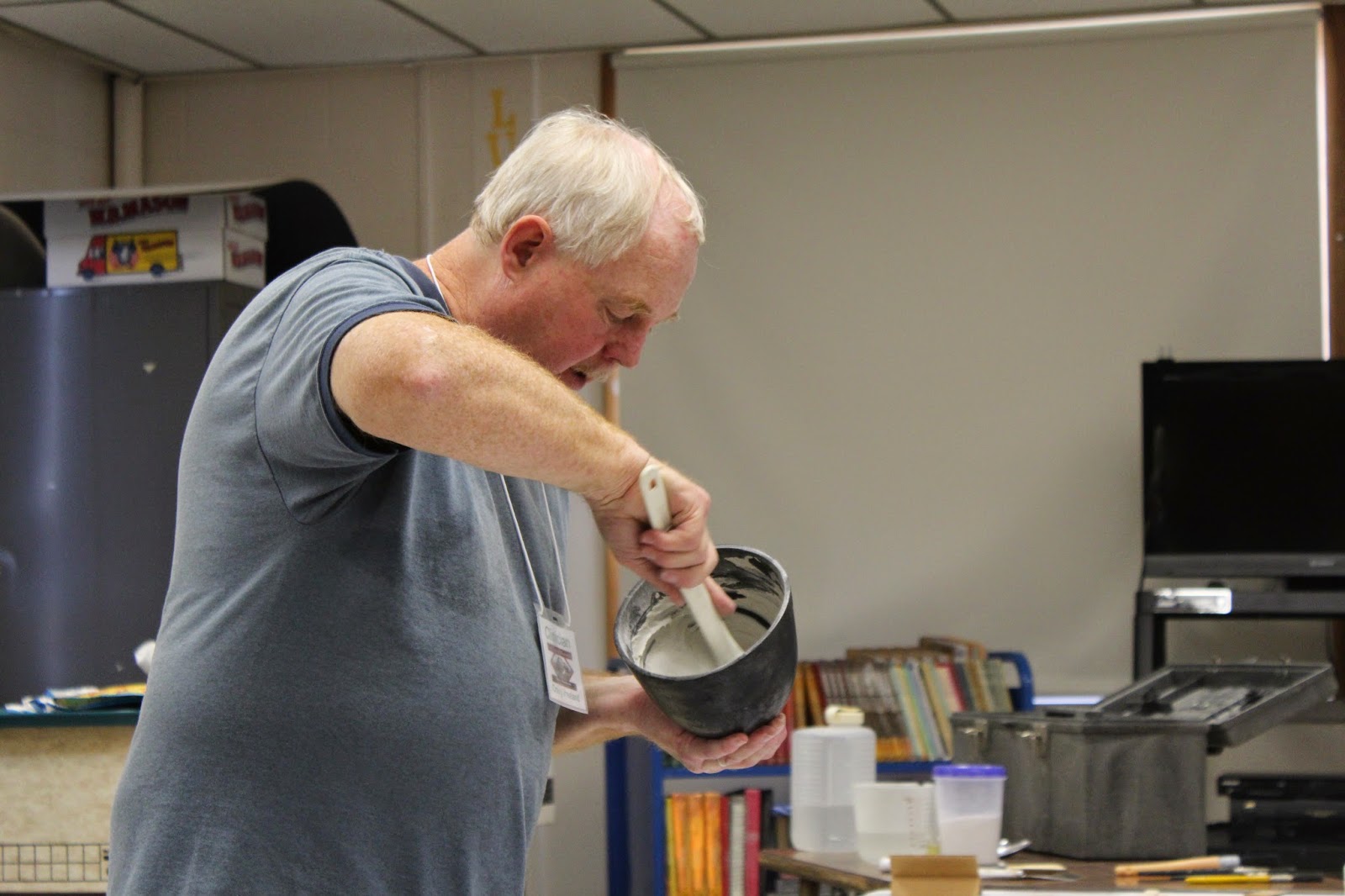 Craig's step by step method, illustrated by cardboard models, kept the audience interested for more than an hour of road building. 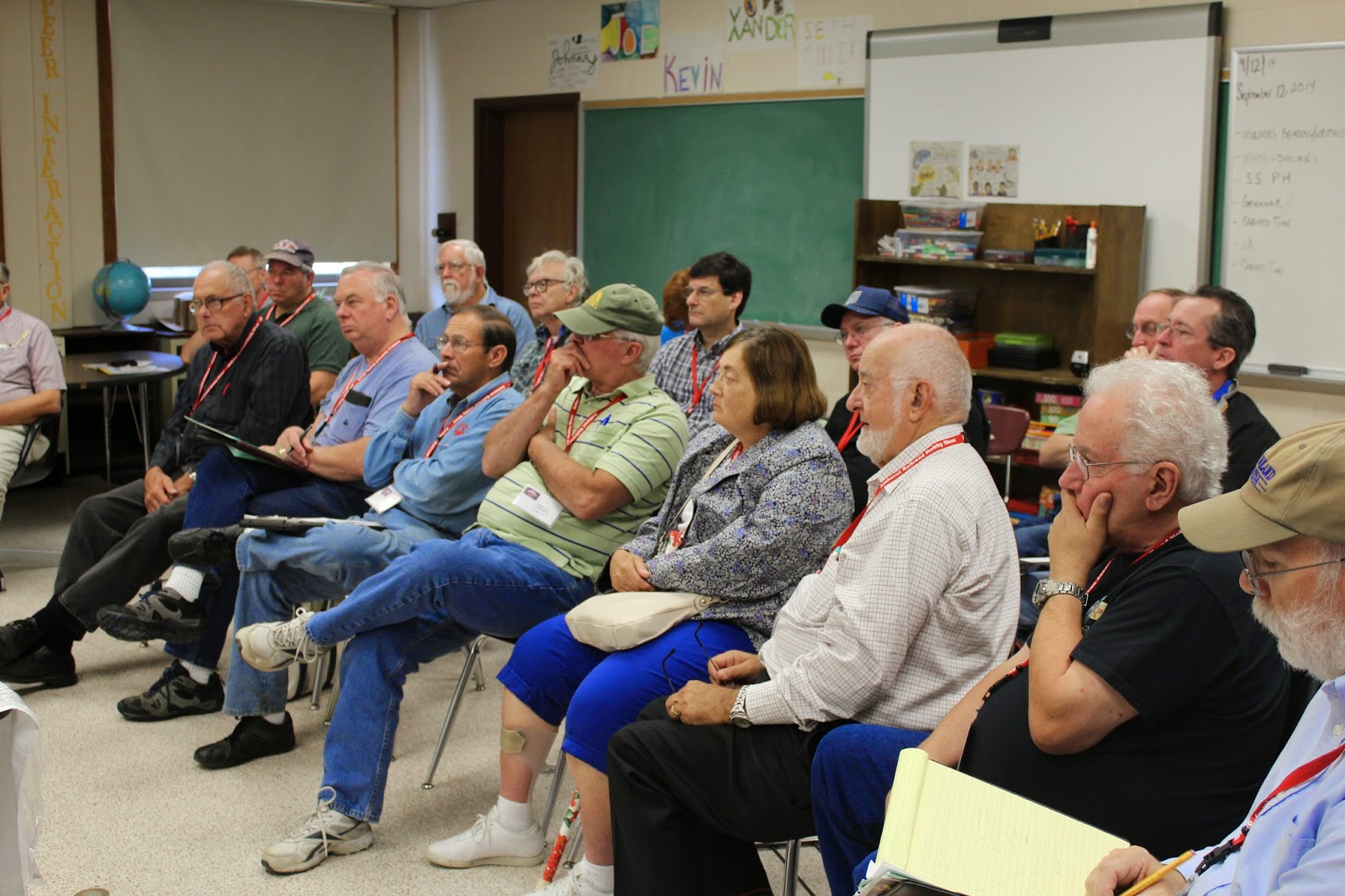 The finished product was amazingly realistic, done entirely with joint compound -- no other materials used! 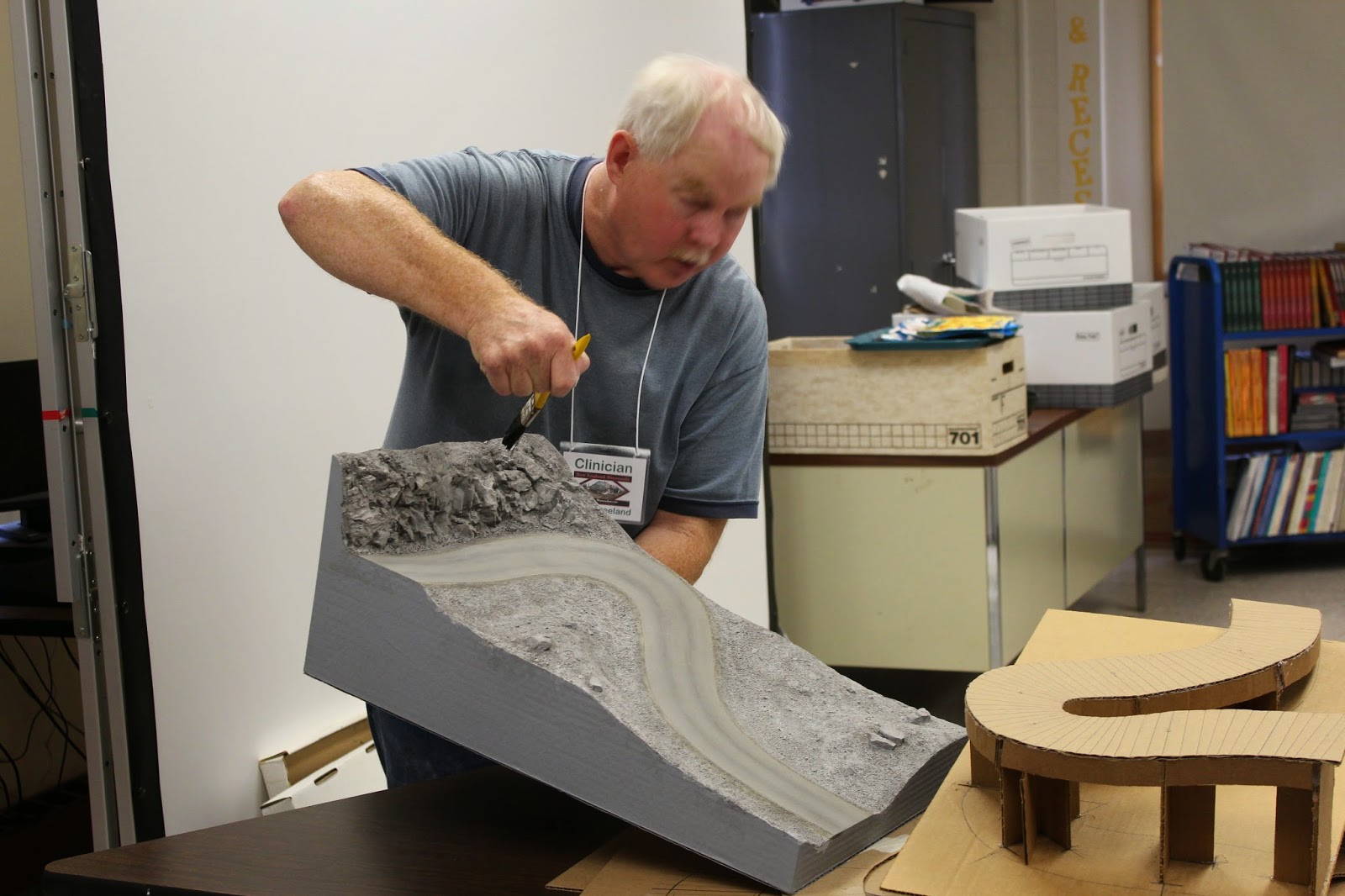 The day concluded with cocktails and the annual Convention banquet.  During the evening several CSX freight trains roared by the station, to the delight of everyone.

The Convention concluded with the Annual Meeting of the Northeast Region, followed by an awards breakfast.  Awards were given to entries in the photography and modeling contests.  To my surprise, I received a second place award for my model of EBT Combine #14 and a third place award for my EBT yard office and sheds. 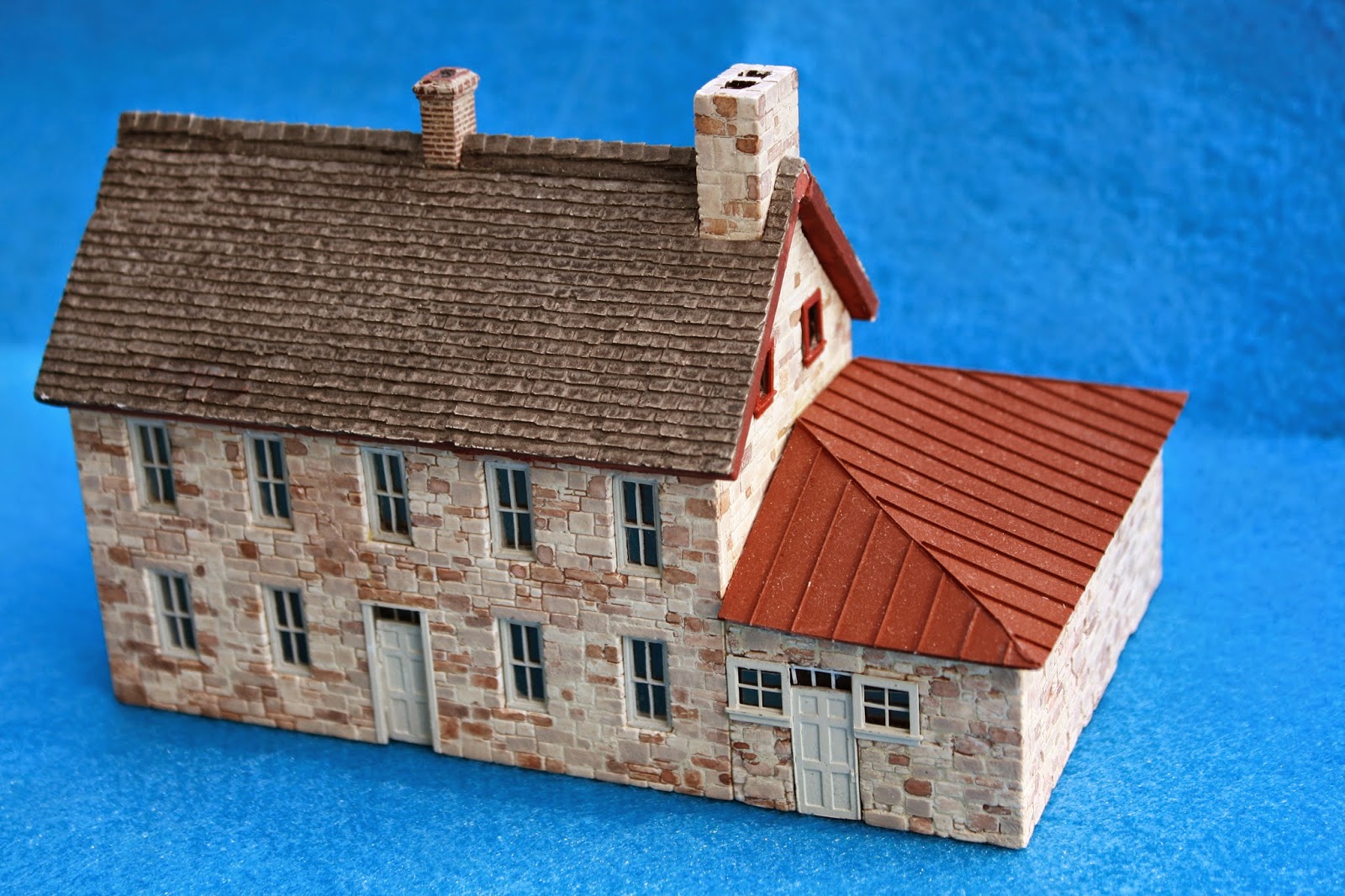 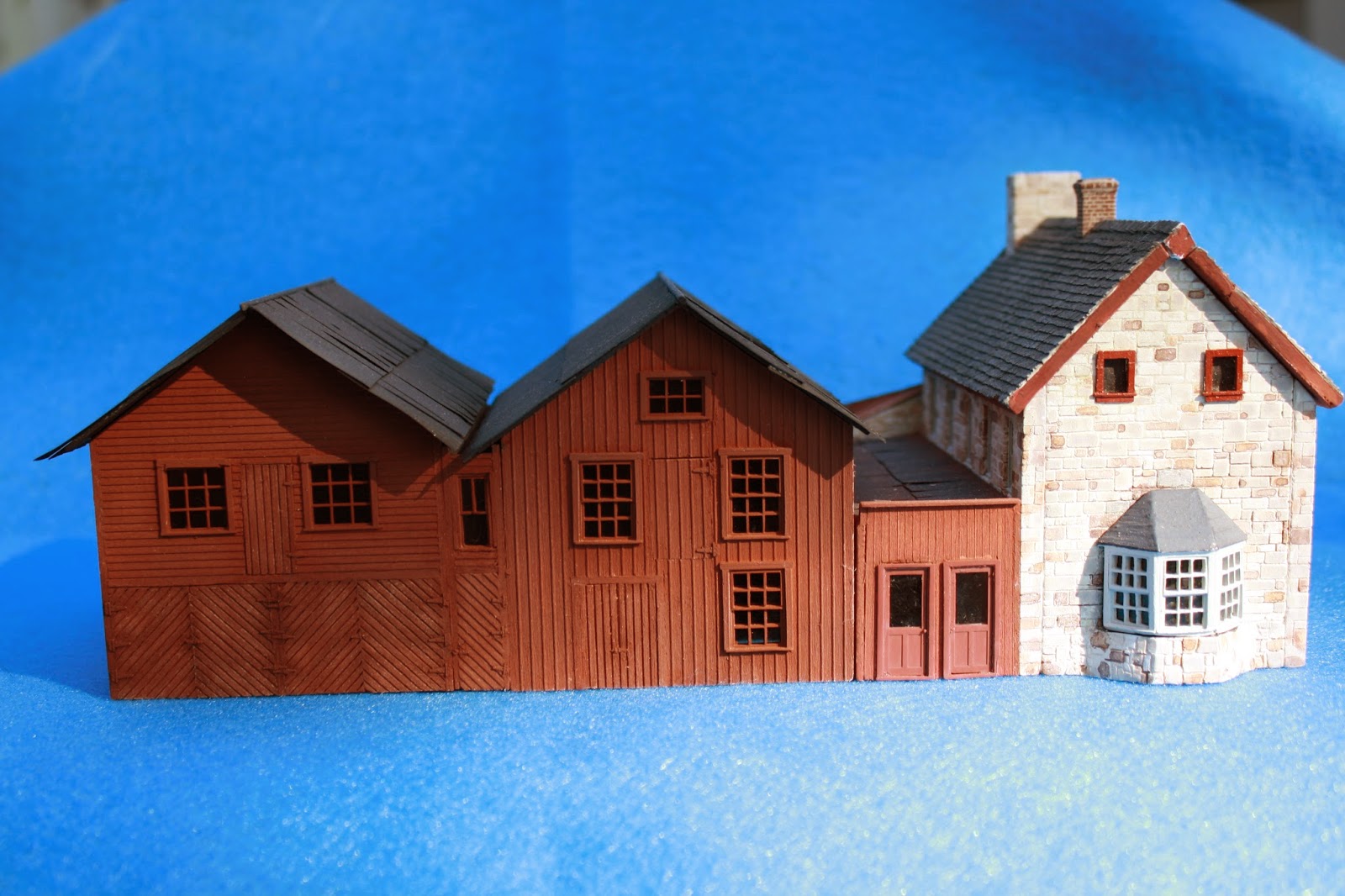 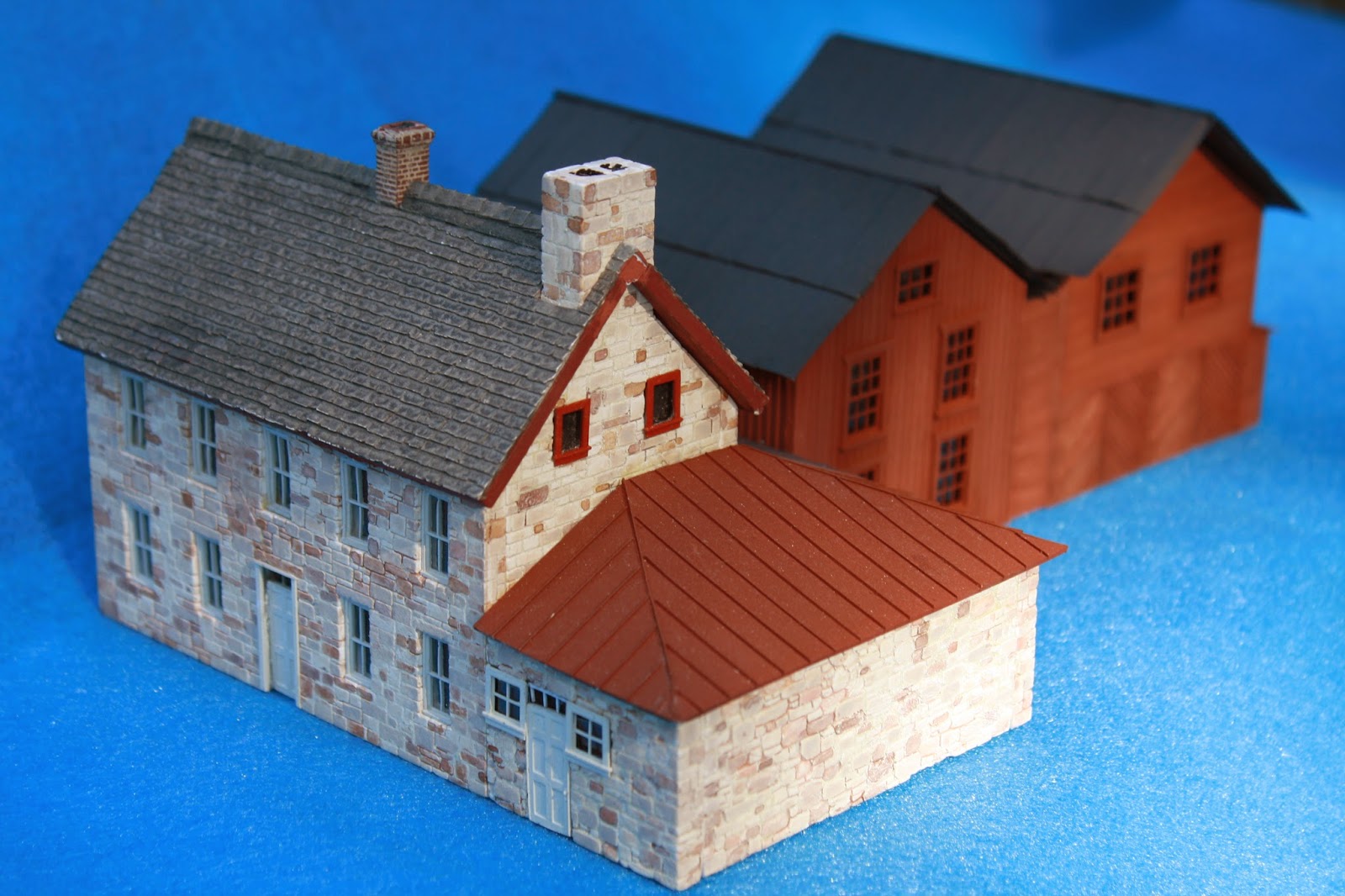 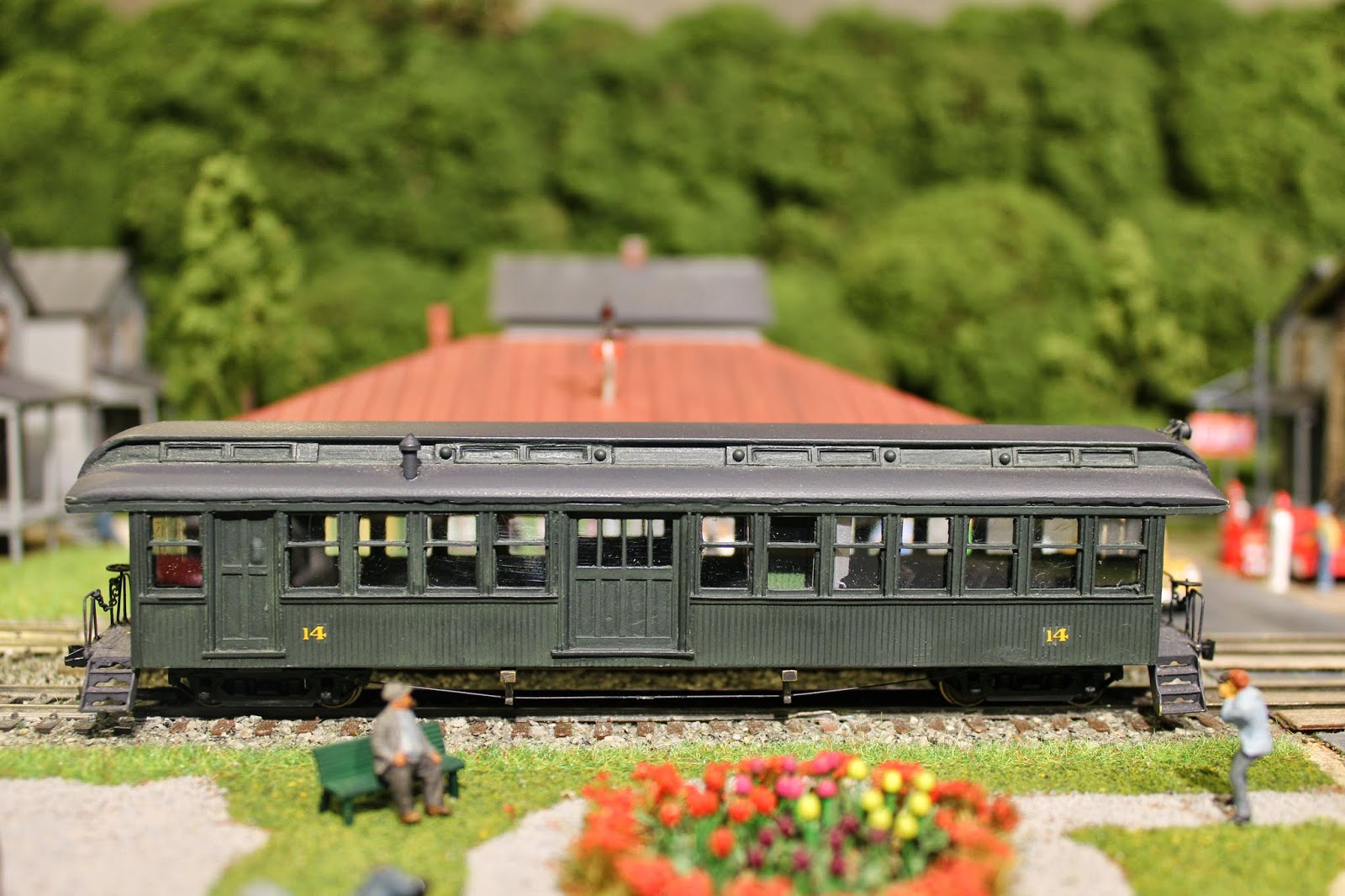 A large number of modelers were recognized for achievements in the NMRA AP program.  Mark Moritz received his AP Electrical certificate, and I was honored with certificates in Scenery and Structures. Four individuals had completed the requirements for Master Model Railroader and were recognized with a round of applause.  And with that, the New England Diamonds Convention of the Northeastern Region NMRA came to an official close.