New England is blessed with large numbers of model railroaders (maybe because of our long winters).  What some may not know is that we are also home to a number of small businesses that produce a wide variety of products aimed at those same model railroaders.  In fact, some of these kits are among the best in the country, with manufacturers like George Sellios' Fine Scale Miniatures, Bob Van Gelder's South River Model Works, Brian Bollinger's B.E.S.T. models; not to mention Bar Mills, Atlantic Scale Modelers, Fos Scale Models, Northeastern Scale Lumber Company and a host of others.

On October 14th and 15th I attended the Fine Scale Model Railroader Expo in Peabody, Massachusetts, along with some 300 other modelers and more than 30 manufacturers.  In addition to two rooms full of vendor tables, there were more than two dozen clinics on topics like backdrop painting, tree making, building waterways, lighting, painting, and weathering.  It was a model railroader's dream! 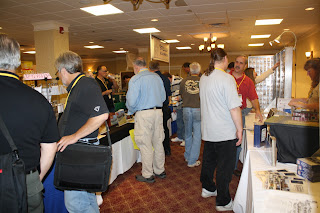 Among the more interesting clinics I attended were: a clinic on selective compression led by Mike Baker; one on prototype structure modeling by Brian and Jill Bollinger of B.E.S.T. models; an outstanding presentation by Jack Ellis of Bar Mills on structure building; and a wonderful conversation with Dave Frary and Bob Hayden on the evolution of their modeling efforts over 35 years of working together. One of the more interesting displays at the expo was the "Kit Factory", where you could watch a laser machine cutting out parts for a small passenger shelter, or spin casting metal detail parts, or molds being used to cast a resin tank car.  Afterwards, the parts were handed out as souvenirs for participants. 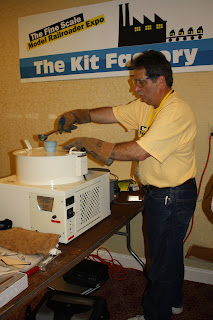 The expo also included contests for the best structure models, rolling stock and dioramas.  Some of the modeling was truly exceptional.   I gathered up my courage and entered my first contest, using a model I had scratch built of the old farmhouse yard office and attached storage barns at the East Broad Top's Rockhill Furnace shop complex. 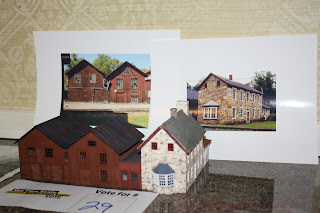 I was rather proud of my little model, having put a lot of hours into it.  But when I saw the caliber of modeling I was up against, not winning came as no surprise.  The surprising thing is that, rather than feeling discouraged, I was energized to improve my modeling skills -- especially in painting and weathering -- for the next time!  One of the exciting things about model railroading is that there is always room for improvement.  Here are a couple of outstanding models that took first prize at the expo. 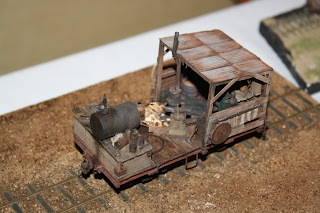 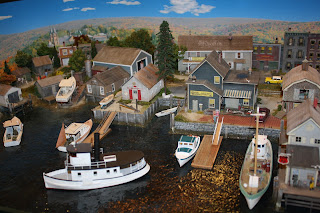 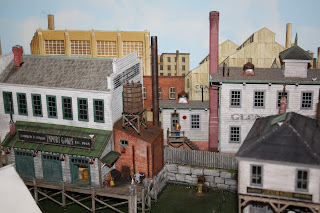 Of course, everyone looks forward to seeing the latest kits from various vendors.  I was shocked at how much some of these kits cost.  The cost for a Fine Scale Miniatures kit is often $300 or $400, and even less expensive kits by Bar Mills, Fos Scale, or B.E.S.T. run into the hundreds of dollars.  One manufacturer that seems to buck the trend is Jimmy Deignan's Railroad Kits, which had a marvelous display of excellent wood and plaster kits, many of which were less than $100.   I picked up a couple of these bargain basement kits for a reasonable price! 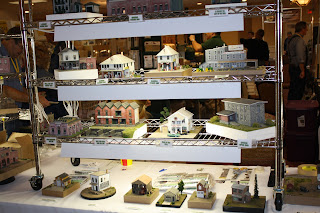 All-in-all, the expo was a great opportunity to meet other modelers, learn about the latest techniques in making and building high end kits, and be re-energized to get back to work on my own layout.  Next year's expo is tentatively slated for Lancaster, Pennsylvania, home of the Pennsylvania Railroad Museum.
Posted by Russ Norris, MMR at 6:55 AM No comments:

Making Friends Along the Way

One of the great  things about this hobby is meeting people who share a common interest ... and sense of humor!  There may be a few "lone wolves" out there who, like the famed John Allen, labor quietly away in their garage, basement or attic, unknown to the rest of the world.  But in recent years I have discovered a bunch of wonderful people who enjoy sharing their work and having fun.  You can meet some of these folks at national or regional train shows and conventions, but I've made a lot of new friends on the internet.

Specifically, I belong to several Yahoo groups -- HOn3, HOn3 Chat, and HOn3 Modelers -- where I have come to know some really great people.  I count as friends folks like David Hoffmann in Mississippi, who makes and sells outstanding brass castings and kits, or Laurie McLean in Australia, who has gone out of his way to help an old duffer on Cape Cod figure out the intricacies of digital decoders!  Sometimes I discover a fellow narrow gauge enthusiast living just around the corner -- as when I discovered that my neighbor, Dave Trimble, is modeling the Rio Grande Southern in his basement.  I can walk to his house, but might never have met him were it not for the internet!

One of the most enjoyable on-line groups is the HOn3 Chat group -- a rowdy, sometimes quirky group of enthusiasts from as far away as Australia, England, Europe and the Middle East, who share a common passion for narrow gauge railroading colored with a raucous sense of humor.  Under the pretense of living in the old railroad town of Silverton, Colorado, members have adopted nicknames like Scoop, Preacher, Mayor, Outlaw, and Barkeep.  The group's fictional adventures appear periodically in an on-line newspaper called the Silverton Sub-Standard Gazette (SSSG).  This has led to a "world tour" of HO sized "little people" representing our on-line characters, who have been mailed to various members of the group.  These folks, in turn, take photos of the visitors on their layouts, complete with an accompanying story, which is then published in the SSSG.  Not long ago the world tour arrived at my railroad, with the good citizens of Silverton in hot pursuit of outlaws who had stolen a prize bull.  Here is a photo of the posse arriving at the Blacklog railroad station to the amazement of the locals. 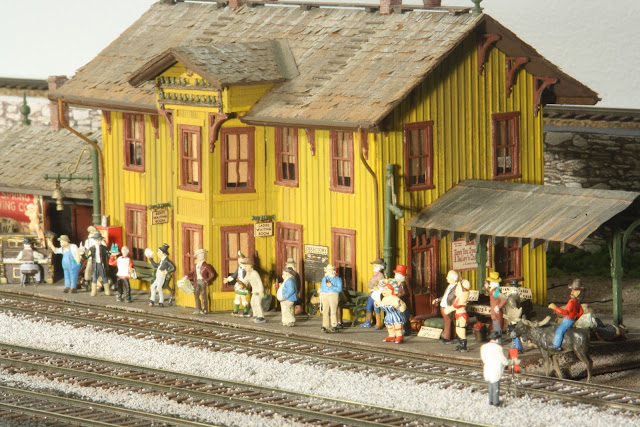 The outlaws steal an East Broad Top locomotive and flatcar to make their escape with the prize bull. 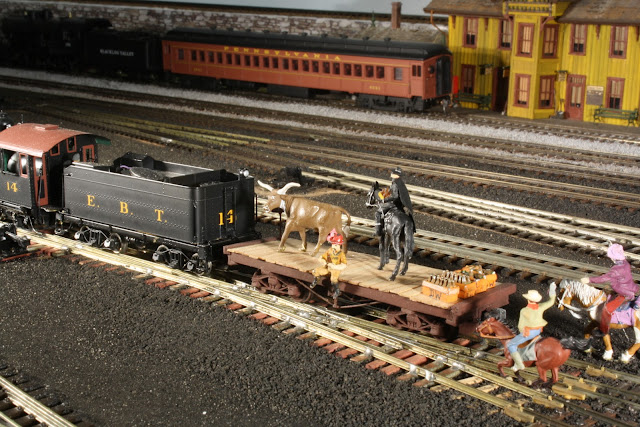 But the posse commandeers a Shay locomotive and crew, with their own flatcar, and chases the outlaws. 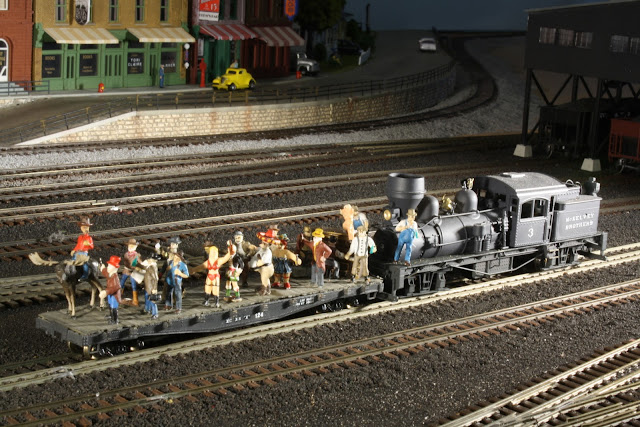 All of this is in good fun, of course, and the fictitious escapades of the little folk give the members of the group a chance to share some of their modeling along with a few chuckles.  Every once in a while we actually meet in person, and a name on the internet becomes a friend in the flesh.  Just yesterday, a member of the HOn3 Chat group from Minnesota arrived on Cape Cod with his wife for a visit.  John Niemeyer (alias Reverend) and his wife, Marion, came to visit yours truly (Butch) and my neighbor, Dave Trimble (Springs).    We had a chance to share our layouts with the visitors, then everyone went down to the harbor for a tasty fish dinner and conversation.  Here are the three modelers (Butch, Reverend and Springs) with the town of Blacklog behind. 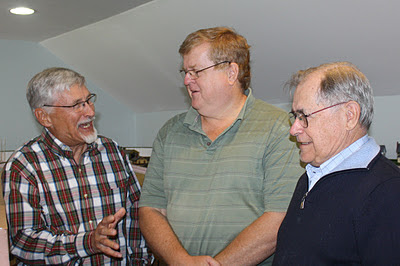 Model railroading is a wonderful hobby.  It offers endless hours of satisfaction and involves skills ranging from construction to electronics; but for me, one of the best parts of the hobby is the chance to make friends who share a common passion from all over the world.
Posted by Russ Norris, MMR at 6:15 AM 2 comments: