Modeling the NARCO tipple did not seem like a difficult project.  After all, it was just a big box on stilts.  But once I started working on plans for the structure I ran into a problem.  There are no plans or drawings for the tipple, nor was I able to track down the dimensions of the "box".  There are a fair number of photos of the tipple, but always on an angle, never head on.  Perspective made it difficult to figure out the size of the structure by simply comparing it with nearby objects like hopper cars or a locomotive.  A friend sent me some remarkable color photos he found on the internet showing the tipple's demolition -- one even showed the tipple on its side with a clear view of its construction.  This last picture even had a man standing next to the fallen tipple.  But in spite of all this photographic evidence, the precise dimensions were elusive. 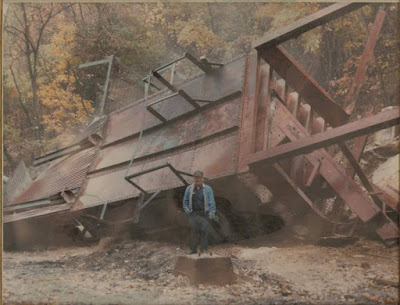 In the end I used a variety of sources to nail down the dimensions.   A fellow EBT enthusiast -- Ron Pearson -- has also modeled the tipple.  He estimated the dimensions at 15 feet on a side.  He also had worked out the height of the bunker to be 15 feet, with another 15 feet for the corrugated metal structure at the top (which I assumed contained machinery for the conveyor mechanism)..  I eyeballed the photos and it seemed to me the corrugated section on top was shorter than the rock bunker beneath it.  I ended up with an overall height for the tipple about the same as Ron's model -- roughly 30 feet -- but I made the structure on top only 12 feet high and the bunker itself 20 feet high.  Here is a photo of Ron Pearson's model. 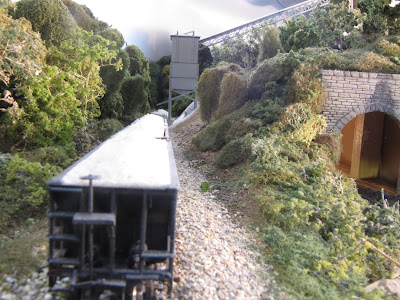 Using my estimated dimensions, I calculated the amount of ganister the tipple could hold to be 4500 cubic feet (15x15x20).  Since hopper car capacity is measured in thousands of pounds rather than cubic feet, I had to calculate the weight of the ganister when the tipple was full to determine if my dimensions would allow enough ganister for a typical four car train.  Starting with the density of quartzite (in grams per cubic centimeter) I calculated that the tipple could hold approximately 500,000 pounds..  Knowing that the EBT ran four hopper cars up the mountain for a load of ganister, each car with a capacity of 70,000 pounds, I reasoned there was enough ganister to fill two trains of four cars each on a daily basis.

With the preliminary work done, I cut out the sides of the bunker from .040 Evergreen sheet.  Since photos of the tipple suggested that the corrugated panels on the top overlapped the steel bin itself, I started by assembling the complete structure with the assumption that the corrugated part would be cut from styrene sheet and cemented to the outside of the tipple. That would give the model more structural strength that trying to create separate upper and lower sections and glue them together.

The color demolition photos (see part l) were very helpful in determining the details of the tipple's construction.  They clearly show steel angle riveted to the corners for strength.  Two other verticle angles were riveted on each side as well.  When I added these details, the tipple immediately began to  resemble the prototype. 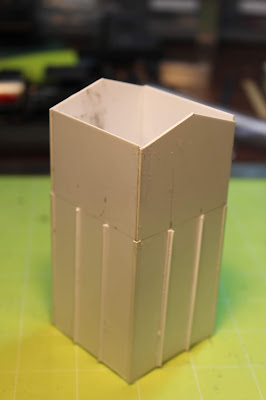 A cursory examination of the prototype reveals structural elements (probably angle iron) on the sides and top of the top structure, which I assumed were to support the end of the conveyor assembly.  A photo of the rear of the tipple from above (see part l) clearly shows the beams that ran down the sides and across the top of the roof.  I used Evergreen angles to construct these details.  For the legs of the tipple I used 1/4 inch styrene angle, which was cut to fit the slope of the hill on which the tipple would stand.  The legs run up the inside corners of the tipple and are cemented in place with Plastic Weld. 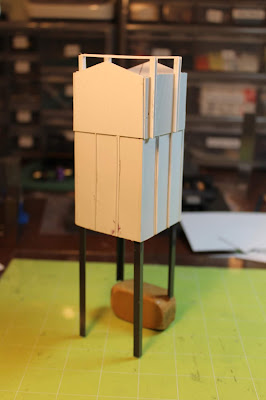 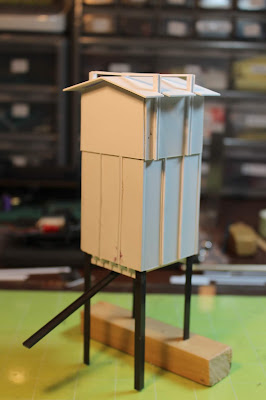 The photo showing the tipple on its side after demolition clearly shows lines of rivets running up and down the angle strengtheners as well as across the sides, presumably connecting the sides with internal structural supports.  I used Archer decal rivets to recreate the effect.  Following the Archer instructions, I used Micro Sol Red decal setting solution to fix the rivets in place. 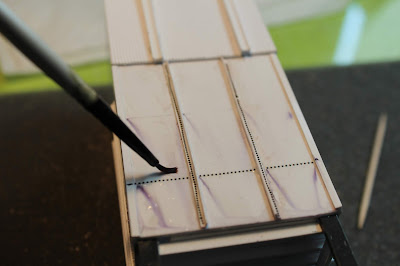 This was a tedious process, and I found the lines of Archer decals very delicate and prone to breaking into several pieces which then had to be moved around with a fine brush and a wooden toothpick.  But the end result was worth the effort. 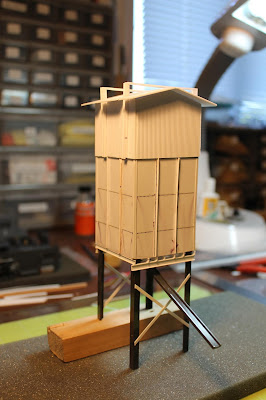 Sadly, as impressive as the rivet detail appears in the photo, when the model was painted, much of the effect was lost.  The rivets are barely visible on the finished model.  But I know they are there! 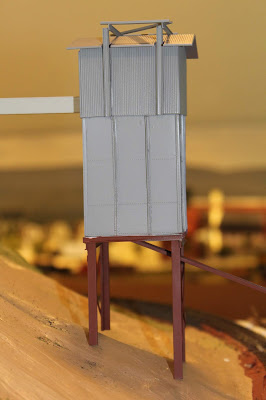 The photo of the demolished tipple shows in some detail the underside of the structure with the details of the support beams, made of heavy channel stock.  Careful examination of the photos failed to clarify exactly how the chute was located between the support beams, so I simply slipped it between two of the supports and cemented it in place with Plastic Weld.  When the structure was finished the underside of the tipple is not particularly visible anyway. 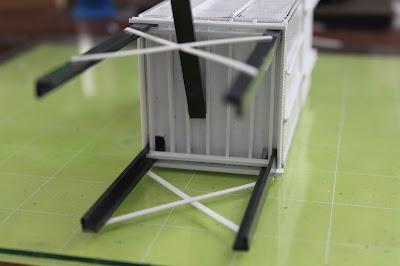 The tipple is connected to a conveyor that brings crushed ganister rock from the quarry above and behind the tipple.  I used a Walthers kit for a set of modern conveyors.  The kit contained parts for three sections; I needed only two to reach the quarry, partly hidden by trees at the top of the hill.  To support the conveyor a hole was cut in the back of the tipple. 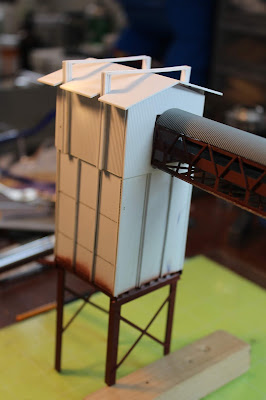 The tipple was painted with a gray automotive primer.  The bottom of the tipple and the support legs were painted with red primer, giving the whole structure an industrial effect. 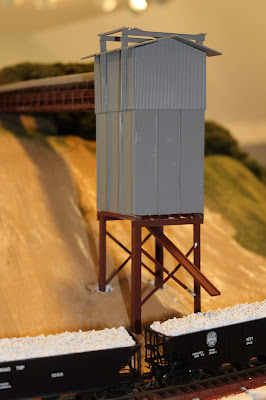 The quarry above the tipple was covered with clay kitty litter to give the impression of broken rock.  The crusher was made from a warehouse taken from a different kit and painted gray with the same dull red primer for the roof.  The hillside was covered with off white ballast to resemble ganister than had fallen off the conveyor.  The same light colored ballast was scattered along the tracks where hopper cars would be loaded.  Compare the photo below with a photo of the tipple as it appears on the layout. 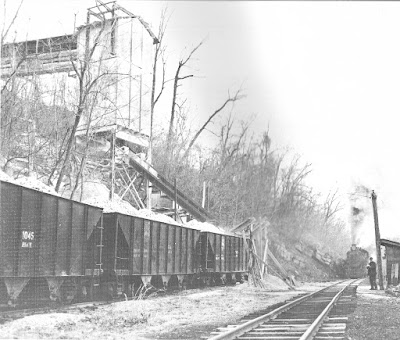 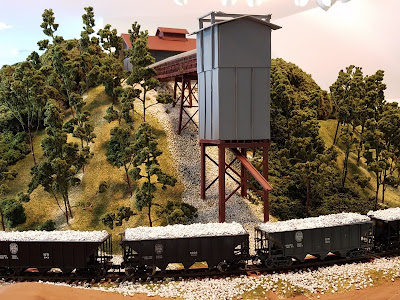