The 2019 National Narrow Gauge Convention was held the first week in September at the Hilton Double Tree Hotel in Sacramento, California.   My wife and I arrived on Monday, the 2nd, giving us a couple of days to familiarize ourselves with the area.  For me, the convention really began on Tuesday with a tour of the historic Sacramento Locomotive Shops, a short walk from the California State Railroad Museum (CSRM) in Old Sacramento on the banks of the Sacramento River.  We began our adventure in the former headquarters of the Central Pacific Railroad. 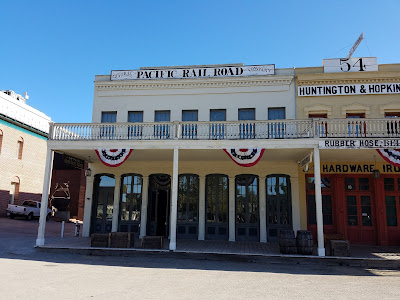 Walking past the adjacent CSRM the group descended into an underpass beneath the Union Pacific tracks to the mammoth shop complex. 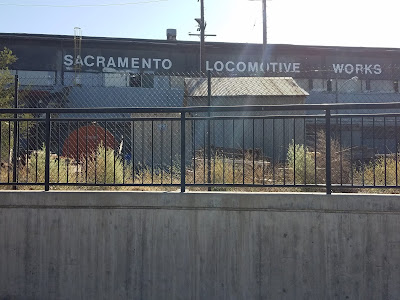 This was a special treat, as the shops are in daily use by the CSRM for housing and working on their superb collection of historic locomotives and rail cars, and visitors are generally not allowed.  We were met at the entrance to the machine shop by a group of docents who guided us through the facility.  Hard hats and steel toe boots are normal requirements for entrance. 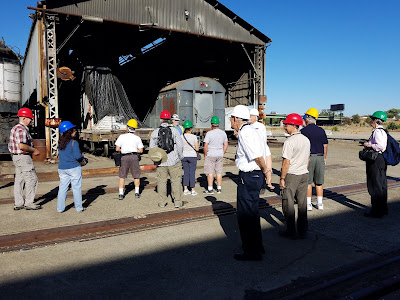 The complex consisted of two long structures separated by the tracks for a transfer table (visible in the distance) used to move engines and cars from one building to the other. 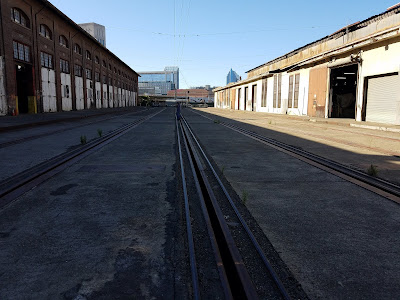 The shops date from the middle of the 19th century.  Standing at one end of the machine shop one can see the original roof trusses and beams stretching away into the distance.  At the height of their use thousands of men worked in these shops.  The noise must have been deafening. 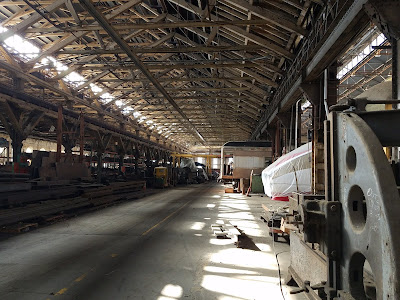 After a brief visit to the machine shop, the group walked across the transfer table track to the locomotive shop, where much of the CSRM's collection is stored.  The tour group was divided into two sections, and each was assigned a docent who walked us through the facility, pointing out rare and one of a kind exhibits. 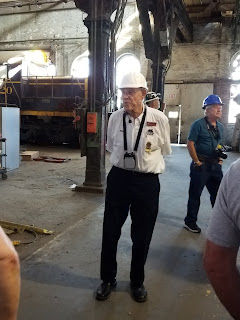 When the shops were built back in the 1860's, they were much smaller than they are today.  The Central Pacific decided it was too expensive and time consuming to send locomotives back east for service and repair, so they built the first shop at what is now one end of the locomotive shop.  In the early days machine tools were powered by overhead belts and pulleys, the supports of which can still be seen hanging from the rafters.  As the railroad grew the buildings were enlarged by extending them into the structures as they exist today.  But there are still parts of the facility in use that are over 150 years old. 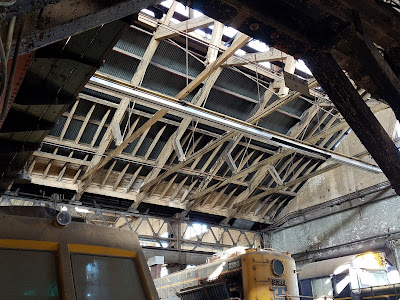 The shop complex is a huge, echoing place where time appears to have stopped.  Here are some images of what we discovered in dusty corners of the facility. 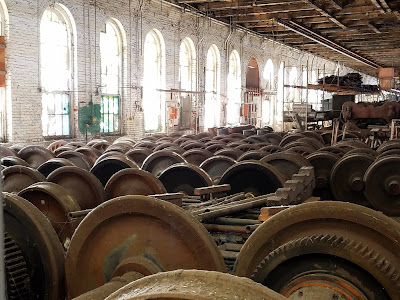 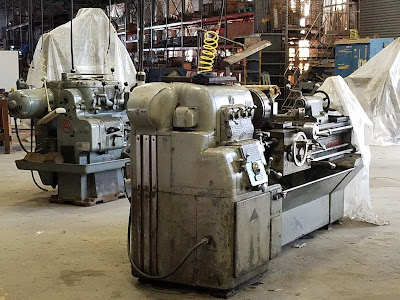 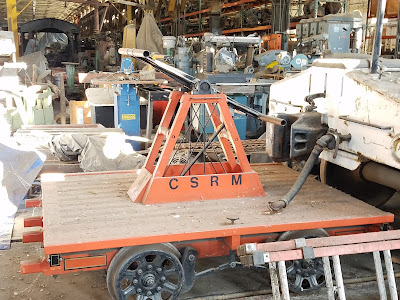 The CSRM has an incredible collection, most of which are standard gauge, but there are some examples of narrow gauge locomotives and cars.  Here is a sample of what we saw on our tour. 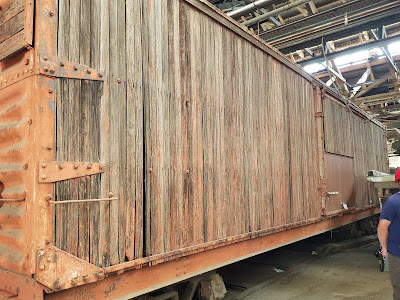 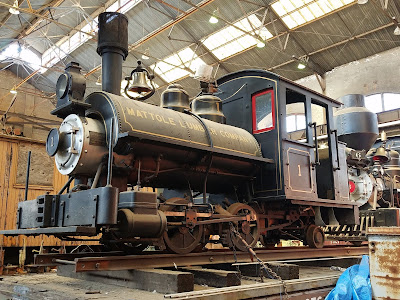 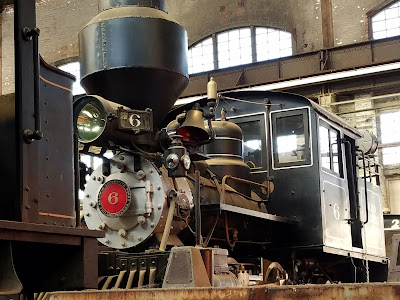 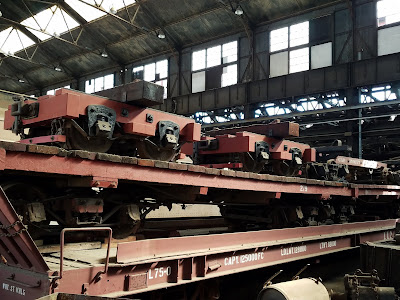 There were plenty of examples of more modern equipment, including diesel electric locomotives  that were turning points in locomotive power and design. 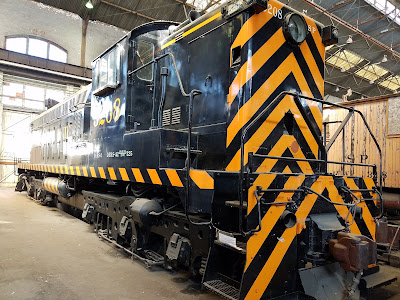 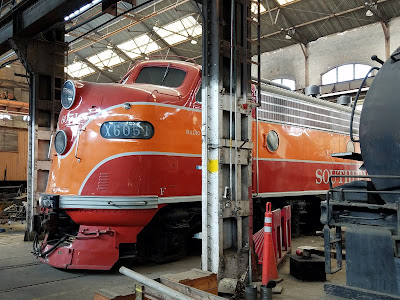 The size of these enormous machines was impressive, but the museum also has examples of technical advances that made modern railroading possible.  We saw an example of the 1930 Winton diesel engine, one of the forerunners of modern prime movers. 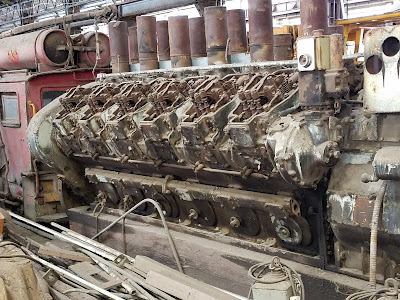 Our guide then led us to one of the direct descendents of this early example of diesel technology, a modern 16 cylinder prime mover used in the Amtrak locomotive next to it. 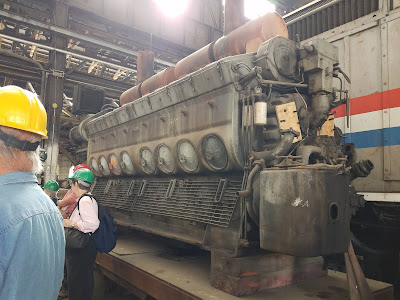 My first electric trains were, as for so many of us, Lionels.  One of my favorites was a Santa Fe war bonnet diesel that pulled a string of fluted silver cars around the Christmas tree.  The diesel and cars are long gone, but I was delighted to find the prototype for my Santa Fe engine in the shop museum. 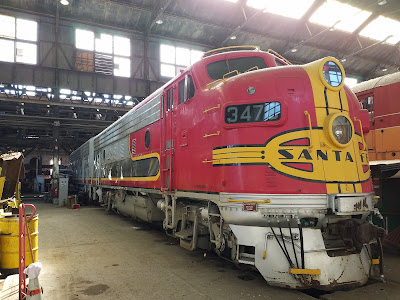 I lost touch with allmost all my old Lionel trains until a few years ago.  A cousin of mine called from New Jersey to ask if a cardboard box of old trains in his attic might be mine.  It was, and 60 years after I last saw it a Western Pacific A-B lashup is now on display in my train room.  It is the spitting image of the WP diesel we saw in the Sacramento shops. 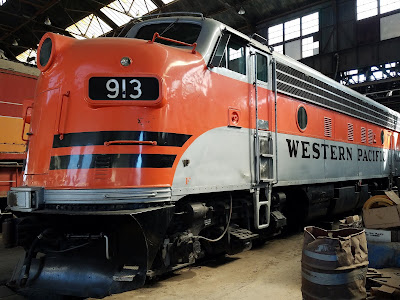 This concludes part 1 of my report on the 39th National Narrow Gauge Convention.  Part 2 will focus on the California State Railroad Museum itself, with a glimpse of the new exhibit being prepared by the National Model Railroad Association.
Posted by Russ Norris, MMR at 6:12 AM